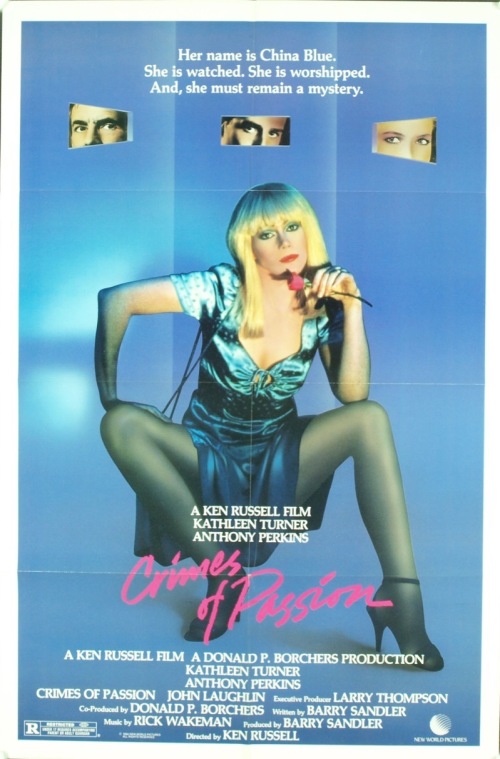 4-Word Review: Moonlighting as a hooker.

Bobby (John Laughlin) is suffering from marital problems at home while also having trouble keeping up with his kid’s expenses, so he looks for a part-time job and gets hired by Lou Bateman (Norman Burton) an owner of a fashion clothing studio to work as a private investigator by following around one of his designer’s named Joanna (Kathleen Turner) who he is convinced is selling his patents to a competitor. What Bobby finds instead is that Joanna is actually working as a hooker in the seedy red light district and using the name of China Blue, which gets Bobby more infatuated with her. Soon they are locked into a passionate affair, but unaware that China/Joanna is also being stalked by a crazy street preacher named Peter Shayne (Anthony Perkins) who is suffering from demons of his own while also harboring strange ideas on how to ‘save her’.

The film, which is directed by Ken Russell who can sometimes be brilliant and other times horribly self-indulgent, is annoying from the beginning. The recreation of a therapy group is wooden and artificial and the sex scenes are over-the-top with characters that are one-dimensional and poorly fleshed out. The gaudy color schemes and flashing lights used to recreate the seedy hotel look quickly become repetitive and irritating. It’s hard to tell whether Russell is trying to be serious or campy, but it’s a mad mixture that ends up being a pointless mess. Rick Wakeman’s obnoxious electronic music score and the cliché ridden Psycho-like finale simply add insult to injury.

The script by Barry Sandler is shallow and filled with plot devices that make no sense. Rarely do prostitutes ever fall in love with one of their clients and many create a defense to keep that part of their lives separate from their personal one and vice-versa, so the fact that Joanna and Bobby get into a relationship so quickly and seamlessly while failing to explain why she would find Bobby so ‘special’ out of all the other men she had already had indiscriminate sex with makes this dumb movie even more absurd. It’s also hard to believe that Joanna would be such a great employee as she is described to be by her boss when she is going out every night having sex with strange men at all hours. I would think at some point she’d become exhausted and her productivity at her day job would be effected. I also thought it was a bit goofy why someone would hire Bobby as a private investigator to begin with when he had no experience in that area.

Annie Potts gives the film’s all-around best performance particularly during a strong scene involving her character in bed with Bobby and her roundabout way of admitting that he no longer satisfies her. Laughlin is okay, but bland and the segment where he dresses up as a giant penis having an erection is downright embarrassing. Perkins is fun as the flamboyantly weird reverend and I got a kick out of his singing as well as his bag full of sex toys, but in the end it’s just a bad rendition of Norman Bates that typecasts him while discrediting his earlier more serious efforts.

The scene where China visits an old man who has only a few months to live is the movie’s one and only interesting moment. Had there been more of a history shown to Joanna’s character and why this seemingly intelligent woman did what she did I might’ve have been able to get into it more instead of being completely bored with it. The sexual imagery was considered quite ‘shocking’ and explicit for 1984 standards, but now comes off as benign and hooky especially since one can find far more graphic stuff simply by casually surfing any one of the thousands of porn sites on the internet today.