Suzy (Jessica Harper) is an American from New York who aspires to be a ballet dancer and travels to Freiburg, Germany to enroll at the dancer academy there. When she arrives she confronts another young lady who shouts something about a ‘blue iris flower’ before running out into the stormy night and then later turning up murdered. As the days progress strange events begin to occur convincing Suzy that the dance school may really be a cover for a coven of witches.

I first saw this film back in the late 80’s and it left me cold, but after reading a few other movie blogs where the critics insisted this was ‘brilliant’ I decided to give it another chance and approached it with a completely open mind only to end up liking it even less. The majority of the problem is Dario Argento’s over-direction. The sets and color schemes are wildly over-the-top bordering on camp. Had he pulled back even a little it might have been visually impressive, but instead gets obnoxious. The atmosphere, like everything else, is overdone creating a dream-like fantasy feel that has no connection to reality and therefore not very compelling.

The music, which was done by a group called Goblin, is interesting to some extent. I like the effect that to me sounded like hissing demons, but the other parts of it too closely resembled the ‘Tubular Bells’ music that was used in The Exorcist. It also gets overplayed and is too loud coming off like a spoiled child demanding your attention, which creates less tension and more distraction instead.

The special effects don’t live up to billing. When a man gets attacked and then eaten by his own dog is the only good part simply because it’s unexpected. Otherwise the blood and gore is average and even lacking. The majority of it is at the beginning where we see a young, frightened woman squirmy around on the floor while she gets stabbed and to a degree looks like some interpretive dance routine. The shot of a body coming out of a ceiling and then hung from a rope doesn’t work because it is clearly a mannequin and if you look real closely her face already has a strangled expression on it before the head goes through the noose. 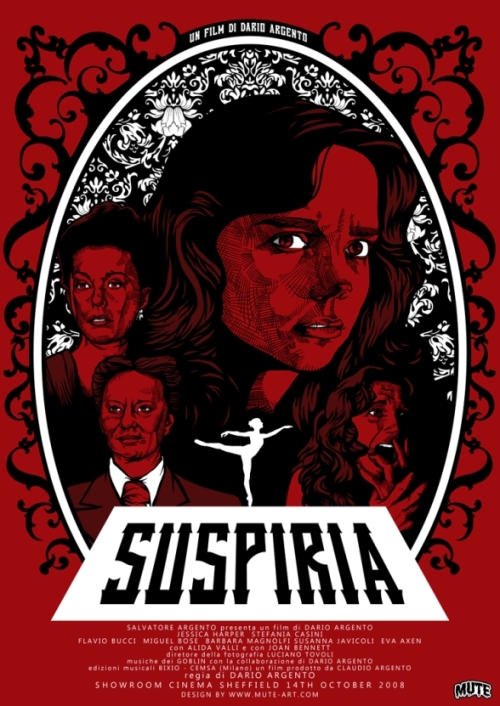 Harper is a good protagonist and its fun seeing classic film star Joan Bennett in her last film role. I also really liked Alida Valli as Miss Tanner the dance instructor. During the 40’s and 50’s she was a stunningly beautiful leading lady, but here looks very witchy with the way her hair is cropped up into a tight bun as well as with her eyes and voice. The rest of the supporting cast have their voices dubbed, something that Italian productions during this period were notorious for and gives the already wooden dialogue a cheesy, amateurish sounding banter.

The climactic finish is a big letdown. For such an extravagant, garish build-up I was expecting much more of a bloody, drawn-out battle. Instead Harper just picks up a sharp object and stabs the head witch, who looks dead already, and it immediately kills her along with the others, but to me this didn’t make sense. This is supposedly some otherworldly demon, so the same laws of physics wouldn’t necessarily apply to her like it does to humans and a simple stab wound wouldn’t have the same effect like it would to regular people.

I was glad to see that other viewers on IMDB particularly those on the message board felt the same way about this ‘classic’ as I did. In my opinion the only way to enjoy it is for its excessive camp value and nothing more.