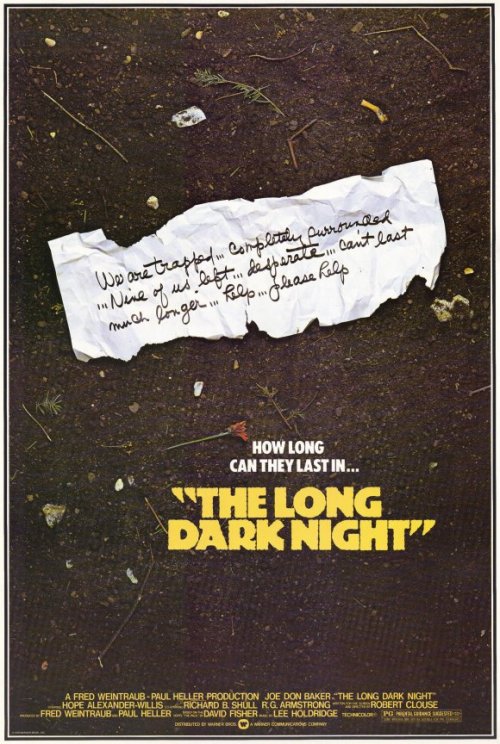 4-Word Review: Dogs on the prowl.

Jerry (Joe Don Baker) moves to idyllic Seal Island with his new wife Millie (Hope Alexander-Willis) and their two sons. They meet vacationers Jim and Marge (Richard O’Brien, Bibi Besch) and their grown son Tommy (Paul Wilson) as well as island locals Hardiman (Richard B. Shull) and Cobb (R. G. Armstrong). As the days progress Jerry becomes aware of wild dogs roaming the island that are led by a particularly vicious mongrel. These dogs become more aggressive as they have already attacked other humans and have now acquired a taste for them. The eclectic bunch becomes trapped in a home surrounded by 15 hungry dogs while forced to use their cunning and wits to outsmart the animals and make it to freedom.

The film has an interesting even novel idea of turning man’s best friend into a villain and is quite similar to Dogs, which came out at the same time and will be reviewed next week. Unfortunately the structure runs along the predictable mechanical formula of a conventional horror film using the same type of scares and shocks that are not all that imaginative.  Although shot on-location in Bodega Bay, California it looks more like a cheap studio back lot that lacks any type of visual flair. In a lot of ways it comes off like a TV-Movie and whenever there is any gore it will cut away and not show it giving it very tame, trite and dated feeling.

The characters are dull and generic and a few more interesting personalities or dramatic side-stories could have helped. The film also takes a very old fashioned viewpoint on women as they are portrayed as being helpless and incapable of handling things on their own and in desperate need of the big, burly man to come in, take control and save the day.

I thought it was amusing that Baker was cast in the lead as his face has always reminded me of a bulldog. I don’t consider him to be all that bad of an actor, but there are other male leads that could have worked better. The female cast members are completely wasted and seem put in only to sit around with a frightened looks while the men do all the action.

The dogs themselves aren’t too bad. The pack leader is made to look like he is demonic, which is a little overdone, but still effective.  A fight scene between two of the dogs is well done and intense. I also liked the climatic finish in which Baker goes face-to-face with the lead animal with only some box springs between them. However, the basic concept seems dubious and these were all pets apparently abandoned by their owners only a few weeks earlier and it seemed hard to believe that they would have turned this wild and aggressive so quickly. Most stray dogs that have been previously socialized by humans can usually be taken back into captivity relatively easily while feral dogs remain frightened of humans, but in either case rarely go on the organized attack like they do here especially when they don’t have rabies and are mostly non-aggressive breeds.

This entry was posted in 70's Movies, Movies Based on Novels, Movies with a rural setting, Thrillers/Suspense and tagged Entertainment, Joe Don Baker, Movies, Review. Bookmark the permalink.