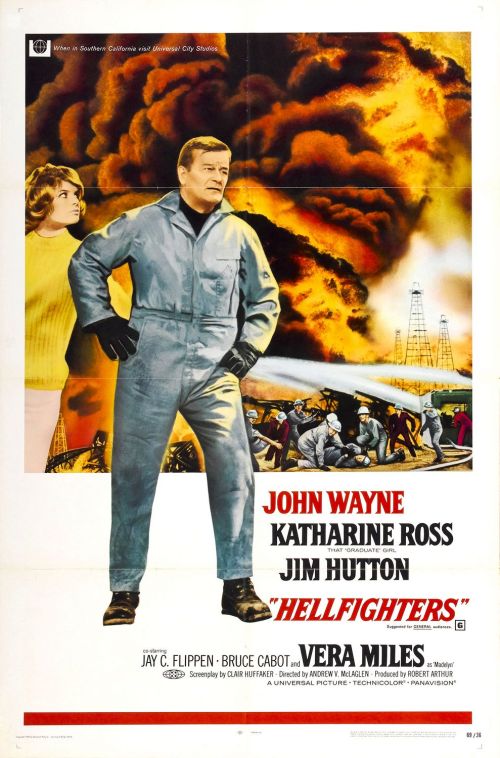 4-Word Review: Put out the fire.

Chance Buckman (John Wayne) runs a company specializing in putting out oil well fires. His loyal assistant is the young and dashing Greg Parker (Jim Hutton) who on his off-hours is known to be quite the ladies’ man. When Chance is injured during a freak accident and sent to the hospital Greg call’s Chance’s estranged daughter Tish (Katherine Ross) to come visit him. When Tish arrives her and Greg fall in love and get married even though there is no initial chemistry and after only knowing each other for five days. The rest of the film deals with Chance and Greg quarreling over having his daughter, or any woman for that matter, on-site watching them put out fires as he feels it’s ‘not the proper place for a woman to be’.

If this were a documentary on the real Red Adair, which is who the Chance Buckman character is modeled after, this would have been an exciting and fascinating film. Unfortunately the drama in-between the fire scenes is lame and hooky. The characters and situations are generic and boring and the 2-hour runtime becomes almost interminable to have to sit through.

Politics aside I have always enjoyed Wayne as an actor. Yes he can basically only play one type of part, but he does it well. He knows how to have an onscreen presence, can usually own every scene he is in and can sometimes surprisingly show a good self-depreciating sense of humor as well. However, here he looks old, tired and washed-up. He goes through his scenes like he is sleepwalking and as bored with the threadbare material as the viewer. The silly barroom fight that he and his pals get into becomes ridiculous when you realize that it is old geezers in their 60’s and 70’s that are throwing the punches. The only good scene he has is during a humorous throwaway where he sits on a committee and much to his annoyed reluctance must decide what color to paint the company’s 1,400 nationwide bathrooms.

Despite the fact that she later told reporters that this film was “The biggest piece of crap I’ve ever done!” it is Ross who is the most engaging and quite beautiful in her bob haircut. I enjoyed the way her character stands up to Wayne and apparently behind the scenes the two did not get along and had quite a few arguments. Vera Miles as Wayne’s wife is badly miscast as she was 23-years younger than him and looks more like Ross’s older sister than her mother.

The opening 20 minutes where you see step-by-step how the men put an actual oil rig fire out is quite compelling and even educational, but it goes completely downhill from there and never recovers. By the end the whole thing becomes redundant and having the climatic finale takes place in South America where the men risk being shot at by guerrilla snipers adds little tension or interest making me conclude that the one thing that should’ve been set on fire was the script, but unfortunately it wasn’t.