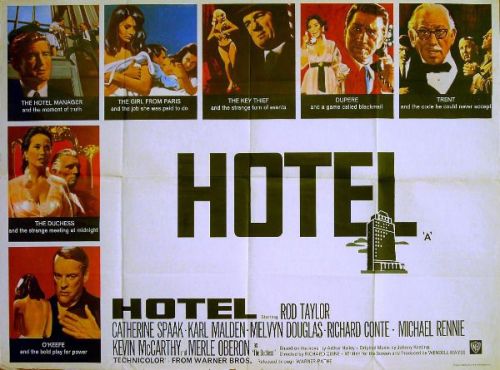 4-Word Review: Drama at the hotel.

Warren Trent (Melvyn Douglas) has been the owner of a large, luxurious New Orleans hotel for years, but finds that his old fashioned business ideas no longer mesh with the modern consumer. The place is losing money and he turns to Peter (Rod Taylor) the hotel manager and loyal employee to help find a suitable buyer.  Curtis O’Keefe (Kevin McCarthy) wants to purchase the place, but his plans call for too many changes that Peter doesn’t like. However, Curtis’s beautiful girlfriend Jeanne (Catherine Spaak) takes an interest in Peter that makes Curtis uneasy. There is also the Duke of Lanbourne (Michael Rennie) staying as a guest with his wife Caroline (Merle Oberon) who inadvertently kills a child during a hit-and-run accident that the two try desperately to cover up. On top of this is Keycase (Karl Malden) a small-time crook who has made copies of all the room keys and uses them to break into the rooms of the guests and steal their money while they sleep.

I loved the locale, but the film fails to capitalize on it. We never see a bird’s eye view of the city despite numerous references to its distinct landmarks and although there are a few outdoor scenes done in its crowded neighborhoods there wasn’t enough of them and the viewer fails to take in the full unique flavor of the region. None of the characters have southern accents or characteristics and in a lot of ways the setting could just as easily have been downtown Manhattan.

I was also disappointed that we never see an actual shot of the building. There are a few exterior shots of the entrance way, but nothing of the building as a whole despite a drawing of one on the movie poster, which then fails to give the viewer a complete sense of the hotel’s presumed immensity. The interior background has the expected gaudiness, but it is rather unimaginative and I actually felt the interior of Peter’s small, loft apartment was more visually creative and interesting.

Johnny Keating’s music score is yet another issue. It is distinctive and melodic at the beginning particularly over the opening credit sequence that features a colorful drawing of the hotel that I liked, but during the second half it becomes too jazzy, loud and obnoxious.

Catherine Spaak with her delicate beauty is a major asset. Not only is she drop-dead gorgeous, but she can act as well. McCarthy gets a good latter career role as the spiritual, but crafty businessman who will stop at almost nothing to get his way. It is also great to see Merle Oberon in her second-to-last film as the perpetually conniving Duchess.

Based on the Arthur Hailey novel it is inevitable to compare this to the classic Grand Hotel, which was far superior. However, the drama is intriguing enough to keep it interesting on a passive level. The scene involving a jammed elevator and the desperate attempts to save the occupants is exciting and well photographed and worth catching simply for that.