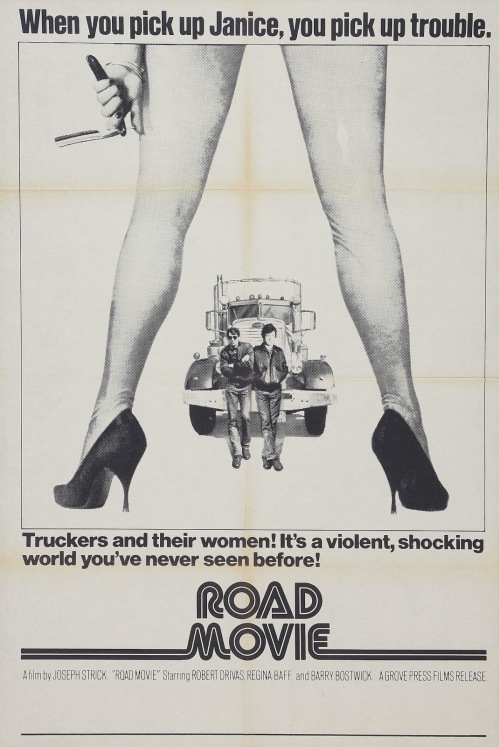 This is a captivating and interesting independent drama filmed on a shoestring budget and loosely based on director Joseph Strick’s own experiences while working one summer as a long haul driver. The story centers on Gil (Robert Drivas) and Hank (Barry Bostwick) a two-man truck driving team that pick up a prostitute named Janice (Regina Baff) who brings out unforeseen tensions and emotions.

The film is compact with characters and situations that are distinct and believable. It also gives the viewer a well-rounded look at the truck driving business and the tough, demanding job that it is.

Baff is convincing as a prostitute who isn’t pretty or educated, but sensible and street smart At times you feel sorry for her, but she proves to be quite a manipulative and shrewd when she has to.

Drivas, as the lead driver, is hardened, caustic, and controlling. He abuses the prostitute the way he feels life has abused him and thinks he can get away with it only to have her constantly outsmart him.

Unlike other road movies the scenery shown along their travels is neither exotic nor beautiful. Instead we are treated to farm fields, factories, and small towns. It’s all the sights and sounds of a working class world as this is really more about the deceptive American dream than anything else. It craftily brings out what an elusive ideal that really is and how no one is ever as independent as they would like to be and ‘moving up’ in the world can be much more difficult than at first perceived.

Strick takes full advantage of his low budget limitations by infusing a type of grittiness that Hollywood rarely touches. The interactions between the characters are interesting and the ending leaves a strong impression. For fans of obscure 70’s movies this one is worth seeking out.