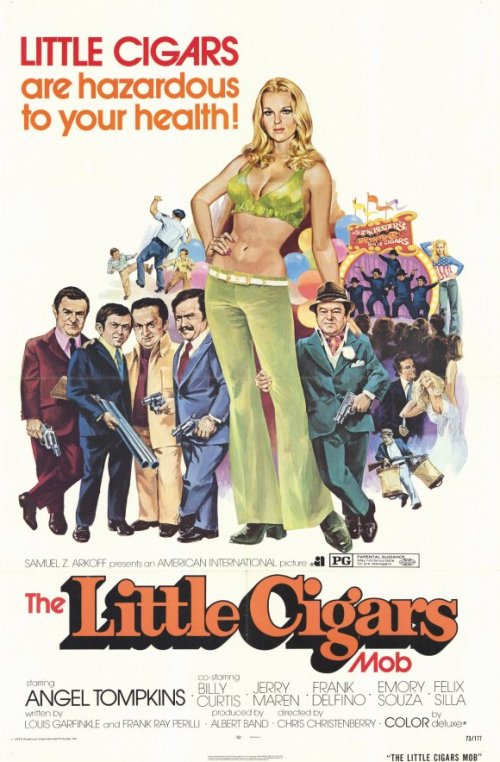 A young, beautiful blonde (Angel Tompkins) becomes an unlikely partner with a group of midgets who run a small (no pun intended) theft ring. With a title and premise like that you would expect a broad comedy, but that is not the case. Although there are a few snappy exchanges and a funny scene involving a police line-up of some very angry midgets, this is mainly handled on a gritty, violent level.

The midgets themselves aren’t too likable. This may be an attempt by the filmmakers to show them as real human beings and the effects of living in a society with a handicap, but they end up coming off as overly irritable, bad tempered, and vicious without ever confirming if this is some social statement.

Overall it’s just a standard crime yarn with midgets used instead of regular sized people. There is even a storyline involving a romance between Tompkins and head midget Billy Curtis showing how love can spring up between any two people no matter what their size. However, you can’t help but get a queasy feeling when you see a 60-year-old midget in bed kissing a young statuesque blonde.

The film leaves the viewer with a certain degree of unpleasantness too much actually, to consider it enjoyable or entertaining. The only part I really liked was the scene where Curtis goes into a tough bar and takes on a big guy who has his arms around ‘his’ girl, which is both amusing and exciting.

Also, Frank Bonner who later went on to play Herb in the classic TV-series ‘WKRP in Cincinnati’ can be seen very briefly as a hotel doorman.