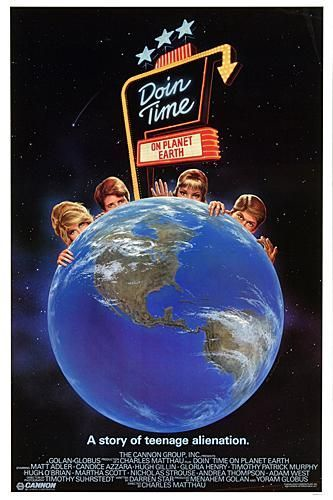 Ryan (Nicholas Strouse) is a teenager who has always been ridiculed as being ‘weird’, but finds that he may actually be an offspring to aliens from another planet. This may be the case with all the other weird people too. He and his fellow ‘weirdos’ must now band together and return to the planet that their forefathers came. Charles and Edna (Adam West and Candice Azzara) are the two that are heading the mission.

This is definitely an original idea that is on the most part handled well. The humor is certainly quirky and on the whole not bad. The problem is the fact that it is treated too lightly like it is nothing more than a harmless joke. A deeper, darker underlying theme might have given it more stature and not made it seem so silly and forgettable. It also places too much emphasis on the kids high school life, which makes it seem at times like just another redundant ‘jock vs. geeks’ thing. There is also has too much of that 80’s look, which gets annoying.

Technically it could have used a bigger budget. The quirky humor gets you through it, but the sets are poor and the special effects tacky. The editing is choppy and the color schemes ugly.

The lead himself is the blandest ‘weird’ person you will ever see. He really doesn’t seem that strange at all. The weirdest trait he has is that he has booby trapped his bedroom so anyone that doesn’t knock gets caught in a net. This seems more like a trait of someone who is immature than weird. He is also way to clean cut. A weird person should have a little more of an eccentric style or look. It also doesn’t help matters that the actor who plays him is quite poor and never went on to play anything else.

The presence of West and Azzara help a lot. Azzara’s outrageous beehive hairdos and fingernails alone make it fun. West seems to act like this is nothing more than some campy walk through, but it is still nice to see him doing something more than just a token appearance. Martha Scott is the real surprise as she really seems to get into being a bitchy, snobby mother-in-law.

If your expectations are moderate and you are just in the mood for something that’s just a little bit different than this might fit the bill. There are a few good chuckles and a higher than usual quotient of movie references.