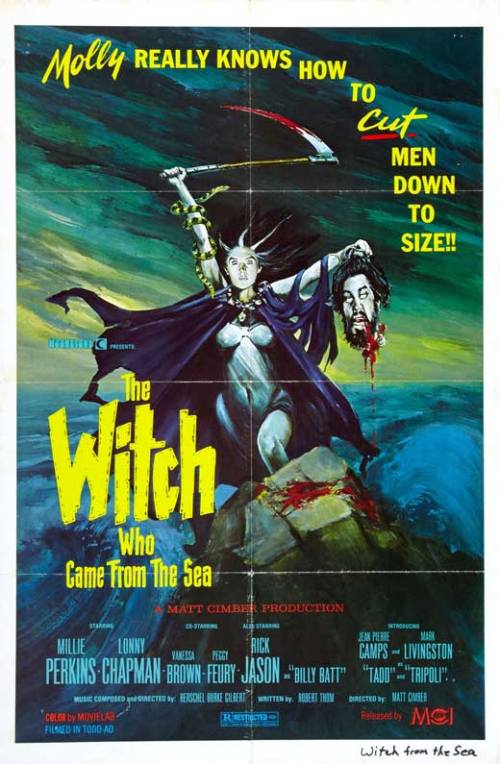 Molly (Millie Perkins) is a middle-aged woman suffering from dormant, haunting memories of sexual abuse that she suffered at the hands of her father. To compensate she goes through periods of black outs where she murders and mutilates men that she picks up and brings home for kinky sex games.

If this movie was half as provocative and artsy as its movie poster this might have been something. Unfortunately it takes a potentially interesting idea and slams it into the ground with a talky script that goes nowhere. Matt Cimber’s direction is unfocused creating a movie that is slow and filled with endless and redundant conversations. It hardly seems like a horror movie at all and more like a drama and a rather stale one at that. The emphasis is more on the psychological workings of the character, but it is too broad and generalized to be interesting, or intriguing. The brightly lighted sets do not create any type of atmosphere and this was one film where I was looking more at the clock waiting for it to be over than at the screen.

The only time there is any action is during the killing sequences, but like everything else this gets botched. For one thing there are endless conversations during these as well. Cimber adds in an echo effect, which initially has a little pizazz, but then gets over-used and monotonous. The victims are stupid and allow themselves to be put into vulnerable positions that the average person wouldn’t so it is hard to relate to them, or care about their gruesome fates. The liquid used for blood is skimpy and resembles chocolate syrup.

It is interesting initially to see Perkins in the title role as she is most famous for playing Anne Frank in the classic 1950’s movie version. She took this part mainly because her then husband Robert Thom wrote the script and she seems game for it. She even does a few nude scenes and looks pretty good in them particularly the scene where she gets a tattoo along her stomach and chest.

The second half deals with the investigation of the murders and the slow realization by Molly’s friends that she may have a dark and dangerous side to her, which is too contrived and offers no suspense or intrigue. The scenes recreating the Molly’s sexual abuse by her father are hooky and it would have been better had it not been done at all and only implied. The worst part though is that Verkina Flowers who plays Molly as a child has brown eyes while Molly’s eyes as an adult are blue.