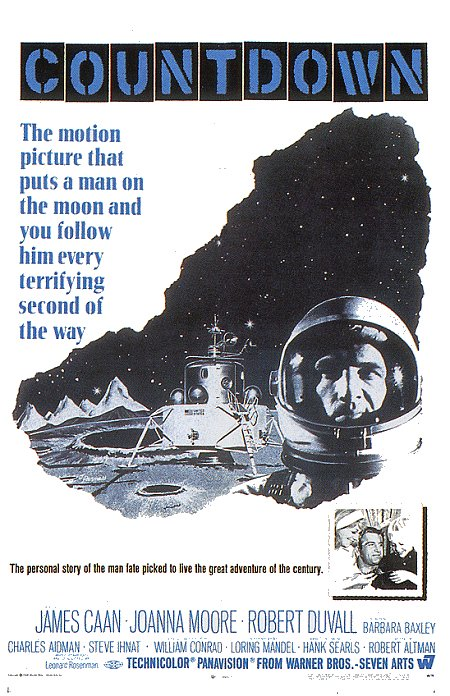 Lee (James Caan) and Chiz (Robert Duvall) are astronauts who are part of the Apollo 3 mission training to land on the moon. The liftoff date is still a year away when it is found that the Russians have already built a rocket ready for takeoff and plan on sending a man to the moon within the next few days. NASA decides to beat the Soviets by sending one of their men in an older style rocket and then having him live there for one year inside a shelter. Lee is chosen to go instead of Chiz much to his consternation and despite the fact that he had more training, but the project proves to be even more difficult than expected and Lee’s inexperience creates concerns that it might not succeed.

This is an unusual space drama in the fact that you see very little action that takes place in outer space or the moon. The main emphasis is on the human point-of-view both with the people directly involved with the project as well as their families and loved ones. The movie focuses on the behind-the-scenes competition and politics and in the process creates a realistic and vivid viewpoint. The story is engrossing and compelling wrapping the viewer in right away and never letting them go. Despite being over 40-years-old it doesn’t seem dated at all and I had to keep reminding myself that I was watching a 60’s movie.

Duvall is a standout as the very emotional and competitive Chiz. I enjoyed seeing the way he initially refuses to help Lee train for the mission when it is found that he was chosen instead of himself, but then reluctantly comes around and becomes both Lee’s mentor and biggest source of support. Caan’s more restrained performance is a nice contrast to Duvall’s volatile one and it is interesting to compare the work the two do here with The Godfather film that they both starred in 5 years later where they played the completely opposite characters.

Joanna Moore is also excellent as Lee’s wife Mickey who goes through a mixed bag of emotions during Lee’s tumultuous training and eventual flight. She’s the first wife of Ryan O’Neal and the mother of Tatum and Griffin who never achieved stardom due to her bouts with alcoholism and guest starred more in TV-shows than movies, but I have always found her to be impressive and unique in everything that I have seen her in. This is also a great chance to see up-and-coming actors in bit roles including Ted Knight, Mike Farrell, and Michael Murphy.

This was director Robert Altman’s first theatrical feature and he does great work here although you will not see any of his trademark ‘Altmanisisms’.  I did see it budding in certain small ways including a party scene that seemed like a real get together with people actually congregating and having lingering background conversations as the camera moves through the crowd versus the conventional way where the main characters stand directly in front of the camera and then only shows stand-ins in the background who are out-of-focus and moving their mouths, but not really saying anything. I also liked that when they are counting down for liftoff it gets paused when a technical issue is found.  This reminded me of the many times when I would watch on television in the 80’s the countdown for the Space Shuttle liftoff and how it would get paused in a similar way sometimes with just a few seconds to go because of certain similar glitches. Most films fail to show this, so it was nice to see it here.