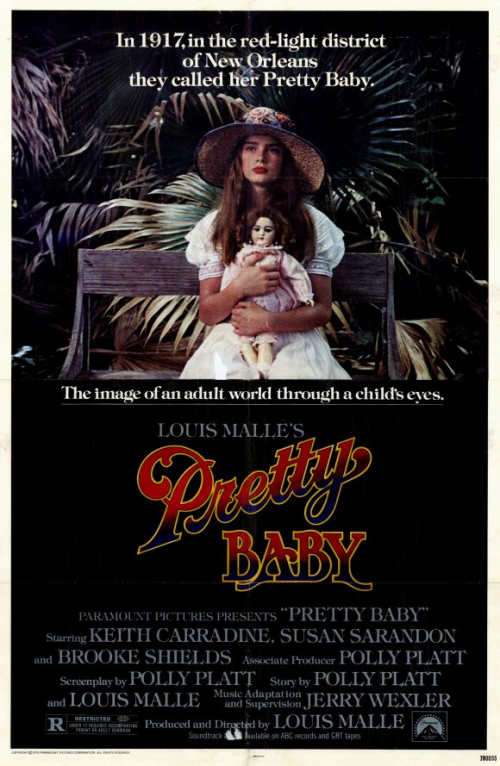 Based on actual accounts of prostitutes living and working in the Storyville area of New Orleans in 1917 the film details the life of Violet (Brooke Shields) the 12 year-old daughter of Hattie (Susan Sarandon) who works as a prostitute and eventually breaks her daughter into the business. Bellocq (Keith Carradine) is a photographer who comes to the brothel to take portraits of the women. He falls in love with the young Violet and the two eventually marry.

Louis Malle’s American film debut is fabulous. He takes a daring subject matter and makes it real and vivid. Sven Nykvist’s cinematography is so detailed that you almost think that you are looking at painted portraits of the era. Malle employs a leisurely European pace to the proceedings, which nicely reflects the slower era. The emphasis is on nuance and in that regard it is brilliant making the viewer feel that they are right there with characters and observing the daily realities around them. The story is certainly shocking, but somehow a strong human element remains making it fascinating and revealing.

The strongest moment comes when a group of middle-aged men bid on Violet to see who will get the honors to take her virginity. Having the camera pan the men’s eager faces, some of whom look to be nearing 50 and even 60 is visually potent as is Violet’s ambivalent expression as she stands on a chair in front of them. The fact that it is approached in a non-sensationalistic matter and instead more like as a slice-of-life makes it all the more disturbing and compelling.

Shields is fabulous. Her facial expressions as she observes the decadence around her is what really makes the movie. She shows a great awareness and creates an intriguing character that cannot read and write and yet acts like having sex with a middle-aged man is ‘no big deal’ and working as a prostitute is completely ‘normal’ way of life. Watching her shift between being very child-like to very jaded is fascinating. I really think this is an actress that is much more talented than she is given credit for and although many other actresses auditioned for the part including Tatum O’Neal, Meg Tilly, Geena Davis, and Diane Lane I really felt the movie wouldn’t have been as effective with them in the role. Shields is really exceptional and should have netted the Oscar, or at least have been nominated.

Sarandon is terrific as her hardened mother and unfortunately is not seen enough, but manages to light up every scene that she is in nonetheless. Singer Frances Faye is also quite good as the head of the brothel. Her old, tired face brings out the difficult, cold lifestyle. Her best moment comes when she is seen staring in a catatonic state into space while everyone else has left the place and all the belongings are being carried out.

Carradine is okay in a restrained performance as a character that is more educated and refined than the rest, which makes for some interesting interactions. The fact that this man ends up getting emotionally stung by such a young girl despite being so much more sophisticated and mature ends up being one of the film’s most definitive moments.