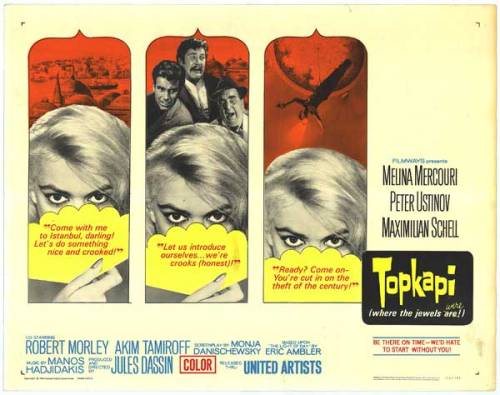 Elizabeth (Melina Mercouri) and Walter (Maximilian Schell) have formed a group of amateur thieves to help them steal an emerald dagger out of the famed Topkapi Palace in Istanbul, Turkey. Problems ensue when one of the original members of the group becomes injured and they are forced to hire on the services of Arthur Simon Simpson (Peter Ustinov) a bungling, portly small-time crook whose on-going ineptitude almost throws their well thought out plans into jeopardy.

This film has become the granddaddy of heist films and rightly so. Based on the novel ‘The Light of Day’ by Eric Ambler the story is well-crafted and nicely detailed. The plan is elaborate, but fortunately believable and plausible. Director Jules Dassin seems to have all the logical loopholes covered. The production design is plush and captivating with just the right amount of offbeat touches to keep it original and cinematic. I found myself enjoying the dry humor and characterizations interspersed in-between the planning and action. The momentum builds evenly without every feeling rushed, or draggy. The on-location shooting is a plus that not only captures the sunny climate, but also the distinct ambience and look of the region.

The climatic sequence involving the actual heist is exciting. The actors do all of their own stunts including Gilles Segal as Guilio being lowered upside down into the palace by a rope being held rigorously by Walter and Arthur and doing most of his maneuvers trapeze style. The whole scene had me holding my breath most of the way and Dassin manages to capture if all from different and interesting angles while allowing the silence to help create the tension.

Ustinov is in fine form and deservedly won the Oscar for best supporting actor. Supposedly the part was originally intended for Peter Sellers, but Ustinov gives the character a lovable quality that I don’t think Sellers could. Ustinov’s rotund physique is an added benefit and his nervous looking facial expressions are consistently amusing with the interrogation scene by Turkish authorities being his best moment. It’s nice to see the character evolve and find a confidence he didn’t think he had while gaining a begrudging respect from the others.

Mercouri sizzles. Normally I am not crazy about women with deep, throaty voices like hers, but she makes it tantalizing. The character is a self-described nymphomaniac and the expression on her face as she watches a group of men spread lotion over their half-naked bodies is worth the price of the film.

The rest of the supporting cast is okay, but I found it odd how very polished they were when Walter insisted that he wanted amateurs for the heist that had no criminal background, or record. Having them behave in a befuddled besides just Arthur would have been more realistic and expected. I also didn’t like that the Guilio never says a single line of dialogue. Apparently the character was a mute, but there is no reason given for it and in the process makes him transparent and boring.

The only real problem I had with the movie is the ending. As Guilio is exiting the palace a little bird flies through the window while he is closing it, which in turn sets off an alarm, which leads to the gang getting arrested. However, I couldn’t understand how the trapped bird would’ve allowed the police to figure out what happened as an exact replica of the dagger that they swipe is put onto the chest of the sultan figure. To me it just seemed like one twist too many and the scenes showing them inside the prison is campy and forced. These guys had been portrayed as being slick and sophisticated most of the way, so why turn them into clowns at the end. Possibly this was done to show that ‘crime doesn’t pay and no crime portrayed in a film should go unpunished’, which was a code most movies were forced to work under in the past. Either way it doesn’t work and kind of hurts what is otherwise a snappy piece of entertainment.