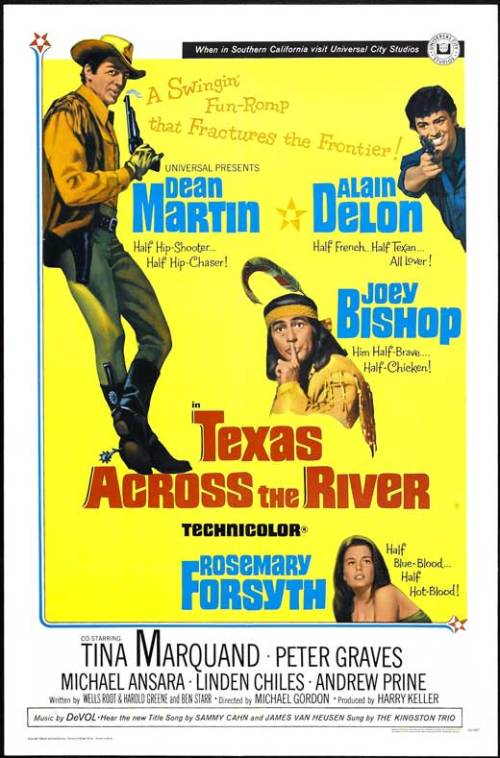 This is a silly western spoof that borders on the inane and is just an excuse to give Martin another vehicle this time in a western setting. The story deals with the wedding between Don Andrea (Alain Delon) and Phoebe (Rosemary Forsyth) being stopped by the arrival of the U.S. Calvary headed by Captain Stimpson (Peter Graves). When they charge Don with murder he escapes to Texas and Phoebe tries to follow him later on. There she meets Sam Hollis (Dean Martin) and his Indian sidekick Kronk (Joey Bishop). Sam becomes smitten with Phoebe and when he later meets up with Don the two become instant rivals while reluctantly working together to allude the Calvary, which arrives in Texas to celebrate its statehood.

In many ways the production takes on Martin’s persona as everything is half-hearted. The humor and scenarios are quite standard. There are a few chuckles here and there, but more misses than hits. It’s so obvious when the actors are standing in front of a blue screen or using a stunt double that it almost looks like an amateur college production. The biggest insult though is that it is all about Texas and yet wasn’t even filmed there. It was done in San Diego and it shows. This is almost like deceptive advertising and for punishment the producers should be forced to spend a summer in the REAL Texas without any air conditioning.

Delon’s presence is good simply because he is French and he gives it a unique flavor, but the film doesn’t portray him as such and instead tries to pull off that he is SPANISH!! He also gets to be too much of a brawny do-gooder and in the end he becomes like Dudly-Do-Right with a French accent.

Bishop is funny simply because he is playing himself. The credits may say he is playing an Indian, but really it’s just Joey in a silly Indian get up. His headband alone looks like it was taken from somebody’s unwanted tie collection. In fact the overall portrayal of the Indians is badly stereotyped and if the film was better known it might merit protesting.

Forsyth gives the film’s best performance. However, having Martin pursue her looks off-kilter since he was old enough to be her father and her and Delon made a better couple. Of course since this is Martin’s vehicle he ends up with her no matter how forced or unnatural it looks.

If you are really easy to please or just a Dean Martin fanatic then you might find this film more passable. The cheek slapping showdown between Martin and Delon is cute and the running joke involving that ‘Texas Tea’ isn’t bad either.

Look carefully for Richard Farnsworth is his first major role as he is almost unrecognizable as the Medicine man.