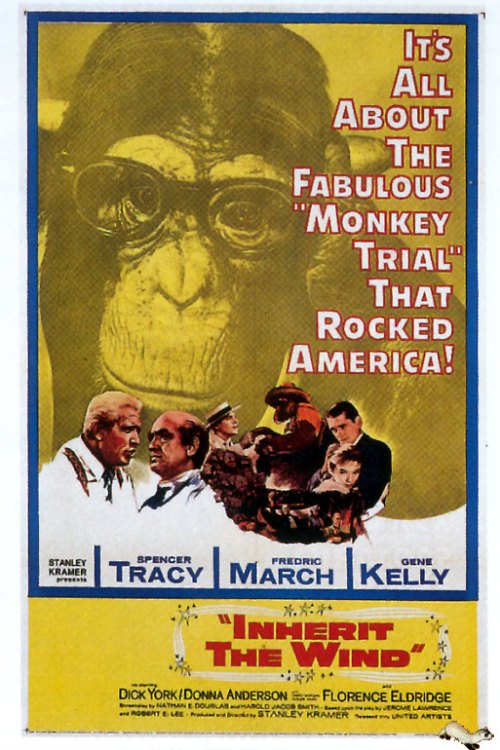 Bertam Cates (Dick York) is a  young school teacher who is put on trial for the teaching the Darwin theory of evolution in the film version of the hit stage play, which in turn was a variation of the famous trial of 1925.

Although labeled a ‘classic’ this film seems awfully stilted and heavy-handed. Everything gets overplayed with too much emphasis on high drama, which in certain instances becomes unintentionally funny. Director Stanley Kramer shows his bias from the beginning and doesn’t allow the viewer to come to their own realization on the issue. The townspeople are the embodiment of every small town cliché you can think of. The buildings that make up the town appear quite obviously to have been built on some studio back-lot. The same goes for the stagy indoor sets as well. Location shooting really helps even if it does go over budget. Just look at this film and then watch Joshua Logan’s Picnic and then decide which one gives you the stronger more lasting impression of small towns.

Fredric March is an accomplished actor, but goes over the top with his performance as the fundamentalist prosecutor Matthew Brady. He plays the character like he is a comical buffoon and uses too many exaggerated gestures and facial tics. Having the character go through a meltdown at the end is almost anticlimactic since he seemed destined for it from the very beginning. George C Scott, who played the same role in the Showtime remake, is much better.

Spencer Tracy as the defense attorney Henry Drummond is great and becomes the film’s main virtue. He is such a master of his craft that he is a joy to watch. He makes it seem all so effortless and natural and yet fascinating at the same time and the character he creates is quite memorable.

The courtroom showdown does allow for some fireworks and the final segment between Gene Kelly and Tracy proves interesting and introspective. The film does have some strong moments, but as a whole it seems kind of clunky.