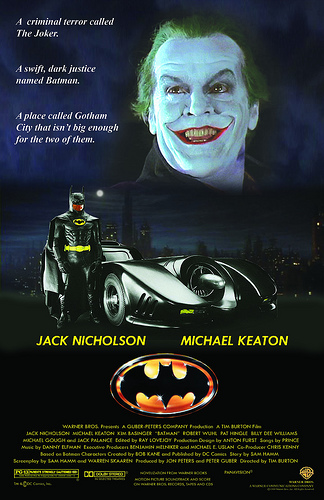 4-Word Review: Where is Adam West?

The attempt at moving the Batman theme from the campiness of the TV series to a darker edge proves successful. Director Tim Burton’s vision of Gotham is terrific. It has a sort of weird mixture of the 1940’s and the modern day and the look is original. It is so gray and dark it seems almost like purgatory and having the citizens celebrate its 200th anniversary may be the best joke of the film.

The story nicely starts out showing how Bruce Wayne (Michael Keaton) became acclimated with this Batman character and how initially he wasn’t perceived as being a good guy. It also explains how as a little boy he witnessed his parent’s murder. Yet it doesn’t go far enough and questions still abound. Like who built the Batmobile and that very immense bat cave? Are we to believe that Bruce Wayne and his kindly butler Alfred (Michael Gough) did it all by themselves?! It would have also have been nice if they had shown what specifically inspired him to take the identity of the bat. Still it’s good that some actual bats are shown and in a brief frame even come flying right at you!

The story is slick, but nothing spectacular. Such a big budgeted and much hyped movie almost cries for a more expansive storyline. Something along the lines of a James Bond plot with some megalomaniac aspiring for world domination or destruction. Having the Joker (Jack Nicholson) simply kill people with his toxic make up seems both silly and tacky. The climatic finale in the bell tower borrows too many elements from other showdowns and is too rehearsed.

Keaton looks uncomfortable in the lead. He shows no energy or charisma and is absolutely stiff in his Batman costume. Nicholson has a little more spunk and in a way seems to be a perfect fit. Yet Cesar Romero from the TV series had a much better laugh and Nicholson’s laugh seems forced. Kim Basinger makes a nice addition as the love/sex interest. She creates a nice balance between the two adversaries. It is interesting to note though that while everyone else refuses to wear make-up (including the newscasters) because of the Jokers toxins she is still seen with plenty of it on.

Overall this is a nice attempt at keeping the theme more true to its comic book origins. It doesn’t come together completely though and is in desperate need of a more singular voice. The second feature in this series Batman Returns is far better.

Watch for Lee Wallace as the mayor of Gotham as he looks like an absolute shoe-in for former New York Mayor Ed Koch especially from a distance. Also William Hootkins has absolutely the best voice for any big city policeman character.