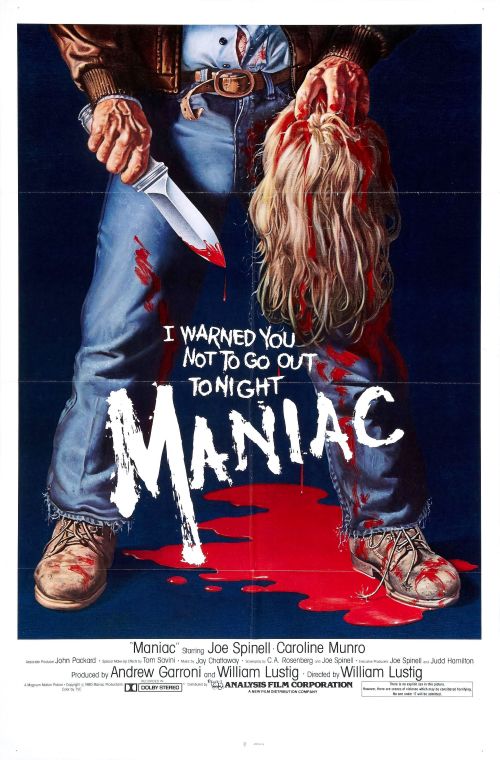 4-Word Review: He wants their hair.

A loner (Joe Spinell) terrorizes New York City by killing young women and scalping them. He then takes their hair, brings it home, and places it (actually he nails it) onto the heads of some mannequins that he has.

In a lot of ways this is the same old mechanical slasher flick as it has all the predictable characteristics of the others that dominated the early 80’s. The story is simple and strung along by long, drawn-out murder sequences. There is some suspense, but it is minimal since we know exactly what is going to happen. The victims are young, good looking women, who are clueless to the dangers that are lurking until it is too late. One segment in particular features a nurse getting off of work late at night, who mentions her fear of the killer and yet for some reason she still foolishly refuses a ride home from her friend and instead walks down a dark, lonely street and into, of course, eventual carnage.

There are also some rather glaring technical errors. One features a woman (the same one who refused a ride) running from the killer by going into an empty subway. Although isolation is the whole factor here there is one shot, taken from inside a departing subway car that clearly shows a whole bunch of people standing just across from her on the other side of the tracks. There is also a segment where Spinell takes his girlfriend to his mother’s grave. When the car pulls up to the cemetery it is a nice, bright afternoon, but when they reach the actual grave it has become pitch black with a strange unexplained fog that has rolled in. Lastly there is the ending. This is a man that has terrorized a whole city and yet only two policemen in an unmarked squad car come to his residence and when they do they don’t even bother to secure the site.

Despite the low-budget problems there are a few things that raise this slightly above the rest. One is the fact that it actually manages to get inside the killer’s head. You hear the inner conversations between his ‘good’ side and his ‘bad’ side. Of course this only touches the surface of a true schizoid personality, but it does offer a little more depth than most. It also helps create a good portrait of a tormented soul and you end up feeling more sadness than fear for the man. The film also consistently has a dark, grainy look, which helps accentuate the ugly theme. Having it take place in New York City gives it a little more distinction and atmosphere.

The special effects are good. The part where he blows a man’s head off, through a car windshield, looks very realistic and has become the film’s most famous scene. The surreal ending, where the mannequins all come to life and exact a sort of revenge, is also well-handled and imaginative. Makeup artist Tom Savini, who also appears as the character of ‘Disco Boy’, has had a lot of success, but the stuff here may be his best.

Director William Lustig shows some panache and Spinell, who also co-wrote the screenplay, gives a surprisingly strong performance, but their attempts at creating a better understanding of a crazed killer prove placid and simply done for shock value.