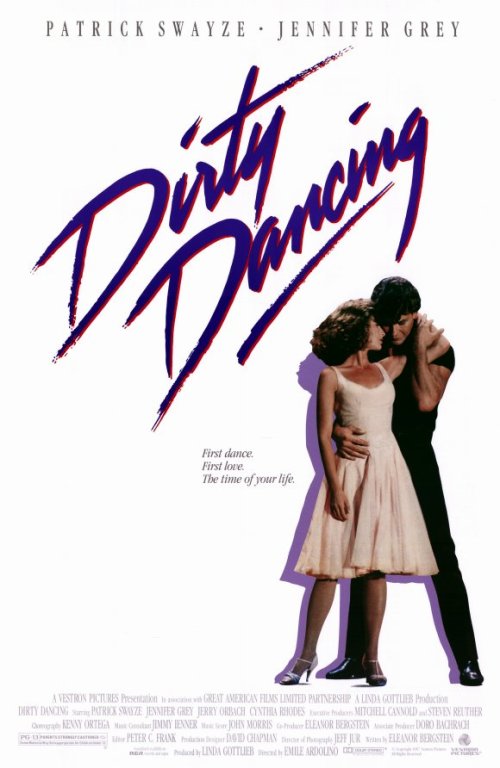 Some of my lady friends at the office were surprised to hear that I had never seen this film and suggested that I watch and review it for my next column.  Since Hollywood is now planning on remaking this movie and several websites have already started up protesting it as fans of the original feel this can’t be duplicated, now more than ever seems to be a good time to give this movie a look.

The plot, which is paper thin, deals with a seventeen year old girl named Frances ‘Baby’ Houseman, who while vacationing with her family at a resort in the Catskills Mountains of New York in the early 60’s, becomes involved with the craze of dirty dancing that is done behind the scenes by some of the young people. When one of the lead female dancers named Penny Johnson (Cynthia Rhodes) gets pregnant and has to bow out in order to get an abortion, Francis agrees to take her place in the dance routine. She has no experience with the dancing, but after spending long hours practicing with the male hunk Johnny Castle (Patrick Swayze) she gets pretty good at it and the two fall in love in the process.

The story is loosely based on the real-life experiences of screenwriter Eleanor Bergstein, who traveled to the Catskills during the summers of her youth with her family and got involved with some of the dirty dancing contests that they had up there. The name of Frances that is given to the character was actually the name of her older sister and the nickname of ‘Baby’ was what Eleanor was called in her teen years.

The first thing that impressed me about the film was the on-location shooting. I had also been to upstate New York during the summers in my younger years and felt that the area was quite scenic. The film does a good job in recreating this to the extent that it also becomes like a third character. The only problem was the fact that it was actually filmed in North Carolina and Virginia, but they disguise it well and the ambience of the Catskills is still there.

The chemistry between the two stars is what makes the movie and spiraled it into the hit that it became. I felt the energy and I liked it despite the fact that apparently behind the scenes the stars did not always get along. I thought the casting of Grey, daughter of legendary entertainer Joel Grey, was overall a good choice. The producers wanted someone who could really dance and she fit the bill even though she was actually ten years older than the character she was portraying. However, I did feel it became somewhat of a problem during some of her exchanges with the Johnny character who was supposedly in his twenties. I would have thought that a young lady of only seventeen would have been a little more intimidated dealing with an older man and even a little awkward at times and yet their ‘spats’ came off more like two adults arguing.

I really liked Frances’ relationship with her father Jake (Jerry Orbach). It was a nice and respectful one with neither side talking down to the other. The scene where the two have a falling out and Francis comes to him to ask forgiveness is actually quite emotional. However, the part where Jake, who is also a Dr., helps Penny when she becomes ill after having an abortion with an untrained physician seems a bit glossy. Normally that situation would prove fatal to the woman, but somehow Jake is able to make her ‘all better again’ simply by using medicines inside his doctor bag and she wasn’t even forced to go to the hospital. I also thought that the fact that Frances kept her dancing a secret from her parents seemed to be a bit of a stretch as she spent so many hours with Johnny that I would have thought they would become suspicious as to where she was all that time.

For the most part the recreation of the 60’s era is all right. However, I did not like instituting 80’s songs into the mix. ‘Hungry Eyes’ and ‘She’s like the Wind’ are good songs on their own, but have a distinctly different sound than music from the 60’s. By putting them into the soundtrack they become jarring and, for this viewer at least, threw me out of the time period of the story completely. To me it was a sign of poor filmmaking.

The movie is formulaic and predictable to the extreme, which was the reason that I never went to see it when it first came out because basically if you’ve ‘seen the previews then you’ve seen the movie’. It is always nice if a movie can give you some sort of unexpected twist, or surprise, or even some new level of insight, but this film offers none. Even on a soap opera level the scenarios and complications are awfully light and there are a few moments of hackneyed drama. If one’s only demand is to see a predictable teen romance then on that level it is competently done. If a viewer were to demand anything more than that then they will most assuredly be disappointed.