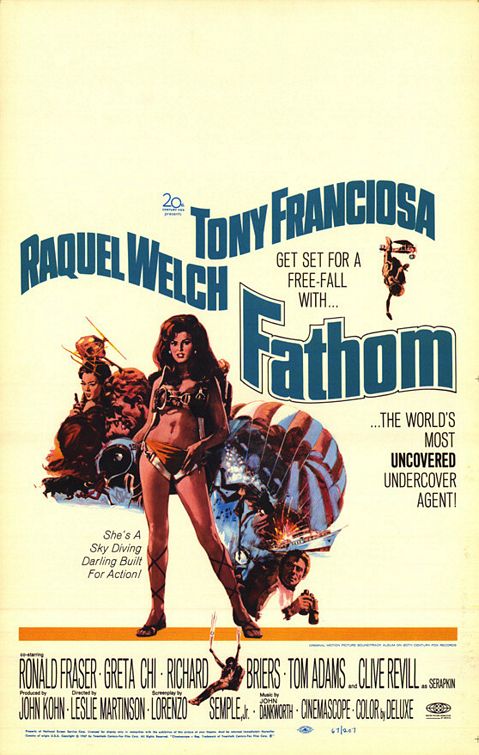 The spy genre became a big craze in the late 60’s with the success of the James Bond films.  Studios were busily either coming out with imitations of the genre, like the Matt Helm films with Dean Martin, or spoofs of the genre.  This film, starring the voluptuous Raquel Welch, is a combination of both.

The premise is slightly unique as the Welch character, whose name is the same as the film’s title, is not actually a spy. She is a dental assistant and part-time parachutist. This attracts the attention of the British secret service who want to use her parachuting skills to have her ‘drop-in’ to the island mansion of bad guy Tony Franciosa and plant a bug on his premises. They need this done so that they can monitor his conversations and find the whereabouts of a priceless Chinese dragon statue that they are after.

Initially I was intrigued with the idea of the Welch character being just a regular person who gets trained to be a spy from the ground up. However, this concept almost immediately falls flat and ends up pretty much ruining the whole film.  One of the problems is that the Welch character goes through no training to speak of and agrees to this potentially dangerous mission that comes out of nowhere without any conversation regarding her compensation.  She also ends up thinking way too quickly on her feet and behaving like a seasoned spy without any of the expected awkwardness. The character is also poorly fleshed out having no personal life, relationships, history, or even a few odd little quirks.  There are constant references to her beauty, but this quickly become tiresome.  Raquel’s typically one-dimensional performance doesn’t help.

The storyline becomes too convoluted and suffers from having too many plot twists. Reportedly even the cast members found the story confusing.  The good guys become the bad guys and then become good guys again with boring regularity.  A decent spy film needs one true bad guy who is evil and nefarious and seemingly unstoppable because that is what builds the tension.  This film has no tension whatsoever and the musical score sounds like Herb Alpert or Sergio Mendes, which would be better suited for a romance.

The one thing that did impress me was the stunt work.  There are a few that look genuinely dangerous and are shot and edited very well.  One involves Raquel trapped in a bull ring while wearing a red dress.  There is no question that it is a real bull and several shots have her stumbling to the ground while the bull stands right over her. The editing is so well done that I could not tell when the stuntwoman was put in, as usually I can spot this.  Even if a stunt person was used it still looked quite dangerous and very real.  Another good one features Raquel swimming away from a bad guy who continues to shot at her with a spear gun. Both the underwater and aerial photography in this segment are outstanding.

Alas, none of this is good enough to save the film as a whole.  The tongue-in-cheek humor and pacing is poor, and the film ends up being boring and contrived.