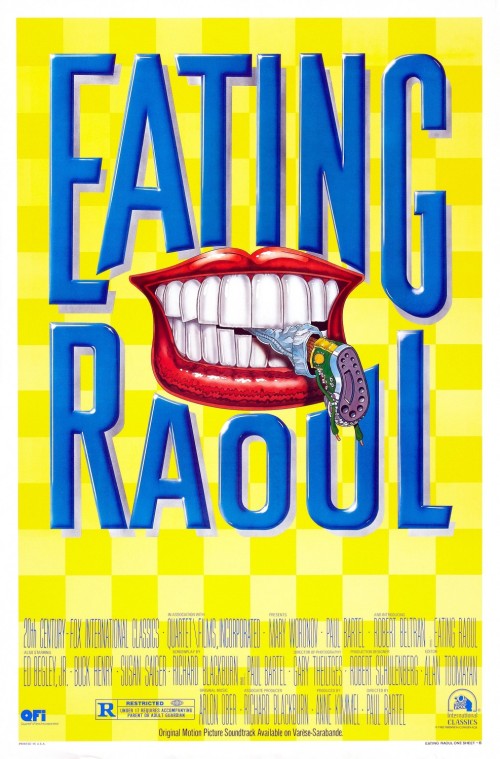 4-Word Review: Get rid of perverts.

Paul and Mary Bland (Paul Bartel, Mary Woronov) are a very conservative couple that do not approve of open sexuality. They live in an apartment that is filled with swingers and spend most of the time trying to avoid them while abhorring their behavior.  Their dream is to purchase a large house in the countryside and convert it into a restaurant.  The problem is they have bad credit and are unable to secure any type of loan, so they decide to run an ad in the newspaper promising to fulfill and play-out people’s sexual fantasies. They insist everyone must pay in cash and then lure them to their apartment where Paul hits them over the head with a frying pan and kills them. That way they are able to collect the money they need while ridding the world of all the ‘perverts’.  However, a local con-man by the name of Raoul finds out about their act.  He is a young, good looking, self-described ‘hot-blooded Chicano’ who has the hots for Mary.  He allows them to continue with their scheme as long as he can have the dead bodies afterwards, which he then sells to a company who uses them to make dog food. Things go well for a while, but then complications ensue and that’s when it really starts to get crazy.

Paul Bartel’s hilarious script was initially rejected by all the studios and he spent six futile years trying to get it financed. It was only after his parent’s sold their house and gave him the money that he was able to get the film produced. It definitely has a very low budget look with a grainy film stock that gives it almost a home movie feel. However, this is a perfect example where a creative script can help overcome the film’s other shortcomings.  There are some genuinely funny moments the best is probably the swinger’s party and the infamous hot tub scene. This is the one thing that I remember most vividly about the film when I first saw it decades ago. I knew it was coming and still found myself laughing out loud when it did.  The swingers themselves are an obnoxious riot and you actually find yourself looking forward to seeing them get killed.

Writer, director, and star Bartel continues with his theme that perversion is a normal part of the human makeup.  Everyone has their own private sexual fetishes and fantasies that is unique only to them and may not be understood by others. He started this philosophy with his short film Naughty Nurse in 1969 where an otherwise respectable doctor and nurse would spend their lunch hour playing weird sex games. He continued it with his initial feature film Private Parts in 1972 that had a handsome young man who enjoyed having sex with a doll that he could fill up with water over real women and the weird relationship that transpired with the teen girl who lived next door and got-off watching him do it.  Here it continues with the sexual fantasies of Paul and Mary’s customers that become increasingly more outrageous (and hilarious) as they go on. Even the very strait-laced Paul and Mary have their own perversions. They dislike the actual act of sex and never do it. Instead they sleep in separate beds and cuddle with stuffed animals instead of each other, which is just as funny in the other way.

When I initially saw the film I thought Bartel was having a major ego trip by casting himself as being married to a very attractive lady like Woronov. He was a pudgy and bald man who in real-life would most likely not be able to attain such a woman. Upon second viewing I ended up liking the odd casting and felt it helped make the film stronger.  Usually beautiful women are shown as simmering with sexuality and even sex symbols, so I appreciated the way it went against type. It also helped to define how Paul and Mary had a very special understanding with each other that did not conform to conventional wisdom, which sometimes happens. I also enjoyed the way Mary stays true to Paul even when she ends up being severely tested.

I admired Woronov’s performance the second time around as well. She was majoring in sculpting in 1963 at Cambridge University when her class decided to take a field to the Andy Warhol factory. She became so impressed with the place that she stayed while the rest of the students went back.  She starred in some of his experimental films and now 80 independent/underground films later she has become a major cult icon.  I was only 18 when I first viewed this and at the time my hormones where more fixated on her sleek body as she does have a few good, but brief nude scenes. Her acting though indeed helps carry the film.

Successful Latino actor Robert Beltran is good in his part as Raoul, which also marked his film debut. I enjoyed the contrast of his aggressive, streetwise character against the stifled Blands. There is also shades from Roman Polanski’s classic Cul-de-sac where a coarse stranger disrupts the unique chemistry of an otherwise isolated couple.

Famous character actors pop-up in amusing cameos. Ed Begley Jr. is an over-the-top hippie sex freak. Edie Mclurg appears near the end of the film as one of the swingers. Famous dwarf actor Billy Curtis is one of the customers and has a pet Doberman that is bigger than he is! The best cameo goes to Buck Henry who plays an amorous bank manager who makes advances towards Mary and then the funny way he tries to back-track when he gets caught.

This film has acquired a major cult-following that seems to grow by the year.  Yes, there are some flaws. The beginning is a bit cheesy and awkward and it took me about 20 minutes before I could get into it. I also wondered, with so many people being killed, why the suspicions of the police, or anyone else, was never aroused. There is also the fact that not everyone would get killed by being hit over the head with a frying pan, some might just get knocked unconscious. Still, I found myself laughing at a lot of places. I think people who are fans of black humor will enjoy this especially since it doesn’t sell itself out and stays true to form the whole way.

Sadly Paul Bartel died in 2000 from cancer and I felt his full potential was never fully realized. This became is most popular work and although he did several films afterward, none of them were as good.  Mary Woronov continues to be quite busy even at the age of 68. A documentary about her life and career is set to be released later this year and I look forward to seeing it.