4-Word Review: Ending is a kicker.

Jeannie (Carol Kane) is a shy 16-year-old girl living in a small, bleak Canadian town just after the war who is raped by her older brother’s army buddy. Her parents (Donald Pleasance, Doris Petrie) respond as if it is her fault and resort to some extreme even shocking measures in order to ‘save the family honor’.

This is a solid little drama with good scene construction. The pacing is deliberate and an ending that really packs a wallop. The sets and location look authentic for the period and the characters are believable. Jeannie’s friend Sara (Christine Thomas) seems like a very typical teenager no matter what time period and her interactions with Jeannie show the realities of teenage friendships and makes for an interesting sidelight from the main story.

Kane is impressive acting in a style I’ve never seen from her before. Pleasance is solid as usual and his Canadian accent sounds almost authentic, but it is a bit overdone. Petrie is also quite good as the mother. She really brings to surface a character that is so cloistered she is unable to make any clear decision for herself.

The story itself is the real strong point. It is convincing, insightful, and well-crafted and brings out a sort of darkness and ‘evil’ that can come from ‘wholesome small towns’ and ‘God fearing people’. It shows how having a rigid morality can sometimes create a sort of immorality and also brings to light the lies people wish to live by and how at times it can cloud their better judgment, but most of all it’s a study at  how easily sensitive, fragile people can get sucked away and how sadly common it is.

This is a film designed to leave you feeling shocked, angered, saddened, and maybe even a little repulsed. This is quality viewing that deserves more attention.

4-Word Review: She can defend herself.

This Canadian thriller, which is loosely based on actual events deals with a rich playboy named Harry (Chuck Shamata) who invites Diane (Brenda Vaccaro) who is also a model to spend the weekend with him at his isolated lakeside cabin that is miles from anywhere. On their way there they run into a biker gang whose leader (played by Don Stroud) takes an intense disliking to Harry. The gang tracks the two down at their cabin where they proceed to terrorize them before eventually killing Harry and forcing Diane to defend herself alone, which she does valiantly.

In a way this is a poor man’s version of I Spit on Your Grave or Straw Dogs, but not nearly as effective. For one the violent scenes aren’t very intense. This is due mainly to the fact that writer/director William Fruet keeps the camera too removed from the action and never once uses a hand held. There is also no gore as Fruet always cuts away just before anything happens and what little you do see looks tacky. Of course a film doesn’t have to be gory to be scary or intense, but if it is going to have this type of violent theme then it should at least equal it in style. The tension also ebbs and flows and the four hoodlums are too dumb and seem like cardboard cutout caricatures that possess no human qualities whatsoever.
The Harry character does allow for some added dimension, which helps and hurts. I liked the way he sees himself as this ‘refined’ gentlemen and yet views women in the same Neanderthal way as the thugs. He brags of having money and power, but when that gets stripped away from him he becomes amazingly spineless. This makes for a good commentary of the rich and successful, but unfortunately also turns him into being too much of a jerk and when the bad guys proceed to tear his place apart we are not ‘horrified’ at all, but instead enjoy seeing it.

There are actually a few good elements one of which is the music score, which effectively creates an ominous feeling. It was also filmed in Ontario Canada during the autumn and the desolate, bleak landscape helps match the bleakness of the situation and characters. I also loved the morning mist captured during the final chase sequence that gives things a very eerie look. There is also a well-staged car chase at the beginning that was done at high speeds and features some great stunt driving.

The film is saved somewhat by Vaccaro’s interesting performance as a victim. She is independent and self-sufficient and refuses to allow herself to be seen or used as a sex object. This goes along with the film’s overall theme which seems to run on the emergence of the woman in a man’s world and the basic redefining of the female role in society. Yet I felt it would have worked better had the character harbored the old female traits at the beginning and then had these new traits come out as the film progressed. 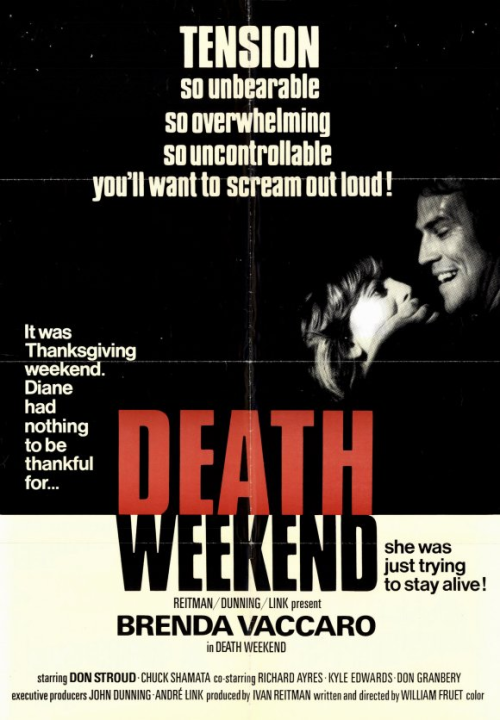 Alternate Title: House by the Lake