During the depression a young artist named Tod Hackett (William Atherton) comes to Hollywood to help design the set for a new movie. While there he meets a wide assortment of people, who seek fame and fortune, but find heartbreak and rejection instead. Tod falls for Faye (Karen Black) a woman striving to become the next big Hollywood starlet despite lacking any talent while her father Harry (Burgess Meredith) is on the opposite end of the spectrum. At one time he was a vaudeville comedian, but now with his failing health is relegated to selling health tonics door-to-door.

This film is the last great effort of director John Schlesinger whose films after this lacked the same visual style that made Midnight Cowboy and Far From the Madding Crowd cinematic masterpieces. From a visual standpoint it hits all the right chords and is filled with many memorable segments. The best ones include the scene where a group of bourgeoisie guests who come to Natalie Schafer’s home (she was best known for playing Mrs. Howell on ‘Gilligan’s Island’) to watch porn movies There’s also the scene where an entire film set comes crashing down and injuring the entire crew as well as the climactic moment where a large crowd waiting outside to see the premiere of The Buccaneer turn into a violent, bloodthirsty mob.

The acting is first-rate particularly Black who portrays her desperate character to a perfect tee. Meredith, who was nominated for a supporting Oscar, gives a vivid portrayal of her equally desperate father making his scenes quite entertaining. Donald Sutherland is also solid as a likable, but socially awkward outsider, which best suits his acting persona.

The script though by Waldo Salt, which is based on the 1939 novel of the same name by Nathanael West, misses out on a lot of the book’s subtext. In the movie Tod tries to rape Faye while at a party, but this eruption of his seems to come out of nowhere while in the book it gets better explained by showing how Tod continually harbors rape fantasies for Faye and makes these fantasies a running part of the story.

Donald Sutherland’s character, the aptly named Homer Simpson, which supposedly was the inspiration for Matt Groenig’s character in his famous comic strip, is a confusing enigma. In the book he is given a better backstory and revealed to be a man struggling with a lot of inner turmoil while here he’s seems more like a strange, naïve mope from another planet.

There’s also no explanation in the movie for why the word Locust is in the title, which is in reference to the Bible and the plague of locusts that descended onto the fields of Egypt. Tod symbolizes the locust in the novel’s version of the story while in the movie his character is more of an outsider observing the ugliness, but not having a hand at creating it

The biggest issue though is the film’s underperformance at the box office, which helped relegate both Black and Atherton, who at the time were considered up-and-coming stars, to supporting roles afterwards. I believe part of the reason for this is because none of the characters are likable. It’s fine showing humanity’s bad side as long as the audience doesn’t feel beaten-over-the-head with it, but the film wallows so much in the darkness that it overwhelms the viewer. Having a character that was slightly removed from the madness and not as flawed might’ve helped to balance things and make everything else that goes on more tolerable.

Overall though it’s a great film, but the statement it’s trying to make remains murky. Better efforts should’ve been made to tie it to the disillusionment of the American Dream, which is what the book does and not seemed so much like just a glimpse into a freak show of a bygone era like it ends up doing here.

Posted in 70's Movies, Drama, Moody/Stylish, Movies Based on Novels, Movies with Nudity 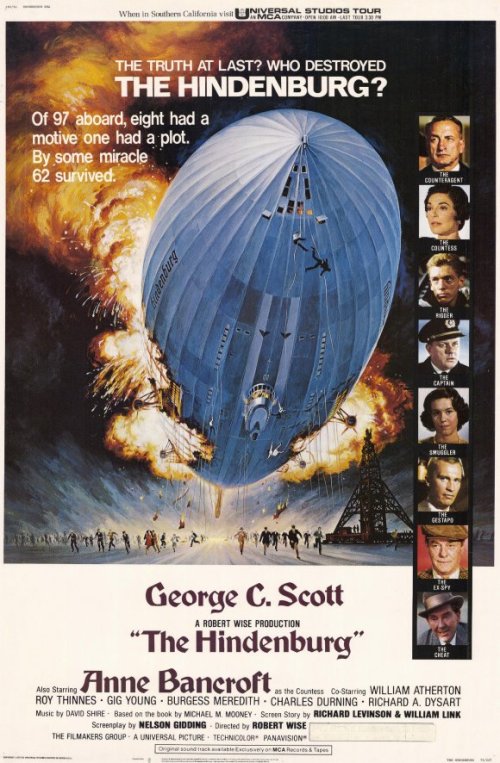 4-Word Review: Blow up the zeppelin.

Based on the 1972 novel by Michael M. Mooney the story centers on Colonel Franz Ritter (George C. Scott) who was a part of Luftwaffe, which was the aerial warfare branch of the Nazi government and was employed to protect the Hindenburg zeppelin on its voyage across the Atlantic. Rumors had swirled that hostilities towards the Nazi party could cause a terrorist attack on anything connected to them and since the airship is German made it made it a prime target. Martin Vogel (Roy Thinnes) assists Ritter in his investigation, but the two find themselves at constant odds as they must sort through a wide array of suspicious passengers all of whom have the motivation and ability to cause harm to them and everyone else.

The film of course is based on the actual explosion of The Hindenburg zeppelin that occurred on May 6, 1937 in Lakehurst, New Jersey. Although there had been bomb threats made against The Hindenburg before its flight and the theory was investigated there has never been any hard proof that is what caused its destruction. The story is completely speculative, which is primarily the reason why the film is so weak and uninvolving. Conspiracy theories can be interesting if there is some hard evidence to back it up, but this thing makes it all up as it goes along. The fact that it occurred so long ago only heightens how pointless it is. Everyone that was involved is now dead, so even if there is some truth to what it is propagating what difference could it possibly make now?

Richard Levinson and William Link who wrote the script where known for their love of mysteries and helped to create both the ‘Columbo’ and ‘Murder She Wrote’ franchises, but their character development was not one of their stronger suits. The cast of characters here are bland and cardboard with nothing interesting to say. I’m surprised that they managed to corral a decent list of big name stars to appear as they have little to do and for many of them are seen only briefly. William Atherton gives the film’s only interesting performance and I did like Charles Durning as the ship’s captain as well, but that is about it.

The recreation of the airship, which was painstakingly done by a group of 80 artists and technicians who worked around-the-clock for 4 straight months on it is impressive and resulted in a highly detailed 25-foot-long model. Watching it glide through the clouds are the film’s best moments as is the scene where Atherton’s character tries to repair a hole in the outer fabric and almost slips to his death.

(Below is a pic of the actual Hindenburg along with the model used in the film.) 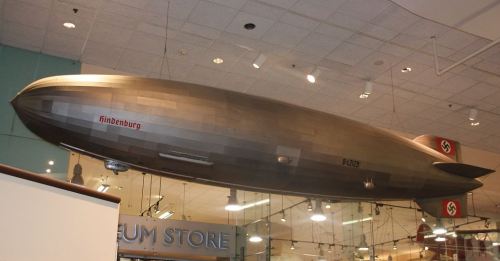 The climactic explosion, which should’ve been the film’s most exciting moment, comes off instead, like everything else in the movie, as protracted and boring. Director Robert Wise decided not to recreate the ship’s fiery end through special effects, but instead spliced in scenes of the character’s trying to escape the burning wreck with black-and-white newsreel footage from the era. This results in distracting the viewer and emotionally taking them out of the movie at its most crucial point because up until then everything had been in color and then suddenly it shifts to black-and-white making it seem like we are no longer following the same movie. The actual explosion and subsequent fire happened very quickly, in less than 2 minutes, but here it gets stretched to almost 8, which makes it seem too ‘Hollywoodnized’ and not authentic or compelling.

(Below is a pic of the Hindenburg explosion along with the burned out skeleton of the ship as captured the day after the incident.) 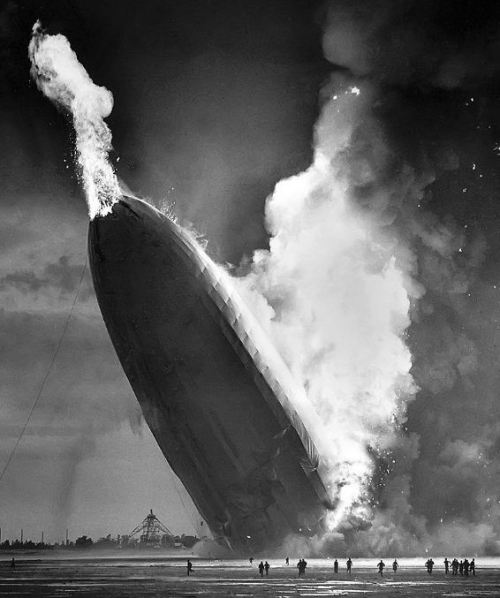 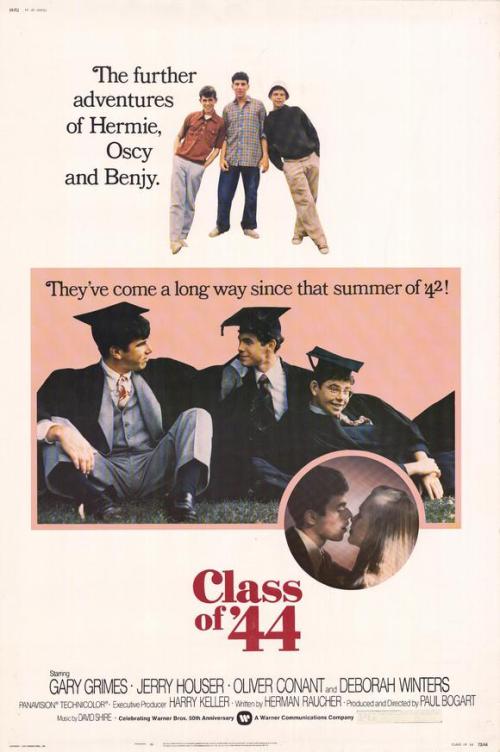 In this sequel to Summer of ’42 Hermie (Gary Grimes) and Oscy (Jerry Houser) graduate from high school and begin attending college while their friend Benjy (Oliver Conant) joins the army and goes off to war. Hermie takes part in a wide range of college adventures including starting up a relationship with headstrong budding feminist Julie (Deborah Winters) as well as learning to cope with the untimely death of his father.

As sequels go this one is unnecessary. The story in the first one had a perfect slice-of-life plot that needed no further exploration of the characters. Everybody seems out-of-place here as we keep expecting to hear the background noise of the crashing ocean waves, which was a strong element from the first film as well as an explanation as to what ever happened to Dorothy who never gets mentioned even in passing.

The boys look too young to be attending college particularly Hermie who still resembles a pre-teen not quite out of puberty while Benjy is seen only briefly at the beginning and then essentially forgotten. The scenes dealing with the death of Hermie’s father aren’t particularly compelling because in the first film the father was never shown or mentioned, so it seems like a story arch thrown in for cheap emotional dramatics and nothing more.

Unlike the first film this script by Herman Raucher is not based on any actual events in his life and comes off more like a broad generalization of what can happen to just about any student who attends college with the particular time period of the 1940’s not carrying much weight. The plot is episodic and not story driven, but there are still several enjoyable scenes including one where Hermi and Oscy and several other boys try to cram themselves inside a phone booth as part of a fraternity initiation.

The performances are good and I enjoyed seeing Hermie grow into a mature young man as well as William Atherton as a snotty fraternity brother in a part he seemed born to play. Winters though steals it as a headstrong young lady who shows shades of insecurity at the most unexpected times.

The production values are an improvement and the story has a nice comedy/drama blend. Those that attended college may take to it better, but overall it’s a generic excursion that leaves one with a flat feeling when it’s over.