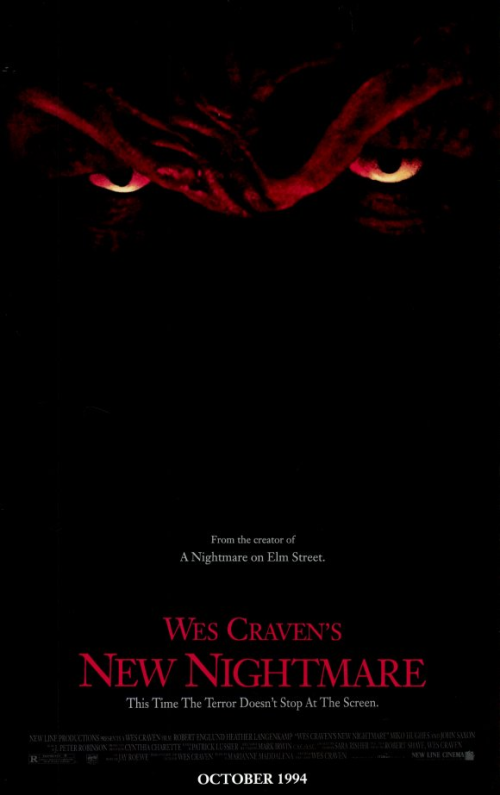 It’s been 10 years since the original Nightmare on Elm Street was released and actress Heather Langenkamp who played Nancy in the original is now have nightmares about Freddy and receiving strange phone calls. After talking with director Wes Craven, who is working on a new script in the series, the two surmise that some evil entity is using the character of Freddy Krueger as a portal to enter into the real world and it is up to Heather to once again play the character of Nancy in order to stop him.

The film is high on concept, but low on effective delivery. For one thing the film doesn’t go far enough with its original idea. The evil entity should not have been portrayed as just being Freddy all over again, but something much scarier and over-the-top. In my mind it would have been more interesting having Robert Englund being the one to have to go up against his own character instead of Langenkamp.  Despite the initial novelty of seeing the actors playing themselves the whole thing ends up devolving back into a rehashing of the same old formula.

The film is also overlong. It introduces its first act and then seems to take forever to get to the second one. There are too many gimmicks during the first hour including several scenes where a character, mostly Langenkamp, wakes up out of a nightmare only to find that she is in another one. The dream within a dream thing becomes confusing and irritating. The logic is threadbare, poorly thought out and many times a stretch.

The scares or I should say the attempted scares are pretty minor and not too prevalent particularly during the first hour. A lot of them are just stuff that is redone from the earlier films. When Heather’s husband starts falling asleep while driving home and then attacked by Freddy while on the road is very similar to the Dan character having the same type of attack while riding on his motorcycle in A Nightmare on Elm Street 5 and there it was much more creative.  When Heather’s friend Julie (Tracy Middendorf) has her body pushed up the walls of a hospital room and then on the ceiling while being slashed is exactly what happened to the Amanda Wyss character in the first film, but there it was creepy while here it is tacky. The same thing with Heather running up some steps in the climactic sequence only to have the stairs turn into mush just like what happened to her in the original.

The film uses computerized effects that only help to make things more overblown. When Heather’s son Dylan (Miko Hughes) races onto a busy highway and into oncoming traffic it is obvious his body was matted onto another screen and the scene reminded me too much of the Mel Gibson character doing the same thing in Lethal Weapon. The gothic castle-like setting that makes up the finale has an unimaginative Mazes and Monsters feel to it. The Freddy character has also lost his zing. I thought the character was supposed to have been someone suffering from burns, but here it looks like someone who has been skinned and very obviously a mask worn by an actor.

Hughes as the young Dylan character makes up the majority of the screen time. The kid is alright, but started to remind me of Danny Lloyd from The Shining especially when he tried to put on an evil possessed voice, which sounded very similar to Lloyd saying ‘redrum, redrum’.

The idea that this is supposedly a fresh perspective to the series is just an ill- advised gimmick that drapes what has become a very tired, mechanical formula that should have been put to rest. Out of all the sequels I consider this one to be the weakest.