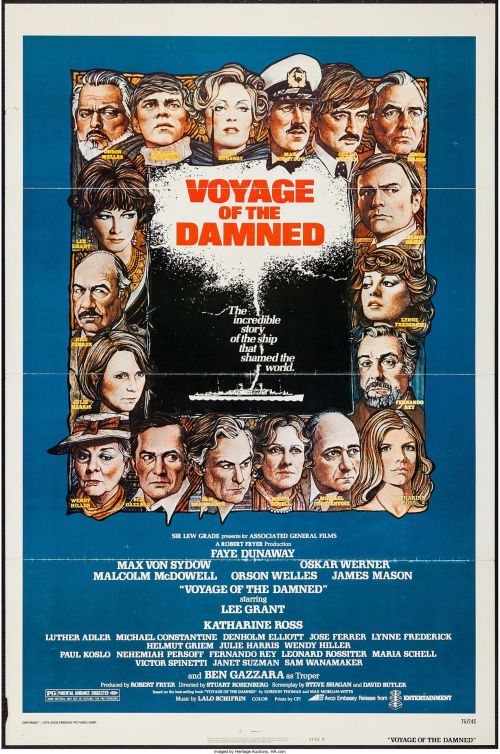 Based on the true story of the ill-fated voyage of 937 Jewish refugees who left the port of Hamburg, Germany in 1939 on the ocean liner St.Louis, which was supposed to arrive in Havana, Cuba where they hoped to start a new life free of the rising antisemitism that had plagued them in Europe. However, when the ship reaches Cuba they are not allowed to dock and when the ship’s Captain (Max Von Sydow) tries to take them to the US and Canada they are refused entry as well forcing them to return to Germany.

Given the high production values and riveting story-line I was expecting it to be far more compelling than it ends up being. It’s not like Stuart Rosenberg’s direction is poor either because it isn’t, but it never gains any dramatic traction and the more it goes on the more boring it gets. This is definitely one instance where cutting the runtime would’ve been advantageous. I know we live in an era where the ‘director’s cut’ is considered the gold standard, but sometimes there’s good reasons for why studios edit it and usually it’s because some of the footage just isn’t necessary. I watched the 158 version, but the theatrical cut was trimmed to 134 minutes and after watching this one I can only presume that version would’ve been an improvement and if anything could’ve gained a better pace, which is something that is seriously lacking here.

There also too many characters and it’s hard to keep track of all them or get emotionally invested in their quandary especially when by-and-large their all suffering from the same dilemma. The time span between when they show a character to when they return is so long that by the time you see them again you’ve pretty much forgotten all about them.

The large cast is full big names and familiar faces and a few of them do a terrific job. I felt Von Sydow’s performance as the beleaguered but stoic captain was right on-target and I also enjoyed Orson Welles as the glib Cuban politician. Kudos also should go to Lee Grant, who ended up getting nominated for a Best Supporting Oscar here, for her one shocking scene where she cuts her hair down to its scalp, but overall most of the talent gets wasted. This includes Denholm Elliot and Jose Ferrer who appear onscreen for only a few minutes and Katherine Ross who has only two scenes that come near the end, but still managed to somehow get a Golden Globe nomination for her efforts anyways.

The film ends on a supposed happy note when the ship’s captain informs the passengers that Belgium and France will accept them, but then the denouncement states that 600 of them ended up dying anyways during the German Occupation making the viewer feel much like the passengers that they’ve just spent almost 3-hours going in circles. Maybe that’s the point, but as an insightful drama it fails. I was almost hoping that the Captain would’ve gone through with his plan to have the ship crash off the shore of England and allowing the passengers to disembark as a safety precaution, but still trying to make it look like it was an accident and not intentional. Although this would’ve swayed from what really happened it could’ve been an interesting thing to see and brought some genuine action into the mix, which was otherwise missing. 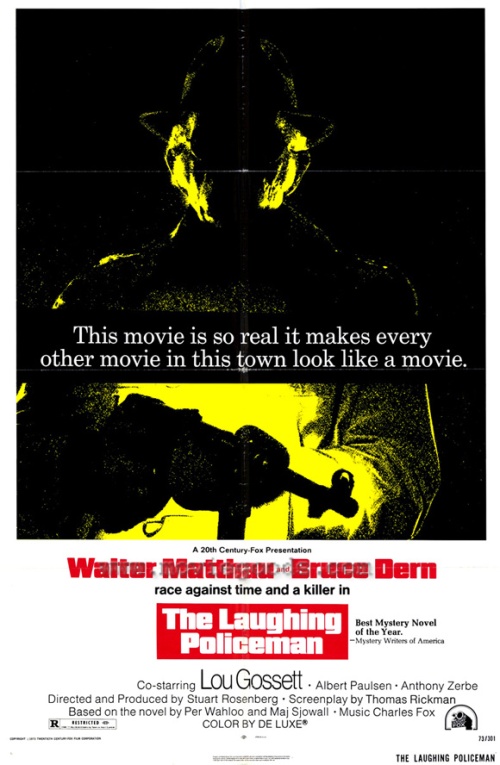 8 passengers on a San Francisco bus are slaughtered to death by a mysterious gunman for no apparent reason. When Police Sargent Jake Martin (Walter Matthau) investigates he finds that his patrol partner is one of the victims. He soon learns that his partner was working on another case during his off hours dealing with a murdered prostitute that Jake had also worked on, but couldn’t crack. He begins to believe the two cases are somehow connected, but his brash department head (Anthony Zebe) doesn’t agree and thinks it is a waste of time to pursue the possible connection while also sticking him with Leo (Bruce Dern) a younger cop who doesn’t always like to play within the rules and whose manner and methods conflicts with Jake’s.

The film, which is based on the novel by Per Wahloo and Maj Sjowall who also did the book version for Man on the Roof, has a finely detailed gritty nature about it that looks at the methods of a police investigation in a realistic and unglamorous fashion, which significantly helps this one stand out from the usual cop dramas. I loved the way they searched for clues on the bus and the autopsies of the victims as well as pursuing leads that never pan out, which is a very common occurrence in most police investigations, but rarely is ever shown in movies. There is even a shot of a tow truck removing the disabled bus from the accident scene once the investigation is completed.

Although the novel’s setting was Stockholm the movie transplants the action to San Francisco making the Bay City almost like a third character. Director Stuart Rosenberg manages to nicely capture the eclectic vibe of the area and the disdain many people had for the police during that era. The movie also uses very little music, which is a major asset and helps accentuate the realism. Outside of the closing credits the only time there is really any other music is near the end when Jake and Leo start following a suspect, which comes off as jarring and should’ve been left out.

Matthau who’s mostly known for his comedic parts does well in an atypical role, which due to his casting and the film’s strange title may make some think it is a comedy though this is far from it. Dern is terrific in a role that takes full advantage of his edgy acting style and I liked how the two characters don’t get along at first, but eventually get past their differences and use each other’s unique strengths to their advantage. I was disappointed though that there is a side-story dealing with Jake’s tumultuous relationship with his teenage son that gets introduced early on, but then dropped and completely forgotten during the second half.

Louis Gossett Jr. gets a star making turn as a brash street cop and Zerbe is superb in support as the gruff police chief. Joanna Cassidy has a brief, but interesting bit as a witness and I liked the shot showing her and Dern sitting amidst a row of tables with table legs made to look like human ones. It’s also amusing to note that Albert Paulsen’s character who becomes the main suspect in the film never utters a single word of dialogue.

The film’s biggest downfall though is with its ending. It is very hard to believe that a character such as Paulsen’s that is portrayed as being rich and having a lot of connections would feel the need to shoot and kill the bus passengers himself as most if not all rich people simply hire someone else to their dirty work. I also didn’t think that someone who walks down the street surrounded by lawyers would crack as quickly as this one does when Matthau comes to question him about the case. A typical well-off businessman would simply ‘lawyer-up’ and trust that the minimum evidence that the police have would not hold up in court instead of jumping into his car and racing down the city streets in a panic such as he does here. The finale becomes too conveniently Hollywood-like and seems to sell out on the film’s original concept, which left this viewer with a flat and ambivalent feeling towards it when it was over. 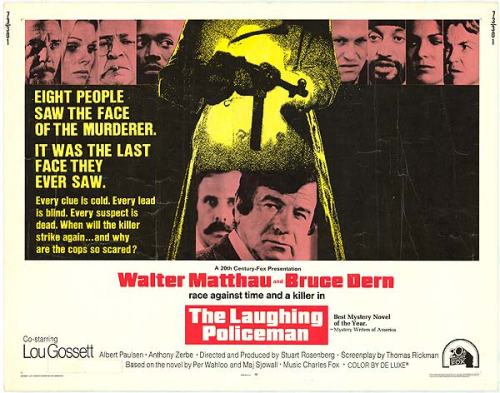