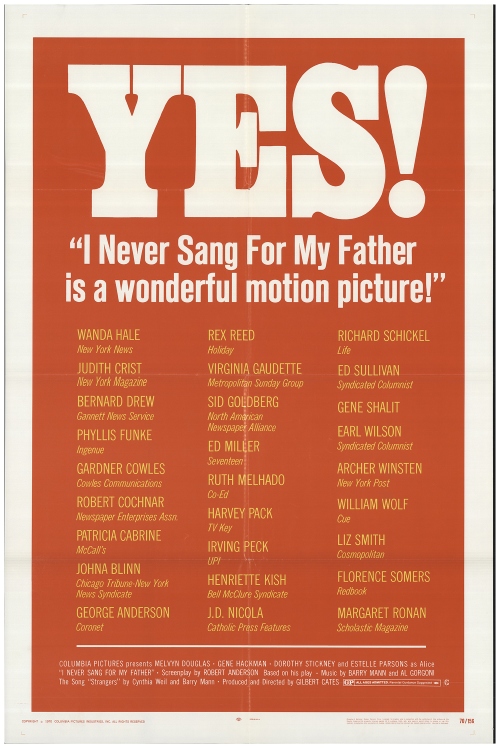 Based on the Broadway play of the same name written by Robert Anderson, who also wrote the screenplay, the story centers on college professor Gene (Gene Hackman) who tries to mend his relationship with his father Tom (Melvyn Douglas) a very bull-headed man who can’t seem to get along with anyone. When Gene’s mother (Dorothy Stickney) passes away suddenly it becomes a concern what to do with the father who is showing early signs of dementia and other health issues. Gene, who has recently been widowed himself, wants to remarry and move off to California, but his father prefers him to stay close by in New York. When Gene offers to move his father to California the old man refuses leading to a bitter feud between the two that also opens up old wounds.

To show just how good this movie is one only needs to compare it to Dad, which was an 80’s film starring Ted Danson and Jack Lemmon, which had a similar subject matter, but that film conveniently glossed over the many negative aspects of taking care of an elderly parent while this one tackles the downside head-on. Hearing the arguments that Gene has with his sister Alice (Estelle Parsons) and how neither one of them want to be straddled with the responsibility of being a round-the-clock caretaker I found to be refreshingly honest. Too many modern movies, in their attempt to make the lead character likable, never address these very real concerns. Also in the movie Dad the Ted Danson character flies across the country to help his father with no explanation for how this affected his job or finances while this one does touch on the economic realities. It also shows how elderly people aren’t always that lovable and can at times be genuinely nasty.

Douglas is outstanding as he manages to bring out different sides to his character. While the viewer finds him exasperating I still enjoyed the shots showing him kneeling at his bedside in prayer, which gave him, even as old and crotchety as he was, a child-like dimension. The conversations that he has about his own father and the poor relationship he had with him are quite revealing as it shows how the same issues can go across many generations with Douglas inadvertently treating his own son in the same shoddy way his old man treated him and not even realizing it.

With Douglas’ powerhouse performance Hackman gets overshadowed. He has fleeting moments where he displays his trademark anger and pent-up frustrations, but it doesn’t come-off as quite as genuine as it does in some of his other roles. It also would’ve been nice had there been some flashback scenes showing past altercations between the two, which would’ve helped the viewer emotionally connect to what he was feeling instead of having their differences just briefly touched on through dialogue. In many ways Parsons comes-off better and the reasons for her anger at her father is more clearly and eloquently explained.

The only complaint that I had with the film is when Hackman goes touring the assisted senior living homes. While the film had approached the material in a straight forward dramatic manner, which stays quiet true to the play, it suddenly shifts during this segment to becoming more artsy and cinematic by blocking out the dialogue and instead playing loud, moody score with a more subjective, hand-held camera. While this is all right I still felt it wasn’t needed and goes against the tone of the rest of the film, which had been very minimalist up until the then. The sudden pounding music doesn’t make the visuals showing the bleak living conditions of those places anymore shocking or disturbing and if anything becomes unnecessarily jarring and in-the-way.

These scenes also feature a very early appearance of James Karen as one of the directors of the senior facilities that Hackman tours. However, with the dark curly hair that he has here and the thick horn-rimmed glasses that he wears, you most likely won’t recognize him unless you look closely and even then you still might not think it’s him. With the decision by director Gilbert Cates to play music over these scenes we unfortunately never get to hear hear what he was saying or how he was trying to sell the dismal looking place to the potential customer, which could’ve been interesting.

Posted in 70's Movies, Drama, Movies Based on Stageplays