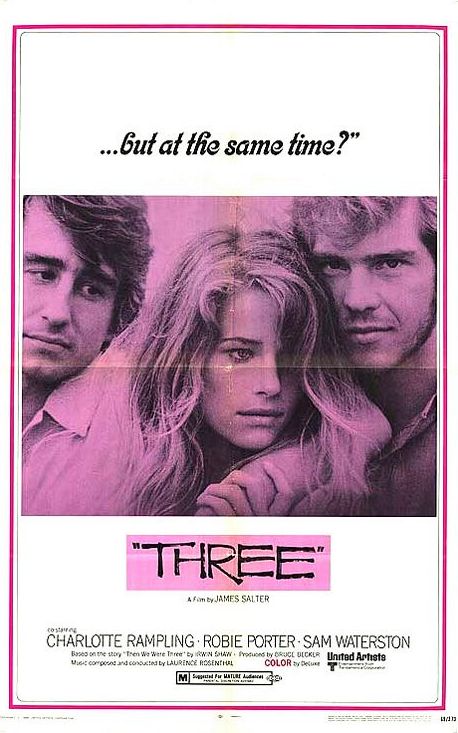 Taylor (Sam Waterston) and Bert (Robbie Porter) are two college chums spending their summer traveling through Europe. When they get to Italy they come upon a free-spirited young woman named Marty (Charlotte Rampling) who agrees to become their traveling companion, but underlying sexual tensions soon rise to the surface. Both men want to make a play for her, but resist because they fear it will ruin their friendship yet as the trip progresses the temptations get too strong to ignore.

Normally I enjoy a film with a laid back pace as I feel American movies tend to be too rushed and leave the viewer no time to allow the characters, story, or imagery to sink in. However, here it’s too slow with plot and character development at a minimum. The extraneous dialogue is not interesting and too much footage is given to capturing the Italian countryside, which makes this seem more like a travelogue.

Waterston is transparent as usual, which makes me wonder how he has managed to have the long career that he has had. Porter, who is better known as a composer, is better looking and much more dynamic and I was surprised that Rampling’s character doesn’t just gravitate towards him immediately as Waterston is dull and wimpy and not what most attractive women would want to consider.

Rampling is great and gives each scene an extra kick, which makes sitting through this meandering production slightly worth it, but the sexual tension is lacking. Supposedly this is what it’s all about, but for the most part it shies away from examining it even though it should’ve been constantly reinforced either through imagery, flashback or dialogue instead of being largely forgotten until the very, very end when it no longer mattered.

This was writer James Salter’s one-and-only foray behind the camera and it’s no surprise he never directed another one as he clearly shows no ability or understanding for pacing.  The characters are not unique enough to be captivating and one eventually begins to wonder why they’re bothering to watch it or what point the filmmakers had for even making it.