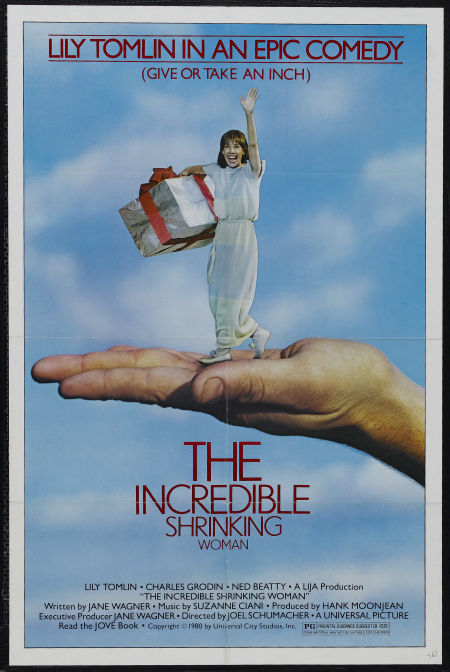 Pat Kramer (Lily Tomlin) is a housewife/mother raising two rambunctious kids (Shelby Balik, Justin Dana) while married to Vance (Charles Grodin) who works in advertising. After being exposed to some products from her husband’s company she begins to shrink until she becomes so small that she is forced to move into a dollhouse and drink out of thimble since a regular glass would be too big for her to hold.

The film is a modern remake of Richard Matheson’s The Incredible Shrinking Man and as much as I loved the original this version takes the storyline in a completely different direction, which for a while proves interesting. Director Joel Schumacher comes up with some wild color schemes and the knowing satire makes great points in its observations on modern suburbia as well as American consumerism. Screenwriter Jane Wagner manages to employ some well thought out scenarios and the special effects aren’t bad either.

Unfortunately by the second-half becomes muddled with scenarios that are no longer funny, but genuinely horrifying and sad instead. The satirical edge gets lost and replaced with an over-the-top mad-scientist-trying-to-conquer-the world angle that becomes cheesy.  I was also confused with how Pat was able to continue to find clothes to fit her especially after she gets smaller than even a toy doll. The film seemed to touch on every other possible problem, so they should’ve had at the very least had a throwaway scene analyzing this one.

The ending gets too cute for its own good as Pat shrinks to nothing and then has what’s left of the small outfit she was wearing fall into a puddle of spilled chemicals, which somehow makes her big again. This however ruins the poignancy that had been created from showing clips of bells being rung around the world from different countries in remembrance of Pat, which had a certain profound message that no matter how small you are you can still have an impact. Instead of giving the film some substance it goes for a last-second gimmick that cements it as being an empty-headed comedy and nothing more.

Tomlin’s performance is excellent as she creates empathy for her character, which helps make the story more engrossing as you genuinely build concern and sympathy for Pat’s welfare. Noted make-up specialist Rick Baker garnered a cult following for his convincing performance of an ape, although the shot of the animal giving some people in an elevator the finger is pushing it. The movie though as a whole works only in spurts with a message and tone that is too unfocused and inconsistent to be completely effective. 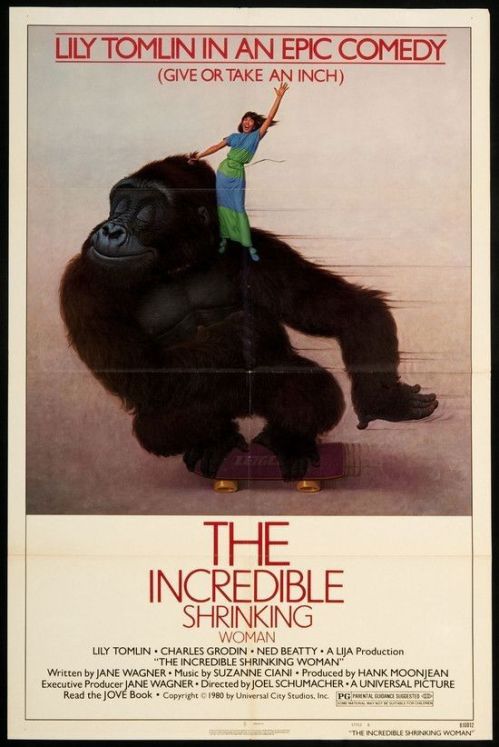 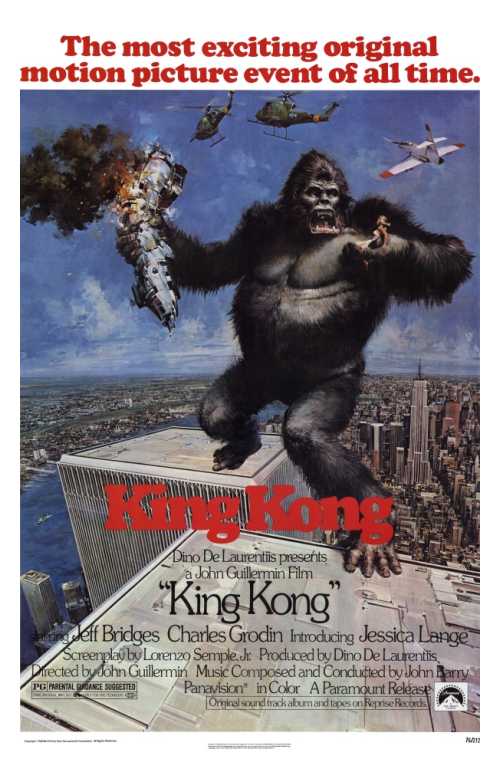 Fred Wilson (Charles Grodin) works for the Petrox Oil Company and heads an expedition in search of hidden petroleum reserves. He is particularly interested in a small, isolated island that is perpetually shrouded in fog and along the way they rescue Dwan (Jessica Lange) a beautiful, but flighty girl that is a lone survivor of a shipwreck. When the crew arrives at the island they find that it is inhabited by natives who perform some ancient, tribal ritual for a beast that they have caged inside a fenced-in area. They are intent in sacrificing one of their women to the beast, but when they spot Dwan they decide to use her instead where she then becomes the source of fondness to a giant gorilla named Kong. The crewmen are able to rescue Dwan and take the gorilla back to New York where Fred hopes to exploit the beast for his own monetary gain, but the gorilla escapes from his cage and goes on a rampage through the streets of New York looking for Dwan who he considers to be his.

This is a remake of the 1933 classic, which was later remade for a third time in 2005. Out of the three this one is considered to be the weakest, but I found that to be unfair as it still, while not being perfect, holds up well. The story itself is a bit dull and it takes too long until we are finally able to see the ape, a whole 50 minutes to be exact, but once the special effects get going it is impressive.

Some of the best moments come when he goes on a rampage in Manhattan and singlehandedly derails a subway car from its tracks and shakes it until all the people come tumbling out. His ride back to the states inside a freighter and the moment when he bursts through the giant fence on the island are equally exciting visually.

The gorilla is played by special effects artist Rick Baker inside an ape suit, which is something that he has done in other films as well. For the most part he does an excellent job, but I was bothered at the way the animal’s walk gets portrayed. To me it was too fast like the way a human walks instead of an animal and most apes walk on all-fours most of the time, so the fact that this one didn’t appeared unnatural. There are times too when the fur clearly looks like its sewn into a suit and not coming from the skin.

I also didn’t like the moment when the ape gets unveiled for the first time to the American spectators and he is shown wearing a giant crown. Adding in the crown gave it too much of a campy flair and hit home the exploitation theme in a heavy-handed way that was not needed. I also found it hard to believe how they were able to measure the beast’s head, build the crown to a correct proportion and then somehow get it on as they would’ve had to use a crane to do it and he would’ve fought with them while they did and most likely ripped it off the second it was put on.

Grodin is fun as the egoistical, but clearly clueless leader of the expedition and he ends up getting most of the film’s laughs.  Lange though in her film debut is fantastic and I loved her free-spirited, thrill-seeking character who is partially scared of the beast, but also intrigued by him and so consumed with getting media attention that she compromises her better judgement in the process.