4-Word Review: She wants it all.

If you ever wondered where political correctness got its start it was probably southern California in the mid 60’s. Here everything is neutralized and modified so as to ‘keep up with the times’. There’s even a drive-in church where the minister proudly exclaims that the Lord answers every prayer because “whatever happens is the answer”.

Tuesday Weld plays teenager Barbara Ann Greene who can’t be happy unless she has it all. She meets fellow high-schooler Allan Musgrave (Roddy McDowell) who because of his super intelligence is able to figure out ways for her to get what she wants. Yet the more she gets it the more unhappy she becomes.

It’s a satire on our consumer driven society, but it is too restrained and soft. A supposedly cutting edge film looking at our modernized world should have been filmed in color and not black and white. It also should have been faster paced with a heavier emphasis on the zany and outrageous. Instead we only get hints of this with a lot of slow segments and even some clumsy drama. The funny offbeat bits are spread out to thin and do not make up for the other parts that are boring and contrived.

There are some technical problems too including a lot of ‘outdoor’ shots that were really filmed indoors on a soundstage. They fortunately don’t do this anymore, but when they did it looked tacky. There is also a boom mike that is very obvious to see in several shots.

McDowell is not eccentric, nor unique enough for such an offbeat character. Although perpetually boyish looking he was way, way too old to be playing a high school student as he was 37 when this was filmed. Out of all the performers Harvey Korman comes off as the most amusing playing the overtly congenial school principal.

4-Word Review: Lover in the attic.

This wacky film nicely exudes the mod, experimental wave of filmmaking that permeated the era of the late 60’s. The story takes place in London and is about a clothing manufacturer’s wife named Harriet Blossom (Shirley MacLaine) who one day calls her husband Robert (Richard Attenborough) while he is at work to tell him that her sewing machine has broken down. Robert sends his lowly assistant Ambrose Tuttle (James Booth) over to their house to help her fix it. Harriet is a bit bored with life and feels neglected by her husband, so she not so subtly seduces Ambrose and then hides him in the attic where he soon takes up residence.  He comes out only when Robert is away, but the unexplained strange noises that Robert hears and the many close calls make him think he is going insane and leads him to a nervous breakdown.

Director Joseph McGrath’s highly visual style is the real star. The lighting, editing, camera angles, set design, and costumes are creative and imaginative.  The home that was chosen for the setting has a nice architectural flair especially the attic and billiards room, which seems to be draped by a large stain glass window. Certain film professors show this movie to their classes as an example of how stylish direction can help accentuate a story as well as deftly define its era. I was disappointed to see that although McGrath is still alive he hasn’t done a film since 1984, which is a shame as it is obvious from this that he is quite gifted and I would have liked to see him doing more.

This is generally considered a vehicle for MacLaine, but to me her performance isn’t interesting. I think she is a first rate actress, but her character here is the only normal one in the film and she acts more like an anchor trying to corral the craziness around her. Booth, as her lover, goes to the other extreme, but doesn’t fare any better. He is too clownish and is always wearing various disguises and going through different personas, which makes the character unrealistic and cartoonish. If anything, out of the three main leads, it is actually Attenborough who does the best. His nervous and confused facial expressions are priceless. The scenes were he comes home from work and to ‘unwind’ pretends to be a conductor of a large orchestra while listening to a loud record, is amusing.

The colorful supporting cast though, full of legendary British Pros, is what steals the film. Some of them appear just briefly, but they still make a memorable and funny impression. Barry Humphries, playing a male character and not Dame Edna, is good as an art dealer. John Cleese, in one of his very first roles, is engaging as an argumentative postal clerk.  The best however is far and away Freddie Jones as the snippy, suspicious, relentless detective that will leave no stone unturned in his pursuit of Ambrose, who once he moves into Harriet’s attic proceeds to completely drop of society and disappear.

Although generally entertaining the plot doesn’t go anywhere and is simply a set-up for a lot of absurdity. What is worse is the fact that this based on a true story that in its own right was very intriguing.  In the real-life incident that took place in 1913 a 33 year old woman by the name of Dolly Oesterreich met a 17 year old named Otto Sanhuber. She, like the character in the movie, was a bored wife of a wealthy textile manufacturer, and took in the young man as her ‘sex slave’, which he readily accepted. To avoid possible suspicion she had him move into their attic, where he remained for five years and despite some close calls was never caught.  When the Oesterreich’s moved to Los Angeles in 1918 Dolly made sure that their new home had an attic as well and Otto then took up residence there and the deception continued until 1920 when Otto finally ended up killing the husband.

Of course none of that happens here. In fact Ambrose is fond of the husband and considers the three to be one big happy ‘family’, which is offbeat for sure, but not particularly satisfying. Again, this film does have some funny moments. I thought the scene where Robert invents the world’s first inflatable bra only to have the system go awry during an exhibition, which forces the model’s breasts to grow to unbelievable proportions before they go floating in the air, to be hilarious.  Still the end result of this production can best be described as cinematic soufflé. 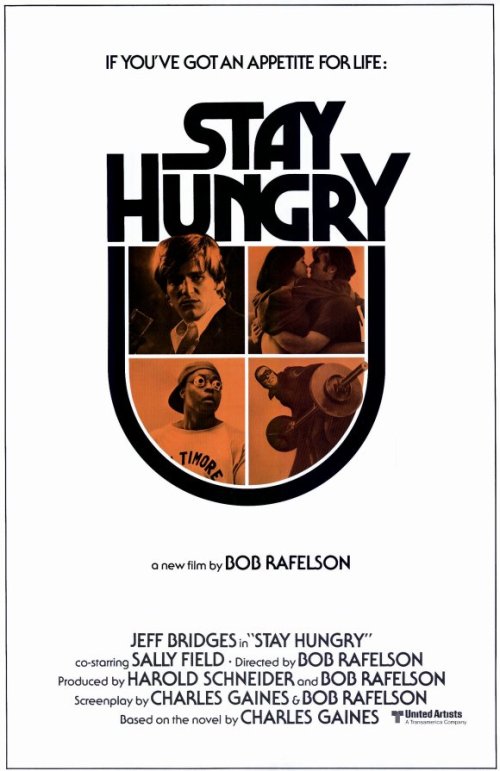 4-Word Review: Read the book instead.

Craig Blake (Jeff Bridges) is a young southern man left alone with his butler in a big mansion when both his parents die in a car crash.  He works at a shady investment firm run by the con-man Jabo (Joe Spinnell).  They have managed to purchase all the other buildings on a block except for a workout gym. Craig is told to meet with the owner of the gym named Thor (R.G. Armstrong) and transact a purchase, so the firm can use the space to build a high-rise office complex.  However, once Craig meets with some of the people working there, including Joe Santo (Arnold Schwarzenegger) who is a body builder and uses the gym to prepare for the Mr. Universe title, as well as the pretty receptionist Mary Tate (Sally Field) he starts to have second thoughts about going through with the deal.

The film is based on the 1972 best-selling novel of the same name by Charles Gaines. There are quite a few differences between the book and the film, with the novel being much better. In the book there is no real estate firm, or potential acquisition of the building. Craig is simply bored with life and goes to a gym on a whim and uses the idea of bodybuilding as a way to find an identity. The book also features a camping trip that the group goes on and a fascinating psychedelic experience that Craig has when he takes an illicit drug that was completely cut out of the movie. The book has much richer characterizations and a profound philosophy that is devoid in the movie.

The film is poorly paced. Nothing really seems to happen and it only comes together at the end and by then it is too late.  Director Bob Rafelson tries to make the movie take on too many things. It shifts awkwardly between drama and sardonic comedy, but fails to achieve any type of cohesion, or momentum.  The flow is more like a European style of filmmaking where the story is told in a more relaxed pace and features long takes and side conversations. However, the dialogue isn’t interesting enough to carry it and the film focuses too much on the relationship between Craig and Mary, which happens too fast and doesn’t seem to have enough chemistry.

I also didn’t like how the character of Craig is portrayed. Bridges gives his usual dependable performance, but he has no southern accent even though he is from the area and everyone else speaks in a very thick one. He talks and acts much more like he is from the west coast and, like the viewer, acts as if he is some detached stranger that is just passing through with no real roots in the area, people, or customs. I think the Hollywood producers intentionally did this because they figured mainstream audiences could not relate to a southerner, who are still straddled with the unfair stigma of being hick, redneck, and racist. So the character was modified to bring broader appeal, but in the process becomes unrealistic and a bit annoying.

On the technical end it is okay although the budget looks limited. Filming on-location in Birmingham, Alabama helps, but I would have liked to have seen more of the area. There are a few unique scenes that make it somewhat enjoyable. One includes Craig stealing a painting off the wall of an office and another involves a throng of half-naked body builders spilling out onto the streets of the city and holding up traffic. There is also a very violent altercation at the end between Craig and Thor that features them battling with each other while using equipment from the gym. The action here is choreographed and edited nicely and looks genuinely real. There is also a brief moment where Field and Bridges go water skiing that was done by the actors themselves and not stunt doubles.

Schwarzenegger is appealing in what is considered his first official acting debut since in his previous two films his voice was dubbed and he had no speaking lines in the other. I liked the way the character is humanized here and shown with a different side to him including having him play the fiddle in a country band. Field is good playing a very feisty and rambunctious character. It also features her in a nude scene although it is from the back only. Woodrow Parfrey also deserves mention as Uncle Albert simply because his eccentric acting style always grabs your attention even in the smallest of roles. He also is the film’s narrator and speaks with the most authentic, best sounding Southern accent out of everyone.

R.G. Armstrong is by far and away the most memorable part of the film. He wears a hilariously awful wig throughout and is slimy in a real goofy way in every scene he is in. His best part comes when he has sex with a couple of prostitutes while on some of the workout machines. He also did, at age 60, his own nude scenes, so you have to give him credit there.

Posted in 70's Movies, Dry Humor, Movies Based on Novels, Movies that take place in the South, Movies with Nudity, Quirky