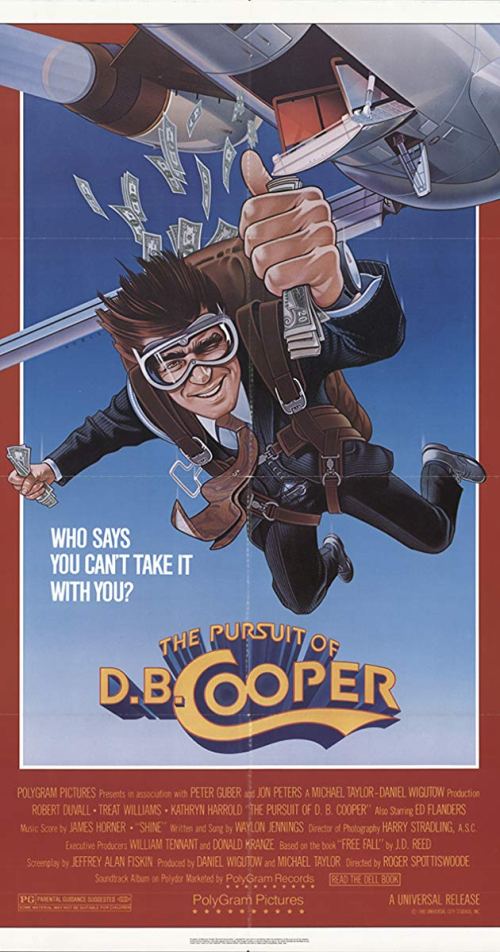 Loosely based on the real-life incident involving a man using the alias of Dan Cooper, but later reported in the media as D.B. Cooper, who hijacked a Boeing 727 as it flew towards Seattle, Washington on the night of November 24, 1971 and parachuted out of the plane with $200,000, but whose remains have never been found. In the film D.B. Cooper is the alias for Jim Meade and is played by Treat Williams as he parachutes into a wooden area and becomes chased by Bill Gruen (Robert Duvall) who was Meade’s sergeant in the army and feels he knows him better than anyone.

Had the film made some legitimate attempt at accuracy it might’ve been moderately intriguing, but right from the start it plays fast-and-loose with the facts including having the jump take places in the sunny daytime when in reality it occurred at night during a rainstorm. The time period is supposed to be late autumn, but many people are shown doing summertime activities like having a couple going skinny dipping in a pond even though it would’ve been too chilly for that. There’s also a ridiculous scene where Paul Gleason, playing a useless character that was not needed at all, going headfirst through the front windshield of a moving car and receiving a slight cut on his right cheek as his only injury.

John Frankenheimer was originally hired to direct, but after having numerous arguments with the producers over the film’s insipid script he was fired. He was then replaced by Buzz Kulik who tried turning it into a topical drama by portraying the Cooper character as being a disgruntled Vietnam Vet. Roger Spottiswoode and Ron Shelton were then brought it to ‘jazz-it-up’ a bit with some stunt-work and the chase scene down the rapids is impressive, but the humor they put in is dumb and the ‘Dukes of Hazard-like soundtrack ill-advised.

I started to feel that it would’ve worked better had it not connected itself to the real incident at all but instead had Williams portray a fictional character all together. It also should’ve analyzed the planning/preparation phase much more and shown him pulling off the actual hijacking instead of just starting out with the parachute jump.

While he doesn’t look anything like the sketches shown of the real Cooper I still found Williams to be fun in the lead and Kathryn Harrold lends great support as his resourceful wife. Duvall is solid as usual and even though it doesn’t take place in the Pacific Northwest, which is where the real incident occurred, I still enjoyed the sunny scenery, but that’s where the good points begin and end in a movie that clearly had misfired written all over it before even one frame of it was filmed.

Amy (Catlin O’Heaney) is getting ready to get married, but finds herself stalked by a mysterious stranger (Tom Rolfing). She begins to worry that she may fall victim to a psycho that has been murdering women who have been engaged to marry. Detective Gamble (Lewis Arlt) whose own fiancé was murdered at the hands of this same maniac goes on a relentless quest to stop the attacker, but will it be too late?

The film starts out well and has early hints of Scream where we see an audience viewing a reenactment of an urban legend on a theater screen while one of the women in the audience gets killed by the psycho at the same time, which I found to be quite clever. Unfortunately it goes completely downhill afterwards and never recovers. Lots of slow scenes filled with extraneous dialogue and characters that add nothing to the suspense.  Most horror films quicken the pace as it gets nearer to the end, but this one doesn’t making the tension almost non-existent.

The identity of the killer is another issue. We are shown his face right up front, which hurts because usually with these things the killer’s true identity is kept a secret until the end, which adds to the entertainment. I also thought it was ridiculous to believe that a man murders one woman because she broke up with him and decided to marry someone else, but then robotically decides to murder every other bride he finds. I wanted more of a backstory to the character and felt one was sorely needed. It also seemed implausible that the police would be clueless as to who it is as when the first bride died they would most assuredly interview her ex-boyfriends, which is standard procedure and had this guy locked up or closely monitored long before things spiraled so out-of-control.

The special effects are minimal and in fact there is barely any blood at all as everything is implied. We see one severed head in a fish tank, but otherwise the camera cuts away before anyone is shown getting stabbed or killed.

O’Heaney is transparent in the lead and isn’t even all that cute. Arlt as the dogged detective isn’t much better. It’s fun seeing Tom Hanks, who appears at the 59-minute mark, in his film debut. James Rebhorn can also be seen here in an early film role with a full head of hair playing a college professor who cheats on his wife with one of his students. You can spot Paul Gleason in a bit part as one of the detectives as well as Robin Lamont during the opening sequence who is best remembered for her rendition of ‘Day by Day’ in both the stage and film version of Godspell.