Three skydivers, who make a living going around the country doing airshows for the public, stop off at a small Kansas town on a fourth of July weekend that ends up changing all of their lives. Mike Rettig (Burt Lancaster) is the eldest and the leader of the group. He seems unhappy and suffering from some inner turmoil that he is reluctant to elaborate on.  He ends up having an affair with one of the attractive middle-aged women in town named Elizabeth Brandon (Deborah Kerr).  Joe Browdy (Gene Hackman) is restless and impatient and has a fling with the town stripper (Sheree North).  Malcolm Webson (Scott Wilson) is the introspective member of the trio.  He grew up in the town that they are in and uses the visit as a way to reconcile with his demons from the past.

MGM was hoping for a big hit with this one as it reteamed Lancaster and Kerr 16 years after their famous embrace in From Here to Eternity. The film broke ground as it was the first to feature an established and respected actress who was nearly 50 years of age doing a nude scene. Kerr, who looked great both with her clothes on and off, can be seen fully nude from the front and back during a lovemaking scene with Lancaster.  Yet the film failed to gel with the public.

There were some things that I did like. One is the fact that it was filmed on location in Kansas. The opening shots capturing the countryside of the Midwest really gives a strong visual sense of Americana.  The scenes taking place in the neighborhoods of the small town give the film an added dimension that a studio back-lot just couldn’t do.  The skydiving sequences, which take up the majority of the time, are breathtaking and exciting. The aerial photography makes you feel like you are right there jumping out of the plane and free falling into the air.

The basic plot though is dull and uninteresting.  The characters and situations are contrived and derivative.  It is almost like the story was a second thought to the stunt work and put in merely as filler. I also didn’t like the pretentious quality of the production that made it seem like it was making some sort of profound statement when in reality it was nothing more than second rate soap opera.  The whole thing would have worked better had they skipped the story and made it into a documentary on skydiving instead.

The most frustrating thing about the movie is the fact that the Mike character dies at the end when he decides, for no apparent reason, not to open his chute and goes, literally, splat on the ground right in front of a throng of spectators. I actually thought this was one of Lancaster’s better later career performances and I was intrigued as to what was causing his character’s inner-strife, but the film offers us no clue, or hint.  I thought there should have been a backstory and even some flashbacks. The ambiguity leaves the viewer cold and unsatisfied and makes the film seem incomplete.

The only possible explanation may come through researching actual Gypsy moths and then correlating the species to the characters. Per Wikipedia, the female gypsy moth is unable to fly. This would then explain why Elizabeth refused to run off with Mike despite her unhappy marriage simply because she could not ‘spread her wings’.  The adult male moth always dies in July, which would then explain Mike’s death. No reason for his demise was needed because his life cycle was ending regardless. July is also the time when the moth lays her eggs, which would explain why Joe and Malcolm, who were much younger than Mike, decided to go off on their own separate ways at the end.

I  ended up finding more misses than hits with this one and can’t help but label it as a misfire. 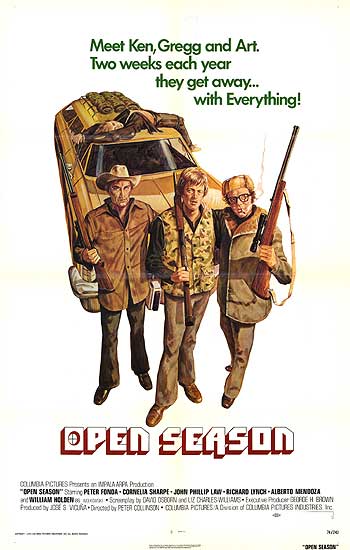 4-Word Review: Humans are their prey.

This is the type of film that has a really great concept, but ends up being ruined with its poor execution. It is based on the novel ‘The All-Americans’ by David D. Osborn, who also co-wrote the screenplay. The story involves three ‘All-American’ suburban family men (Peter Fonda, Richard Lynch, and John Phillip Law) who once year go on a ‘hunting trip’ except here they hunt people. They typically pick their victims up at random and then drive them to their isolated hunting lodge in the woods. They feed and entertain them for a week and then give them a few supplies as well as a compass and tell them that the highway is twenty-five miles north.  If they are able to make it to the highway they are free and if not the three men will hunt them down like animals. The victims are always given a thirty minute head start, but none of them ever make it. The movie focuses on a man and woman (Alberto de Mendoza, Cornelia Sharpe) that are having an affair and are kidnapped by the three outside of a truck stop.

The beginning is well-done and quite easily the best part of the whole film. It goes back in time to when the three men where in college and accused of gang raping a young lady.  To the shock of the girl’s mother the prosecuting attorney tells them they have no case because these boys are great athletes with stellar reputations and nobody would believe they would do something like that. I liked this part for two reasons. One is the fact that at least we are given some sort of history to these culprits. A lot of movies never do this and you always wonder how these psychos where able to get away with it for so long. At least here we are given a backstory and somewhat plausible one at that.  Many sociopaths have been able to fool people for years simply because they smart enough to play the respectable role in society and bring out their deviance only when it is completely safe to do so. Also, athletes, especially in the past, where given much more leeway and many of their transgressions would get over-looked. So to me this made a lot sense and helped get me into the movie right away. I also liked the imagery used over the opening credits as well as the very haunting music score.

I also liked how the film then cuts to the present day showing the men at a neighborhood block party and interacting with their wives and kids. The three actors are perfect for their parts.  They were all B-actors who’ve made a career playing sleazy characters and fall into the roles easily. Richard Lynch is especially good. In real life he once set himself on fire in 1967 while taking LSD and his scarred, pale, and rough looking face always makes a creepy impression. Director Peter Collinson does some good camera work with detailed bird’s-eye view shots that show how sprawling the forest is and indeed gives the viewer a very remote feeling.

Unfortunately the rest of the film goes downhill. Part of the problem is that there is just too much talking.  In fact the whole middle section is spent with a lot of drawn out conversations that aren’t interesting, or well-written. It saps the tension out of the film until there isn’t any left.  It isn’t until the very end that they finally get around to letting the victims go out into the woods and then tracking them down. However, this too is poorly handled. The action is limited and not well choreographed. The whole sequence goes by too quickly and comes off like it was nothing more than an after-thought that fails to take advantage of its immense forest setting.  In fact for a film with such a sadistic and exploitive theme there is actually very little violence to speak of and no gore at all. The three bad guys also end up becoming quite banal and one-dimensional. They show no distinctive personalities whatsoever as they agree with each other on everything and seem to do nothing more than laugh and guffaw and each other’s juvenile jokes and antics.

If you are interested in watching this film then please don’t read any further as it may be considered a spoiler:

The film’s twist ending is weak as well. It features actor William Holden (a very accomplished actor and why he took this role, which amounts to nothing more than a cameo, I will never know) playing the father of the girl that the three men raped in college. He secretly followed the men on their hunting trip and decides to have his revenge by gunning them down just like they had done to all their victims. Again, the action here is handled in an unexciting and unimaginative way. I couldn’t buy into the fact that these men, who supposedly fought in Vietnam, would panic so quickly and act like a bunch of scared children the minute they found out that they were being shot at. They show no savvy or survival skills and allow themselves to be easily picked-off in an uninspired fashion.

I have always enjoyed Deliverance and I liked how this film used a variation of that theme where instead of the civilized man going out and coming to terms with the savage of the wilderness they instead go into the wilderness to come to terms with their own, inner savage. More action, better tweaking of the characters, and a faster pace and this film could’ve been a cult classic as the ingredients are all there. As it is now though I think it is much too bland to interest or intrigue anybody.