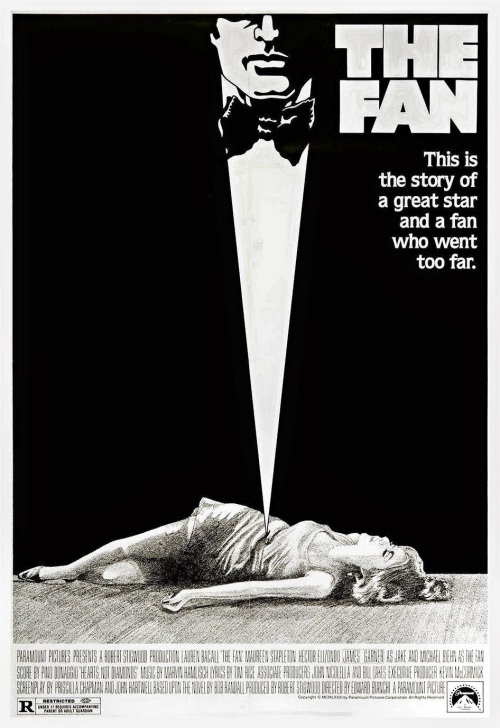 Douglas Breen (Michael Biehn) has become obsessed with aging film actress Sally Rose (Lauren Bacall) and wants to meet her. He begins by writing her fan letters, but Sally’s secretary Belle (Maureen Stapleton) intercepts them and sends an autographed picture of Sally in return, which gets Michael seething as he wanted a personal response from Sally instead. His letters become more frequent and threatening. Eventually he decides to injure Belle in order to get her out of the way as well as kill anyone else in Sally’s life, so that he can meet with Sally unimpeded and have her all to himself.

One of the quandaries that I had was the casting of Bacall who I felt was too old for the part. I realize that in the Bob Randall novel of the same name, which this film is based, the actress character was also an aging Hollywood star, but as stalking has become more prevalent since this film was released, it’s been shown that stalkers prefer younger, more attractive women with a ‘virginal’ appeal and who they feel they can better control or ‘possess’. With Bacall, and her very feisty personality, you don’t get any of that. She’s also supposedly playing someone who is 49, but looks more like 60 and was actually 56 when it was filmed. While I got more used to her as the film progressed, the script doesn’t take enough advantage of her patented bitchy side, and except for one brief spat with her secretary, her presence is too benign.

The real waste though came from James Garner, who’s given a bland part that doesn’t help propel the story in any way. Originally when the film was first released and I saw his name in the credits I thought he was the stalker, which would’ve been interesting as he’s rarely ever played a bad guy, so it would’ve been intriguing seeing him thrown out of his comfort zone, but unfortunately that ends up not being the case.

Biehn is certainly a good actor although his psycho character in the TV-Movie ‘Deadly Intentions’ is far more interesting than the one he plays here. His weapon of choice, a shaving razor, is not visually intimidating enough and the victims die too easily by slumping over dead after just one quick cut across the chest. The scene where he stabs and kills a guy by swimming underneath him in a public pool is well shot, but implausible as there were so many other people around, including in the pool that it seemed hard to believe that Biehn would’ve been able to escape undetected.

Director Ed Bianchi, who directed a lot of award-winning commercials before doing this, reveals a stylish flair and I enjoyed the way he captures New York particularly the urban cafes and city streets, but the plot itself offers few surprises. Ultimately it would’ve worked better had the identity of the killer been left a mystery until the very end. This way the tension would’ve mounted as the viewer would remain in the dark as much as Sally as to who actually was after her.

The climactic sequence has Bacall confronting Biehn all by herself while trapped inside an otherwise empty theater. Bacall doesn’t respond to things the same way a conventional female might by screaming, which is great, and she also literally tells the guy off right to his face just as he’s about to stab her, which is great too, but the way she props up his dead body into a theater seat seemed bizarre. Why would she bother doing this? Just leave the dead body lying on the floor and run for help. Seeing the bird’s-eye shot of the killer lying there would’ve looked creepier and instead of a voice over of him reading the first letter he sent her have another letter written by another obsessive fan read and thus creating the double-ending famous in a lot of 80’s slasher flicks where you think the threat had been defeated, but was actually still out there in another form.

Posted in 80's Movies, Movies Based on Novels, Movies that take place in the Big Apple, Slasher/Gore, Thrillers/Suspense