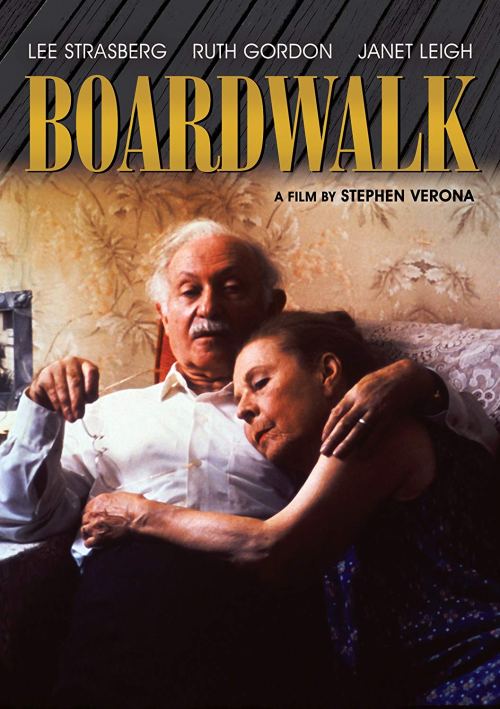 David and Becky (Lee Strasberg, Ruth Gordon) are an elderly couple who spent their entire lives living on Coney Island, but find that their once nice neighborhood has been overtaken by a street gang lead by Strut (Kim Delgado) who demands money from David for ‘protection’. When David refuses to comply it causes Strut and his gang to go on an unrelenting terror campaign where they not only evade David’s home and scare Becky, but also destroy the synagogue where he worships.

The film has a nice independent feel to it and I enjoyed the way the neighborhood’s of Coney Island, many of them with old and picturesque homes gets captured, but this also proves problematic because the area comes off looking too nice to be marred by gangs. In order for the plot to make more sense the couple should’ve been living in a rundown tenet building in an extremely bad part of town instead something looking straight out of a Norman Rockwell painting.

The gang itself is laughable and outside of their campy looking leader seem to be made up of children no older than the fifth or fourth grade. The kids behave threateningly one minute and then get quickly scared off the next. The way they scurry off like a flock of frightened birds makes them seem not very street tough at all, but instead like a bunch of hellions with too much time on their hands and not enough adult supervision. I was also confused why they never get caught and thrown into juvenile detention since they commit most of their crimes in broad daylight for everyone to see.

The story doesn’t focus that much on their activities either as there are long segments in between the gang activities that deal instead with Becky’s cancer and David’s grandson Peter’s (Michael Ayr) rocky love-life, which is actually more interesting and made me believe that the gang storyline could’ve been cut out completely and the movie would’ve been better off for it.

Strasberg, gives a good performance though he’s a bit too serious and probably unable to play a comedic role, or be funny even if he wanted to. Gordon is okay too, despite the fact that her delivery always makes her sound like she’s drunk, but having her collapse and die quite literally in the middle of their 50th wedding anniversary party was over-the-top.

I enjoyed Joe Silver’s supporting performance as David’s grown son especially when he chases a kid who refuses to pay for his food out onto the street and then physically drags him back inside. The scene where David and Becky look through an issue of Playboy before going to sleep is amusing too, but overall the amateurish way it portrays the young gang and the violence that they commit ends up sinking it especially with its  laughable ending. 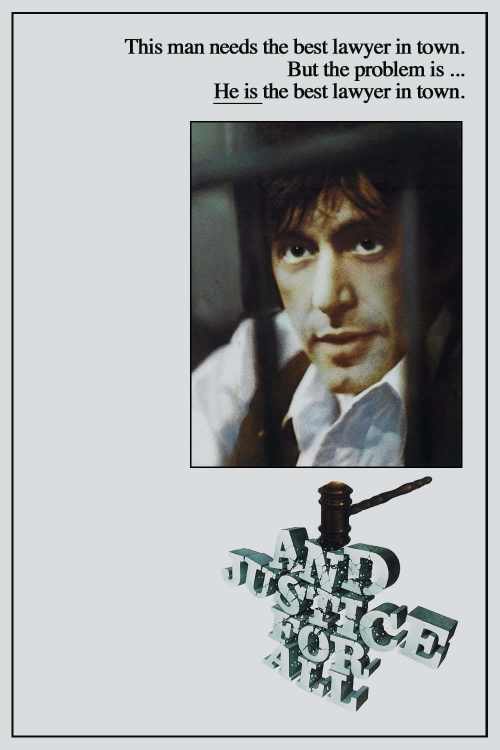 Arthur (Al Pacino) is a defense attorney who becomes increasingly more frustrated and disillusioned with the court system. He’s fighting to get one of his clients, Jeff (Thomas Waites), out of jail as he’s been sitting behind bars for over a year simply because he was mistaken for somebody else while also being forced to defend Judge Fleming (John Forsythe), a man that he vehemently hates, from a rape allegation.

The script by the husband and wife team of Barry Levinson and Valerie Curtain is chockfull of great insights into the American legal system and how messed up and prone to corruption it can sometimes be. Defense lawyers have in the past been glamourized in TV-shows like ‘Perry Mason’, but here the viewer gets a more stark assessment of their profession as they watch them being forced to defend those that they know are actually guilty. Yet it also balances this by showing how public defenders can also be the lone voice to those who are truly innocent and have no one else to speak up for them.

The film has a weird comedy/drama mix that doesn’t work and ends up getting in the way. When I first saw this many decades back I liked the humorous undertones as it gave production a surreal, satirical edge, but upon second viewing I didn’t find it to be as amusing. The script makes good hard-hitting points and adding in the humor only diminishes this message and takes away from the seriousness of the subject matter.

The side-story dealing with the suicidal judge, played by Jack Warden, should’ve been excised. I’ll admit the images of him eating lunch while sitting out on a ledge of a tall building, or trying to kill himself with a rifle are memorable, but pointless and by coupling this judge character with Forsythe’s crooked one seems to imply that all judges are either bad or crazy, which isn’t fair.

The storyline dealing with Arthur visiting his senile grandfather, played by Lee Strasberg, should’ve been cut out as well as it has nothing to do with the main plot. It also brings up many unanswered questions like why is Arthur close to his grandfather and not to his own parents and why did his parents apparently ‘abandon’ him? This backstory never gets sufficiently addressed and seems like material for a whole different movie altogether.

The storyline involving Judge Fleming is the most intriguing and should’ve been made the film’s primary focus, but I was disappointed with the way the judge glibly admits to his crime, which takes away the mystery angle and I would’ve preferred the truth coming out in a more dramatic manner. The film also has a very old-fashioned take to his situation by saying that just because the character is involved with BDSM activities that somehow makes him ‘deviant’ and more prone to committing rape, which has been proven untrue as there are plenty of people who can enjoy kinky activities with consenting partners and still remain ethical.

Overall the film is worth catching and has many interesting moments including Pacino’s final speech that he gives to a packed courtroom, which is a gem. This also marks the film debuts of Christine Lahti and Jeffery Tambor as Pacino’s lawyer friend who slowly goes crazy. 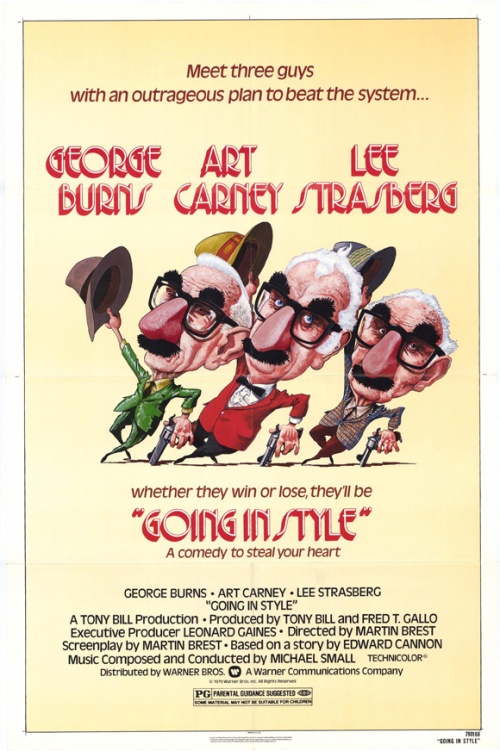 Three elderly men (George Burns, Art Carney, Lee Strasburg) who are living together in a rundown Brooklyn apartment and on a fixed income decide one day to liven up their lives by robbing a bank. None of them have ever committed a crime before and don’t even know how to handle a gun, but end up pulling off a major heist nonetheless and getting away with $35,000 in cash. However, things begin to fall apart once the crime is completed and even a side-trip to Vegas can’t keep the feds from slowly moving in.

On the outset the plot seems like a very funny idea and some of the social context about the difficulties of growing old that gets mixed in with it is right on-target. However, to me it just doesn’t come together. The men latch on to the idea too quickly and I would’ve expected more resistance or having at least one of them chickening out at the last second. These are individuals with no criminal record and although I realize that they are bored why couldn’t they have just taken up a new hobby or social cause instead. It’s not like they were out on the streets or completely desperate. The apartment they resided in looked livable enough and I might’ve bought into the premise better had one of them needed a major operation and thus the others were forced to go to extremes like robbing a bank to help pay for it.

The part where they sit around a table trying to figure out which stack of bullets goes into which gun is amusing and quite possibly the best bit in the film, but there’s a lot more comic potential that could’ve been squeezed out of this otherwise quirky plot that is never taken advantage of. The crime gets carried off in too much of a seamless fashion with a myriad of possible problems that could’ve and should’ve cropped up being completely overlooked.

The second half that deals with two of them taking a trip to Vegas seems like a plotline to a whole different movie.  Writer/director Martin Brest should’ve chosen one or the other by either playing up the bank robbery premise and its preparation more or just rolled from the beginning with the Vegas trip, which has a lot of funny untapped potential as well, but cramming the two together or not taking enough advantage of either one was a mistake.

Burns gives an excellent performance and I was amazed how very talented this 83 year-old gentlemen was especially when you factor in that he never had any formal acting training and was basically just a vaudeville comedian, but here he creates a convincing and surprisingly savvy character. Strasberg, who spent years as an acting teacher and didn’t do any film roles until much later in his life, is superb as well and I was disappointed his character wasn’t in more scenes.

A reboot of this film has already been completed and set for an April 7, 2017 release. It will star Michael Caine, Morgan Freeman and Alan Arkin as the three elderly men and I’m quite interested to see how the two versions deviate from the other. I’m hoping that the comedy angle gets played up more and from reading the synopsis I have an inkling it will. It hopefully will be an improvement as I came away from this one feeling like it had missed-the-mark.