Peter Bonerz, who also co-wrote the script along with director John Korty, plays Perry a struggling comedian working with the famous San Francisco improvisational group The Committee who is finding that life onstage isn’t as fulfilling as he had thought. The story focuses on his many different relationships and behind-the-scenes activities as he searches for some meaning to what he does.

The film is a loosely based look at Bonerz’s own experiences during his time with the group. It has a definite cinema vertite feel and look, which helps accentuate the improv attitude. Some of the situations he goes through do indeed help shed light for the viewer as to the difficulties of the profession particularly the part where Bonerz and a friend stay up late one night trying to brainstorm a creative ad campaign for a bug spray and finally do manage to come up with something clever only to have it frustratingly nixed by the client over concerns that it may possibly offend their targeted audience.

I also found it interesting to see how much things have changed in regards to casual affairs and relationships as Bonerz is seen meeting woman for the first time and then going back to their place for sex and in one instance having the woman go off to work and leave him still in bed at her place without seemingly any concern about him being a potential psycho or thief.

Bonerz, who is probably best known for playing the Jerry Robinson character in ‘The Bob Newhart Show’ does well in the lead and I was impressed with his variety of voices and characterizations. However, the many skits that they do, which were filmed onstage in front of an audience weren’t all that funny or engaging. The only one that is mildly humorous involves a bit with Richard Stahl describing a new robot (played by Bonerz) that is programmed to be used as a peace demonstrator during campus protests.

Korty’s over-direction doesn’t help as too much emphasis is put on mood over substance. His attempts to instill an existential slant to the material falls flat and his use of shooting each scene with a different color filter is distracting and ultimately annoying. The final twenty minutes veers too much away from the main story as the Bonerz character decides to take a vacation at an isolated retreat where he gets into a relationship with a nude model, which meanders and is not compelling or interesting. 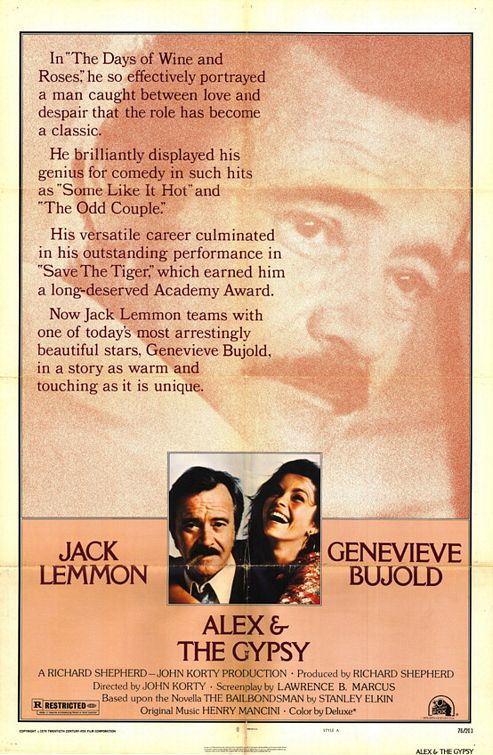 4-Word Review: Gypsy out on bail.

Alex is a middle-aged bail bondsman who is down on life and masks his disappointments with cynicism. By chance he meets the beautiful Maritza (Genevieve Bujold) a young gypsy woman who travels the countryside reading people’s palms and futures for a living. When she is accused of trying to kill her father and thrown into jail Alex decides to post her 30,000 dollar bail in an attempt for a brief romantic fling, but she instead spends the whole time trying to escape and keeping the overly-stressed Alex constantly on guard to prevent it.

The film has a pleasantly laid-back, free-spirited style to it that at times does meander, but nicely reflects the attitude and feeling of the decade that it is in. Director John Korty wisely pulls back and doesn’t try to over-direct, but instead allows his talented cast to carry the picture by creating well-defined and relatable characters. The dialogue and conversations are full of dry, acerbic wit and just the right amount of jaded sensibilities to keep it hip and real.

Lemon is great and has grown as an actor by taking on roles that are more world-weary and edgy  and going light years from the clean-cut, all-American young man type characters that he played in the comedies from the 50’s and early 60’s where he always was naïve and in-over-his-head. Here the character is like an extension of the one he played in Save the Tiger that being a middle-aged man who has lost his faith in everything and everyone and yet still holds out for that elusive moment of magic. His side comments are amusing making this one of his funniest and most endearing performances.

Bujold is ravishing and in fact I don’t think I’ve ever seen her looking better. Korty seems to know how to photograph her in just the right way by making full use of her prominent and alluring eyes. Her moments on screen give off a subtly sensual quality. Her nude scenes aren’t bad either particularly when she is lying handcuffed to a bed almost emotionless while Lemmon, who is under the covers, attempts to have sex with her.

James Woods is also terrific showing a surprising knack for comedy as Alex’s nerdy and timid assistant. Although his character has only limited screen time he skillfully manages to almost steal the film from his two more established co-stars especially in a scene in the bail office where Alex gets bribed by a mafia criminal as well as another one inside a hospital where he tries to explain to Alex why he foolishly allowed Maritza to get away.

The ending is the film’s only real letdown. It is not a particularly bad one, but it is a little too cute and doesn’t seem to mesh well with the rest of the film. It also offers no real conclusion and leaves the viewer hanging as to what ultimately became of these characters. A little more of a side-story particularly the one involving the bounty hunter (Todd Martin) might have given the film a bit more excitement and dimension.

I also wasn’t too crazy about Henry Mancini’s melodic and serene score. He’s a great composer for sure, but something with more of an acoustic or modern folk rock tinge might have fit the story’s theme and mood better.

4-Word Review: Married to your opposite

This film is based on the short story ‘The Illusionless Man & the Visionary Maid’ by Allen Wheelis and centers around Henry (Tom Rosqui) a hard-bitten realist with no illusions to anything. He lives a rather solitude life working as a termite exterminator. Then one day while walking in a park he bumps into Lorabella (Ina Mela) who is his complete opposite. She is full of ideals, dreams, and fantasies. Despite an awkward courtship the two get married and the film deals with the rocky, winding road that it takes.

This was the directorial debut for John Korty who later went on to direct the critically acclaimed TV-movies ‘Go Ask Alice’ and ‘The Autobiography of Miss Jane Pittman’. His talents are on full display here as he institutes a visual design to a story that initially doesn’t have any. I loved some of the picturesque moments particularly when Henry and Lorabella take a long quiet walk in a wide open field that eventually stretches all the way into a forest. The black and white cinematography gives it just the right cinema vertite feel and the music is perfect especially the flute solo. In an age of overblown plots and mind numbing special effects it is nice to see someone take a risk with a story that is subtle, basic, and restrained. There is some nice simple, but profound moments here that could never be replicated in the big budget productions, but have a great impact here. Despite the whimsical nature many people are sure to see a bit of themselves in the characters and it is its ability to tap into that very basic, universal truth that makes this film special and unique.

The casting is astute. Rosqui is spot-on as the realist. He has a perpetual scowl on his face that is just right for the character and seems to remain even in the brief moments when he is smiling. Mela is equally good. Her expressive eyes, delicate features, and wispy voice perfectly reflect the traits of her character and the camera captures her well. She never appeared in another movie and I was sad to hear that she died at a young age.

Initially I was put-off by the Lorabella character falling so madly in-love with Henry after she bumps into him and following him all around even though he responds to her in a very cold and reticent way. I felt it was unrealistic that someone wouldn’t notice the obvious aloofness, but then I realized that is the characters whole problem. She projects traits onto the people she meets as well as everything else in life from her own quirky mind that aren’t really there. This comes to an amusing head when she has affairs with various different men where she shows the same tendency and ends up consistently getting the same empty result. These vignettes are the funniest moments in the film as well as the scene where she bakes Henry a chocolate cake that is shaped to look like a giant termite.

I really have only a few complaints with the film. One is the voice-over narration by Burgess Meredith. Meredith has a great voice and a few of his lines are gems particularly his opening monologue and
the very last one. However, there were moments when I would rather have heard what the characters were saying especially when the couple goes to an art museum as I thought it would be interesting to hear the different interpretations each character had to each display. Near the end in an attempt to show the characters aging Henry’s hair is dyed white, but it looks tacky like it was frosted on in a similar way that is done to white Christmas trees. I also thought it was strange that in the very final scene his hair suddenly goes back to being black, which didn’t make any sense.

Since this film is very obscure and had a limited run upon its initial release the only way to obtain it is through the director’s personal website at www.johnkorty.com The neat thing here it that when you order a copy Korty personally signs the DVD and even sends you a letter along with it. For a lifelong film collector such as myself I thought that was pretty cool and it even made my day.