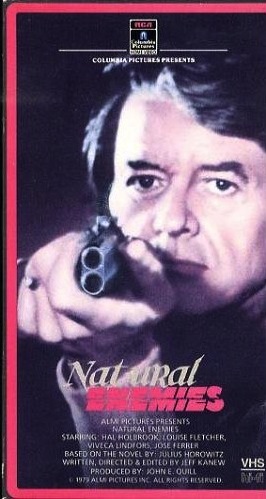 Paul Steward (Hal Holbrook) is a middle-aged suburban father who wakes up one morning having decided that by the end of the day he will shoot and kill his wife and three children with his hunting rifle. His rationale being that life is full of inevitable disappointments and his kids are ill prepared to face life’s harsh realities, so by killing them he will be in a sense ‘protecting’ and ‘saving’ them. The rest of the film deals with conversations he has with his friends debating on whether he should go through with it or not.

Writer/director Jeff Kanew is probably best known for having done Revenge of the Nerds and this film is probably as different from that one as you can get. It is an excellent and interesting directorial debut for the most part. It is not completely successful, but you have to give him credit for putting such challenging material onto the screen. It is based on the novel by Julius Horowitz, which was probably never intended to be made into a movie, but Kanew uses the voice-over narration to its full effectiveness and I loved the quant and remote setting of the colonial home that Paul resides in.

It is really the conversations and the ongoing philosophical debates that Paul has with various acquaintances that gives it a fascinating and intellectual subtext. I especially liked his discussion with Harry (Jose Ferrer) a concentration camp survivor as well as an unintentionally amusing one with a cab driver who complains that a 247 a month rent on a 3 bedroom apartment in Queens is ‘too expensive’ even though you would be unable to find one there that cheap today. The strongest is the one that he has with his wife Miriam (Louise Fletcher) at the end that proves to be not only revealing, but riveting.

I’ve always considered Holbrook to be one of the finest actors around and his performance here is flawless and helps give the film its impact. Fletcher is also quite good playing the polar opposite of her Nurse Ratched character. Here she is vulnerable and fragile instead of rigid and authoritative and even has a scene inside a mental hospital as a patient. The fact that she can play such different characters so solidly proves what a brilliant actress she is.

The tone is incessantly bleak and downbeat, which could easily be a turnoff for most viewers, but doesn’t lessen the validity of many of the points that it makes. There is a strong Ingmar Bergmanesque quality to this that I really liked and this film could prove quite provocative for those looking for something that is thought provoking and outside of the mainstream.

Posted in 70's Movies, Drama, Movies Based on Novels, Movies that take place in the Big Apple, Movies with Nudity, Obscure Movies, Psychological