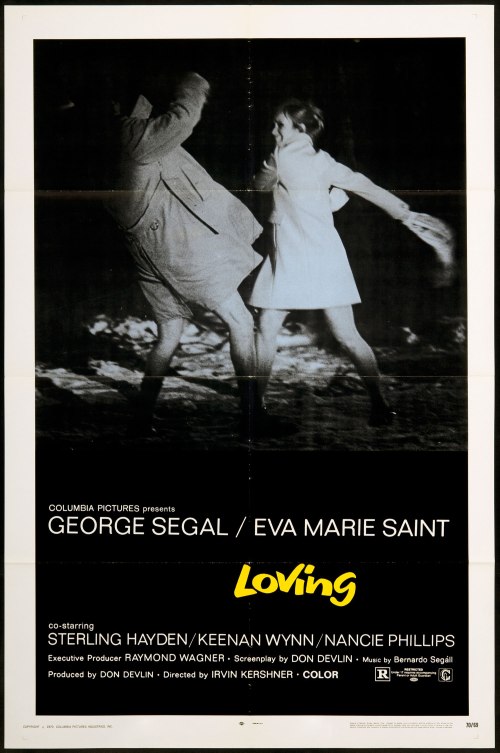 Brooks (George Segal) is a commercial artist who spends most of his time chasing after clients, which he finds exhausting and takes away from the creative process. Although married to the beautiful Selma (Eva Marie Saint) he still sees  Grace (Janis Young) on the side, but she’s tired of being the other woman and wants him to divorce his wife and commit to her, which he resists. Despite all of these issues Brooks manages to keep his philandering hidden until one night when they attend a party at a friend’s house where his fooling around unexpectedly comes out into the open for all to see.

So many films have tried to capture that perfect day-in-the-life feel, but usually end up failing by either jazzing-up the drama, or becoming boring by  not having enough happening. Director Irvin Kerschner manages to find the right balance by having the characters continue to do things as they speak. For instance showing Brooks’ boss (Keenan Wynn) converse with him over the phone while folding up his hideaway bed. Why was he sleeping on the couch? Was he having marital problems of his own? Could be, but this visual approach allows the scenes to remain active while also conveying how everyone has issues and not just our protagonist. It also remains realistic as most people are usually doing other things while talking on the phone and never just sitting motionless like it gets portrayed in many other movies.

I enjoyed too how the film explores the job duties that Brooks has including the way he takes photos of models, sometimes he even using himself, and then traces their outlines from the picture to create a different artistic rendering, which I found fascinating. Much of the reason for these intricate details has much to do with the fact that the script is based on the novel ‘Brooks Wilson Ltd.’ by John McDermott under the pen name of J.M. Ryan, who was an illustrator in real-life, for Disney studios, and parlayed his experience of the craft to the main character. I also found it interesting how Brooks’ clients would sometimes have minor, subjective complaints about his work forcing him, for the sake of pleasing them and making money, to begrudgingly change what he had originally created and thus showing how the business side can squelch the artistic inspirations of creative people and take away the enjoyment they once had for their craft.

Even the children characters get handled much better than in most films. Granted their parts have very little to do with the plot, but still like in every parent’s life they’re always around causing disruptions and noise even when you have your mind occupied with other things. They’re also not portrayed as sickingly sweet or excessively bratty, but like with most kids an equal combination of both. The oldest girl, who looked to be about 8, also has one of the film’s funniest moments as she’s shown reading a book on the sofa while a nude model, who her father is sketching, stands right in front of her, which she finds to be no big deal.

The film’s best moment though is still the ending where Brooks goes to a party and makes love to his best friend’s wife (Nancie Phillips) in a child’s empty playroom to the amusement of the the other guests who watch them in another room, unbeknownst to Brooks, on closed circuit TV. Not only is this scene hilarious, but dramatically powerful as Will (David Doyle), whose wife is caught fooling around with Brooks, physically attacks Brooks outside afterwards and the look of anger and betrayal on his face reveals, despite the funny set-up, how emotionally devastating philandering can be to the other spouse.

The film though fails to offer any conclusion. We sit through 90-minutes of seeing the marriage slowly disintegrate, but then are left watching the couple staring at each with no idea whether they were able to patch things up, or divorce. The viewer feels cheated that no clear answer is given and a brief denouncement showing where the main character ultimately ends up, whether it be with a new love, his same wife, or all alone, should’ve been added. 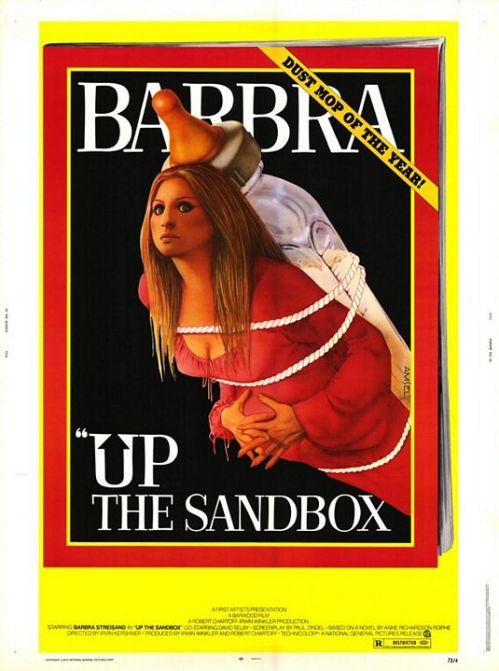 Margaret (Barbra Streisand) is a neglected housewife taking care of her two children while her husband Paul (David Selby) busily works on his novel and thesis. She lives in a rundown New York apartment that seems to have bugs crawling from everywhere. Her nagging mother (Jane Hoffman) pressures her to move back with them to the suburbs, but she enjoys the excitement and independence of city life over lily white suburbia, so she resists. Now she finds that she is pregnant with her third child and this along with the other stresses causes her to slip into secret fantasies that become more and more outlandish.

This film didn’t do well upon its initial release and is a bit forgotten, but deserves a look simply for its unique and memorable fantasy segments. The scene where she joins a black militant group that gets inside the Statue of Liberty and wires it with explosives is pretty good as is the part at a party where her stomach suddenly balloons out as if she is pregnant and when she pushes it in it makes her breasts larger. The scene where she meets a Fidel Castro-like dictator who takes off his shirt to expose that he has female breasts is funny and the finale that takes place inside an abortion clinic is interesting. The best though is when she is captured by an African tribe of topless women. The shot of their grossly overweight leader whose gigantic, sagging breasts seem to overlap her entire body ends up being the film’s most lasting image.

Hoffman is hilarious and a perfect caricature of a meddling mother of adult children. The part where Margaret fantasies about stuffing her mother’s face into an anniversary cake and then the two roll around on the floor where Margaret then punches her in the face had me laughing-out-loud.

Paul Zindel’s script nicely balances the fantasy with the gritty reality of urban living. It also envelopes the feminist issues with the social upheaval of the times and the speech that Margaret gives about women needing to be less like men and more like themselves is excellent.

Director Irvin Kerschner makes fine use of the New York locales giving the viewer an eclectic taste of its crowded neighborhoods and street culture as well as its epic skyline. I loved the cinema vertite style that has a sophisticated and trendy feel.

Streisand herself seems to be having a lot of fun and purportedly this is her favorite out of all the films that she has done. This was just before she went through her frizzy hair phase and the long straight style that she has here I feel makes her look sexy.

The pace is unusual especially for a comedy in that it isn’t frantic and does not have any quick edits. Instead the set-ups are quite slow and seem at times to be almost dramatic before throwing in a surprise punchline. Personally I liked this approach, but the unconventional style might have proved confusing to certain audience members who didn’t know what genre to place it in and may have been the reason for the poor box office returns, which is shame as the production overall is excellent and intriguing. 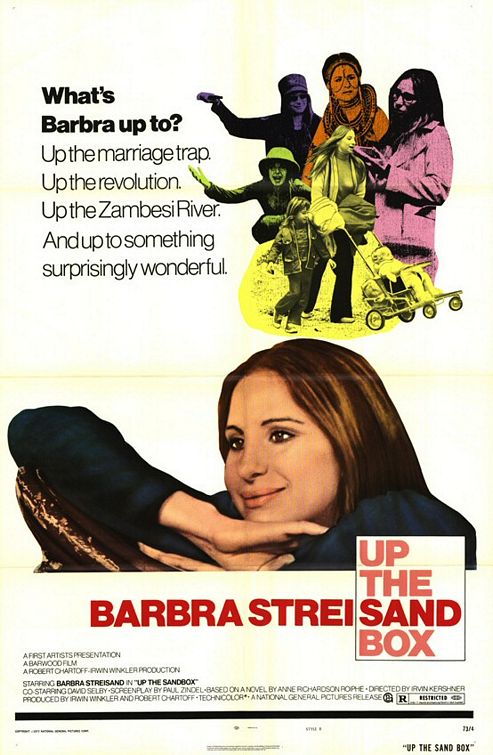 Posted in 70's Movies, Black Comedy, Movies Based on Novels, Movies that take place in the Big Apple, Movies with Nudity, Surreal/Fantasy 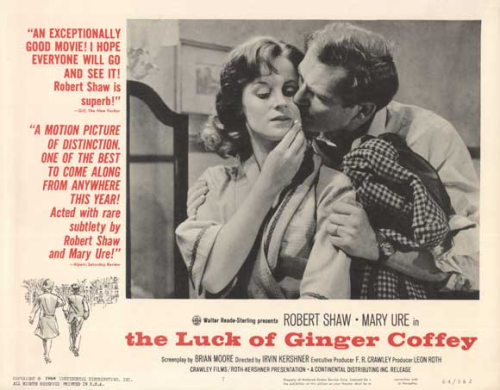 4-Word Review: He needs a job.

Ginger Coffey (Robert Shaw) is a middle-aged man living in Montreal whose dreams and ambitions far outweigh his grim predicament. He moves from one low paying job to another convinced that his lot in life will improve. His wife Vera (Mary Ure) decides to leave him and Ginger tries to win her back while juggling two jobs and hoping to get a promotion in one that never seems to come.

As a vivid look at the daily lives of the everyday working class this film hits a solid bullseye. The conversations between the co-workers and the monotonous and sometimes demeaning job interview process and Ginger’s on-going arguments with his wife and daughter are all true to form. There is no pretension and director Irvin Kershner keeps everything at a bare-bones minimum giving it almost a documentary style and making the viewer feel immersed in the bleak environment. The outdoor shots of the city are unexciting and cinematically unappealing, but help reflect the grim level. Watching Ginger get kicked out of his apartment and have to carry what is left of his belongings and then place them on the outside sidewalk while he goes in to visit his daughter in her school is quietly powerful.

Robert Shaw is excellent. This is a man who had by all accounts had a very dominating and proud personality in real-life and usually played characters with the same traits, so seeing him play against type and succeed is interesting. What is really effective is that he makes the character very human and likable despite his constant goof-ups, which keeps the viewer compelled to his situation.

Ure, who at the time was married to Shaw in real-life, gives an equally outstanding performance. Her perplexed facial expressions are perfect and the fact that we see her character grow and become more confident is good.

I also must mention Liam Redmond as Ginger’s cantankerous boss, who is nicknamed by his employees as ‘Hitler’. Ginger’s rushed job interview that he has with him is one of the film’s highpoints as is the moment when Ginger dashes away from him when he is caught making a personal phone call.

The only real complaint I have with the film is the ending, which is for the most part non-existent. I have seen vague wide-open endings in my movie viewing lifetime, but this thing is a cop-out and really boring one at that. I think when a viewer has spent nearly two hours empathizing with his difficult  and precarious situation that they deserve some sort of finality, or at least a hint of what became of him and whether he ever did find that ‘luck’ that he was so convinced was out there.