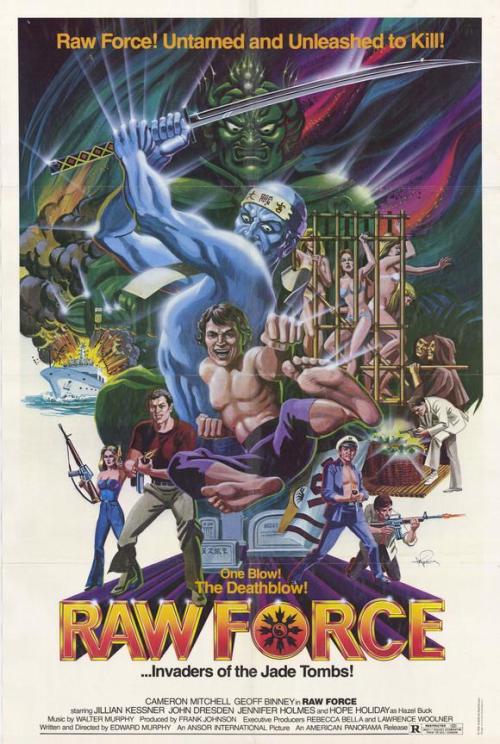 A group of martial arts students board a boat owned by Hazel (Hope Holiday) and piloted by Harry (Cameron Mitchell). During their ride the boat catches fire and they are forced to abandon it and get into a raft. After several days at sea they come upon an island that is the home to some ghosts of famous martial artists as well as a female slavery ring run by a group of monks. When the three groups meet it becomes a wild ride of sex and violence.

The film, which was shot entirely on-location in the Philippines, is clearly an exploitation cheapie and on the sex side it does pretty well as there is an abundance of nudity particularly during the first 45 minute or so that should satisfy any voyeur since the models for the most part are pretty good looking. However, the script is corny and dumb. Way too much time is spent on the set-up featuring a lot of stale conversations between wooden characters and comic sidelights that are silly and uninspired. The action itself is poorly captured and not very exciting while lacking in blood or realistic looking special effects.

Veteran character actress Holiday is actually the best thing playing a ditzy middle-aged woman sharing a love/hate relationship with Mitchell. Carl Anthony who plays Lloyd a man who considers himself much more of chick magnet than he really is amusing and Camille Keaton best known for her role as Jennifer Hills in the original I Spit on Your Grave and slated to star in its recently announced sequel has a bit part as a ‘girl in toilet’.

This film may be good for a few laughs on a bad 80’s movie night with friends, but the limited budget doesn’t allow it to distinguish itself from the myriad of other B-grade features that came out at the same time. The film’s one and only good moment comes during a scene at a bar where a fight breaks out and the naked lady stripper continues to dance on the bar top while remaining completely oblivious to the action around her.