4-Word Review: He follows her around.

This film, which is based on the Peter Schaffer play, deals with Charles (Michael Jayston) an uptight British accountant who thinks that his wife Belinda (Mia Farrow) is having an affair. He hires Julian (Topol) a goofy private detective to follow her around and see where she is going and what she is doing everyday while he is at work. Unfortunately for Charles Julian starts to fall in love with Belinda as he is following her and she in him, which only further complicates matters since she was initially not seeing anyone and all those trips that Charles thought were so suspicious were simply innocent excursions.

The biggest problem with this film is that it is too lightweight probably more so than even other lightweight films. Nothing really happens. Julian just follows Belinda around much to her amusement, but the two don’t share any dialogue nor ever consummate their pseudo-relationship. The film simply spends long drawn out sequences showing the two following each other throughout the streets of London and occasionally giggling at their ‘little game’ and that is about it. You keep waiting for that second act to kick in, but it never does, which after 95 minutes starts to make the whole thing almost pointless.

Topol is miscast in the lead and ends up being the film’s weakest link when he should have been the strongest. He was fresh off his award winning performance in Fiddler on the Roof and this movie was supposed to make him into a leading man, but the attempts at turning him into a variation of Inspector Clouseau fail badly. His bright white suit that he wears looks garish and ridiculous especially for an undercover spy. Watching him constantly stuffing his face with food starts to get obnoxious and his buffoonery becomes more annoying than engaging.

Farrow is appealing and her natural child-like fragility is perfect for the part. The scene where she states to the shock of an upper-crust crowd at a formal dinner party that rapists should be punished by having their ‘thing’ cut off publicly is amusingly edging and the film would have been better had it gone a little more in this route.

Jayston is the one that comes off best. He plays the proper British gentlemen with all his staid mannerisms perfectly. What I really like though about him is the fact that he does love Belinda, but just doesn’t know how to show it effectively.

This was an odd project for legendary director Sir Carol Reed whose final film this was. The story doesn’t allow for much visuals although the way Reed captures London both from aerial shots as well as the downtown streets that Belinda visits is excellent. The movie almost seems to work as a tour guide of London, which in some ways is the best thing that can be said about the film. 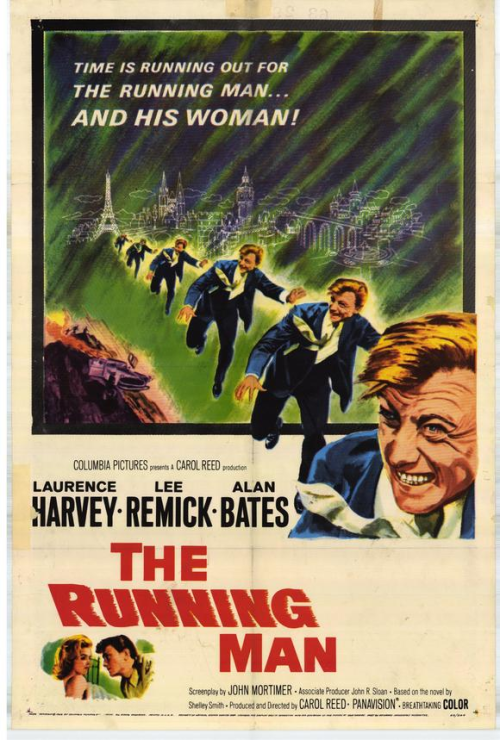 Rex (Laurence Harvey) is a victim of a plane crash when the airplane he is piloting crashes in a forest. He survives with minor injuries, but the plane is totaled and he expects a big payout from his insurance company. However, since he was two days late with his premium payment the policy was canceled and he gets nothing. Outraged he plans a scheme to get revenge with the help of his wife Stella (Lee Remick). He purchases a glider plane and has it insured with the same company. He then intentionally crashes it into the water and before help arrives he dives into the lake and by using an underwater apparatus swims ashore undetected. He hides out on a small island during the investigation and when it is finally confirmed that he was ‘lost-at-sea’ and the insurance pays a handsome sum to Stella the two then run off to Spain, but insurance investigator Stephan (Alan Bates) still has his suspicions and follows the two while continuing to hound them with questions forcing them into a shrewd game of cat-and-mouse.

Based on the novel by Shelley Smith this is a thriller in the most classic sense. The plot is completely believable and still very timely without any of the annoying loopholes. The action particularly during the final 30 minutes, which had me literally on the edge of my seat, is very exciting. The twists are interesting and unpredictable.

What I enjoyed most though was the way the characters evolve and change as the story progresses. Stella initially comes off as carefree and callous only to end up being beleaguered, worn out, and even feeling a bit guilty. Rex seems slick and conniving at the start, but eventually turns crass, vindictive and wholly unlikable. Stephan is nosy and intrusive when it begins, but before it is over he is the most sympathetic to the viewer. Having worked in the insurance industry now for 15 years I liked how the film shows things from both side not only the rigid business-like end, but also how those that try to cheat the system even when they feel somehow ‘justified’ in doing it only ends up making it worse for everybody else. The very ironic ending hits the bullseye.

Director Carol Reed is in top form. I liked how he captures the many different exotic locales of Spain not only with the outdoor scenery and villas, but also inside an old church cathedral as well as an empty bullfighting arena. The opening credit sequence showing Harvey’s shadowing figure running in front of a colored background is good as his the variety of camera angles used particularly during Rex’s final attempt to escape by airplane. The only part that I thought was unnecessary was in when Rex finds a passport left by an Australian that he was talking to inside a bar. Rex picks it up and it is clear to the viewer that he was thinking of using it for his own change of identity, but Reed still felt the need to superimpose Rex’s head shot over the Australian’s, which seemed heavy-handed as does the booming music that is played when Stephan meets Stella for the second time while in Spain.

Remick is excellent and the stresses and strains that her character conveys are easily felt by the viewer. Harvey seems to be having a grand old time particularly when he is in the disguise of the Australian. Although there is some debate over it at IMDB I actually felt that his Aussie accent was alright. He does however look much too scrawny in his bathing suit although Remick in her bikini is delectable.

Why this exciting and polished thriller has never been released onto DVD, or Blu-ray let alone VHS is a complete mystery especially when it stars two major actors from 60’s British cinema and directed by a legend. This movie is waiting to be discovered by new fans and can be enjoyed by just about everyone.

Not Available at this time.