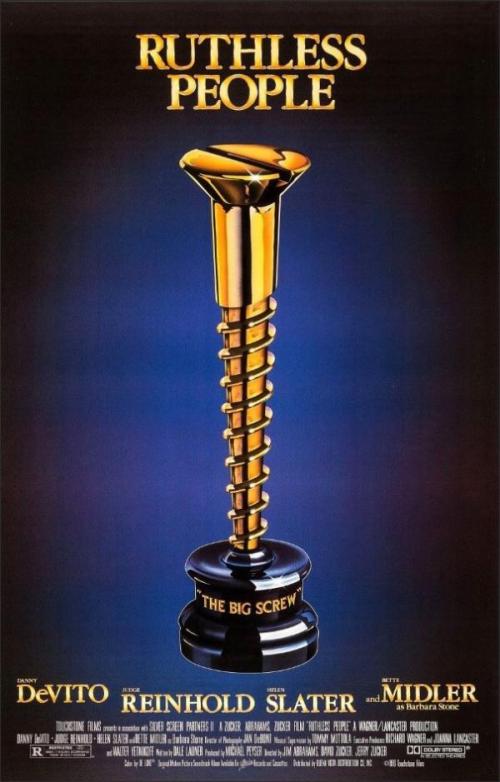 4-Word Review: His wife gets kidnapped.

Sam (Danny DeVito) wants to kill his shrewish wife Barbara (Bette Midler) so he can get her inheritance, but is unable to when she is kidnapped by a young couple (Judge Reinhold, Helen Slater) who demand ransom. Sam decides not to pay it, but mistakenly tells his lover (Anita Morris) about his plans and she with the help of her secret boyfriend Earl (Bill Pullman) scheme to use this information to extort him, but then a neighborhood psycho known as The Bedroom Killer (J.E. Freeman) throws everything into chaos by threatening to kill all of them.

The script was written by Dale Launer who at the time was a struggling salesman at a sound appliance store much like Judge Reinhold’s character in the movie, but like with many scripts written by first-timers there’s too many characters and a plot-heavy scenario that throws in one irony after another until it gets convoluted. Too much emphasis is placed on the concept and not enough on the characters with an end result that has no point to it other than just being very crass and over-the-top.

Everyone onscreen is simply a flimsy caricature used to propel the elaborate plot along and nothing more. The only one that is likable is Helen Slater whose nervous wide-eyed gaze makes her presence memorable. The film though would’ve worked better had it focused solely on the contrasting couples as well as having Reinhold and Slater shown working together more instead of Reinhold taking over and pushing Slater off to the side until she becomes almost forgotten.

DeVito is enjoyable, but Midler is annoying especially with her exaggerated facial expressions.  I also didn’t buy into the idea that this woman who is otherwise quite cynical and sarcastic would be naïve enough to believe that her husband still loved her and supposedly ‘worshipped the ground’ that she walked on even when he really didn’t. After living with somebody for 15 years, which is how long their marriage apparently was, you get a pretty clear view of your partner’s flaws no matter how hard they try to camouflage it. Even the most wide-eyed of people would’ve been at the very least suspicious that he might have ulterior motives as there’s always red flags and the fact that this lady was completely oblivious to them only proves how poorly fleshed-out the characters here are.

The story is overloaded with loopholes too. For instance Anita Morris and her lover Bill Pullman decide to play the tape of what they think is Sam murdering his wife on a VCR inside a TV-equipment store where all the other customers can see it, but why play something publicly that could potentially get them into a lot of trouble? If Pullman was able to afford a video camera, as he was the one who recorded the incident to begin with, then why couldn’t he also afford his own VCR?

It also takes too long for the police to suspect that Sam may have something to do with his wife’s disappearance even though in reality the spouse is always the prime suspect from the get-go. Having 8 police cars openly tailing Reinhold in hopes that he will lead them to his hideout is pretty stupid too. The idea is to not allow the suspect to be aware that you’re following him because otherwise he will just lead the police on a wild-goose-chase, which is exactly what he does here and any savvy veteran cop would’ve predicted that. I realize the filmmakers thought it would be ‘funny’ visually seeing all these police cars chasing the suspect, but it’s instead nonsensical. Every movie needs to have at least one person who is grounded and sensible even if everyone else is kooky. Having everyone behaving foolishly makes the story inane and unbelievable.

Reinhold’s ability to escape from his submerged vehicle after he drives it into a lake is equally questionable. Putting on a breathing apparatus underwater as he apparently does would be quite difficult if not impossible and how exactly was he able to make it seem like it was the Bedroom Killer (who was killed earlier in the film) as the driver of the getaway vehicle instead of himself? For that to happen the killer would’ve had to have been sitting in the driver’s seat where Reinhold was previously. Are we to believe that Reinhold had the dead killer’s body in the trunk of his car and while underwater somehow able to get the corpse from the trunk into the driver’s seat before the police got to it? The logistics of this is dubious, which is why having a scene done underwater showing him going through all of this should’ve been inserted in, but unfortunately isn’t.

Overall despite a few chuckles it’s a superficial mess and nowhere near the acerbic, dark satire that it likes to think it is. I disliked the gaudy Memphis style furniture used in DeVito’s home as well, which gives the production too much of a campy look.  Billy Joel’s ‘Modern Woman’, which gets played over the closing credits, seems to have nothing to do with the main theme and completely out of place. I also couldn’t stand the dresses that Helen Slater’s character designs. The movie acts like she has ‘talent’ and Midler really likes wearing them even though it looks like something you’d put on a clown and nothing I’d ever want to be seen in and I’d feel sorry for anyone who did wear them. 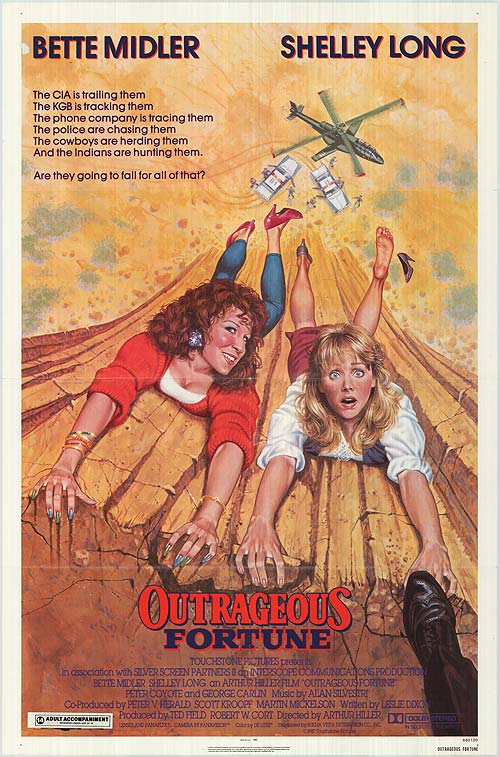 Lauren (Shelley Long) and Sandy (Bette Midler) join an acting class and find themselves at immediate odds. Little does Sandy know that Michael (Peter Coyote) the new attractive man that she has just met is also seeing Sandy on-the-side. When Michael disappears they reluctantly work together to try and find him only to realize that he may have been using both of them for nefarious and potentially dangerous means.

This is mindless, fluffy entertainment for sure and it doesn’t mind selling itself as such, but despite a runtime that goes on too long and a plot that becomes increasingly more farfetched it still works mainly because it’s genuinely funny. In fact there are several moments where I found myself chuckling out loud with the best part in my opinion coming near the beginning when Lauren begs her parents to borrow money so that she can attend an acting class.

The two leads help a lot. I always felt that Long should’ve stayed on ‘Cheers’ and her film career was for the most part a dud, but this is one of her better movie roles that takes full advantage of her prissy persona. Midler is terrific too and I admired how she really got into her part by insisting on doing her own stunts and she even has an impromptu moment where she decided to lie down on the road, which was not in the script, while a truck came dangerously close to running her over.

Coyote is good as the duplicitous boyfriend and it was interesting seeing him in a bad guy role, which he doesn’t do often, but this was yet another movie instance where we have a character that walks with a noticeable limp one minute only to have it strangely go away the next. On the flip-side Robert Prosky’s Russian professor caricature is overdone and George Carlin may be a legendary comedian, but his acting parts are never very funny.

For amiable entertainment it’s fun as long as you’re not too demanding, but there was one part that I thought was just too implausible. It comes during a chase sequence where in effort to elude the people who are after them Lauren and Sandy decide to hide themselves in two separate clothes dryers while the machines remain running. For one thing it is impossible to close the doors from the inside as they are intentionally made this way so little children can’t accidently lock themselves in. A person from the outside would have to shut the door in order for it to latch, so even if one did this for the other there is no way that they both could’ve done it. Also once the door is closed you would need someone from the outside to open it back up in order to get out and the prospect of a grown adult body being put into a dryer while it is running would most likely disable it, which makes the scene unable to meet even the minimum requiements of logic and therefore should’ve been left out. 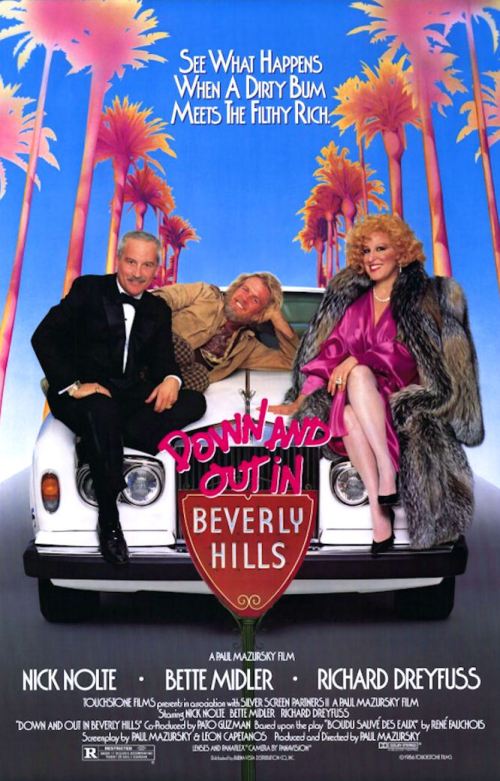 Jerry (Nick Nolte) has been living on the streets for years to the point that he has become used to it. One day his dog that is starving runs away from him and befriends a lady on the sidewalk who gives him food and eventually takes him home with her. When Jerry realizes that his pet is gone he panics and goes throughout Beverly Hills on a mad search. When he can’t find him he decides to drown himself in a pool of a posh household. Dave (Richard Dreyfuss) is the owner of the home who saves Jerry before he can kill himself and the two begin an awkward friendship. Jerry is even invited to move in with the rest of Dave’s family, which quickly sends the household out-of-control.

This film is a remake of the 1934 French classic Boudu Saved from Drowning and director Paul Mazursky nicely weaves the theme of the rich befriending the poor into the tapestry of Reagan’s ‘80s capitalism. The pace is breezy and non-confrontational and shows the wealthy as actually being the weaker of the two as they are much less able to adjust to harsh elements while trapped in their sterile surroundings and boring livelihoods simply so they can keep up the challenging pace of staying in tandem to the standards of society’s upper crust.

Midler has some funny moments as the snotty wife who doesn’t at all enjoy Jerry’s presence until he is able to give her a type of orgasm that she never had. Nolte is excellent as the bum in one of his best all-around performances. The scene where he eats dog food straight out of the bowl alongside the family’s pet Matisse (Mike the Dog) is an absolute keeper.

There are also some great supporting performances including ‘50’s rock icon Little Richard who plays Dave’s rich African American neighbor and is just as wealthy as the rest of the people in the neighborhood, but still feels badly discriminated against and doesn’t mind letting anyone he meets know about it. I also enjoyed that Mazursky stays with his ongoing theme of employing his own real-life therapist (Donald F. Muhich) into many of his movies. Muhich had already appeared as a psychiatrist in three of Mazursky’s earlier efforts and here appears again as a mental health counselor, but this time for the family’s dog.

The film gets a bit too serene and seems to blithely ignore many of the more serious elements of homelessness. Many scenes make it seem almost like they want to be on the streets and even enjoy it. It also would’ve been funnier had Dave been more a rich snob and his personality contrasted more severely with Jerry’s only for him to eventually come down to his level at the end, but overall I still found the whole thing to be amiably entertaining.

Posted in 80's Movies, Movies Based on Stageplays, Movies with Nudity, Remakes, Satire