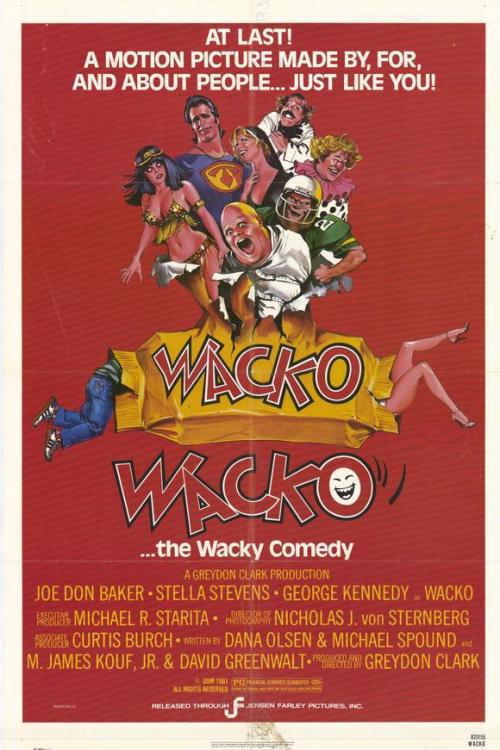 On Halloween night the infamous pumpkin head lawnmower killer murders Mary’s (Julia Duffy) older sister. Now, 13 years later, the killer has returned and this time he has his sights set on Mary, but who could he be? Is it her surgeon father (George Kennedy) who tries any chance he can to catch his own daughter disrobing, or maybe it’s her boyfriend Norman (Scott McGinnis) who makes lawnmower sounds every time he is aroused. Either way dogged detective Dick Harbinger (Joe Don Baker) is hot on the trail determined to end the mystery that has been haunting him and the town ever since it began.

This is one of several horror spoofs that came out around the same time and although it is far from excellent it still manages to rise above the rest. The main reason is Baker who’s overacting and mugging is perfect for the part. Just watching him roll out of bed and get ready for the day is a hoot. His funniest moments though are during the flashback sequence where he is seen wearing a dress while being tied up during bondage. The part where he arrives at Mary’s parent’s house to give them the sad news of their daughter’s death while dressed as a clown and then afterwards in an attempt to ‘lift their spirits’ makes a balloon dog for them is absolutely hilarious.

Stella Stevens, sporting a brunette wig and playing Mary’s mother has some amusing moments as well particularly when she recreates an obscene phone call for her daughter as well as when she and Kennedy sniff some laughing gas. Andrew Clay, who’s billed here without the ‘Dice’ is engaging in his film debut as a Fonzie-type high school student and his conversation at the dinner table of his girlfriend’s parents is good.

The segment involving a parody of Psycho with Norman Bates’ skeletal mother being used as a ventriloquist dummy was goofy enough to elicit a few chuckles, but overall there are more misses than hits. The production values are sloppy and the film, particularly during a car chase segment, veers too much into the cartoonish and nonsensical. They could’ve also had a more original soundtrack than simply playing or having a character hum the Alfred Hitchcock TV-show theme, which isn’t all that clever.

Some of the most successful horror parodies like Scream and Shaun of the Dead are ones that manage to have an interesting story of their own as well as a nice amount of gore and scares, but here there is no special effects or horror to speak of and the limp plot makes this whole thing seem more like one long, unending gag reel than a movie.

Stacy (Lea Thompson) and Melissa (Victoria Jackson) are lifelong friends with very different sexual pasts. Stacy has slept with a lot of guys including some one-night-stands while Melissa has had sex with only a few and never achieved an orgasm at least ‘not when someone else was in the room’.  Because of the AIDS epidemic they decide to reanalyze their sexual mores and join a singles resort where they hope to meet their Mr. Right and settle down.

The film is based on the stage play that was originally produced for The Groundlings Theater in Los Angeles. You can tell this right away at the start where the two women stand on an empty stage and talk about some of their past sexual encounters. This proves to be the funniest part of the film with a lot of keen observations on human behavior. Unfortunately after the first five minutes of this the film digresses into a more conventional narrative by having the girls go to a single’s resort and the attempts at satire get either over-played or not played up enough. What is even worse is that it throws in a romance angle by having Stacy fall for an irritatingly perfect looking heartthrob named Nick (Stephen Shellen) who is an aspiring rock star. The two quickly move in together and then all of sudden he becomes completely clueless and harbors a lot of annoying habits that leads to a drawn-out, boring break-up session.

There are still a few funny moments including an amusing dream sequence where Stacy imagines making love to Nick while her boyfriends from the past start to pop up all around her, but overall the film fails to gain any traction, is filled with clumsy characterizations and falls flat. A much better approach would have been to structure it around a collection of vignettes with a sexual theme much like Woody Allen’s Everything You Always Wanted to Know about Sex, but Were Afraid to Ask, which is far more original and funnier than anything you will see here.

Lea is really cute and gives a good performance. Normally ditzy blondes get on my nerves, but somehow I have always found Victoria’s cute-as-a-button face and squeaky voice appealing. Her acting skills aren’t up to Lea’s level, but her more natural delivery makes for a nice contrast. Skin hounds will be happy to know that both women appear nude from the backside.

However, it’s Andrew ‘Dice’ Clay who steals the film with an engaging performance as the proverbial lounge lizard. Every scene he is in is funny and he tells a lot of lame jokes, but the way he says them is hilarious ‘they can’t all be golden’. In his attempt to get more connected to women he reads a book entitled ‘How to Pretend Your Sensitive’, which is amusing as well. My only complaint is that in the end Lea marries him and he becomes more ‘normal’, which takes away from the goofy caricature.