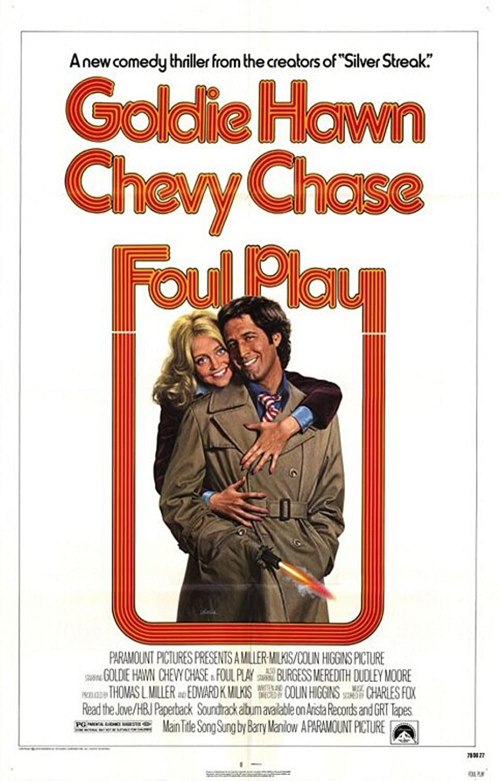 4-Word Review: Beware of the dwarf.

Gloria (Goldie Hawn) is a recent divorcee who takes a car trip along the San Francisco coast where she comes upon a stranded motorist (Bruce Solomon). Since she is looking to meet new people she decides to give him a ride. The man says his name is Scotty and that he’s looking to give up smoking and gives her his pack of cigarettes in an effort to stay away from them. Unbeknownst to Gloria the pack holds a microfilm that a secret organization is after. That evening the two meet-up at a theater to watch a movie, but Scotty, who has already been stabbed, dies while sitting in his seat. Gloria runs to notify the theater manager (Chuck McCann), but when they return the body is gone. Later that night Gloria gets attacked in her apartment by a man (Don Calfa) with a facial scare. She stabs him with her knitting needles and he falls over dead, at least she thinks so, before she herself passes-out. When the she comes to two policemen are in her place, but with no evidence of a body. One of the officers (Brian Dennehy) thinks she may be nutty, but the other one (Chevy Chase) finds her attractive and therefore makes an effort to research her story and while Gloria and he work together to investigate the case they begin a romantic relationship.

While Leonard Maltin, in his review, or whoever wrote if for him, describes this film as ‘Hitchcock plagiarism’ I found it similar to High Anxiety that came out a year before, and more of a homage. Many other films that try to replicate Hitch’s style usually fail because they go overboard with the theatrics, or too much parody, but this one has a nice balance that is both intriguing and funny.  Another great quality of the film is the way it lovingly photographs the city and landscape of Frisco Bay from its beautiful shore line, to row houses, to the scenic boat houses where the Chase character resides. It’s almost enough to compel one to move there if only a person who wasn’t super rich could afford to live there.

The supporting cast is delightful and everyone of them has some really laugh-out-loud moments. Dudley Moore is the best, in a part written specifically for Tim Conway who shockingly turned it down, as a sex starved bachelor who brings Gloria to his pad filled with blow-up sex dolls thinking the two will have sex only to learn that’s the last thing on her mind. Marilyn Sokol as Gloria’s fiercely feminist friend is quite amusing as is dwarf actor Billy Barty as a bible salesmen who Gloria mistakes as being the killer. Burgess Meredith, as Gloria’s kindly old landlord, doesn’t come-off as well and gets upstaged by his pet python. It also would’ve been good had his character brought-up his judo skills earlier in the story instead of having it introduced later on when they must confront the bad guys, which was just a little too convenient though the karate match that he has with Rachel Roberts is quite entertaining and something I wished had gone on longer.

I did though have some issues withe the two leads. Goldie is as enjoyable as ever, but her character makes what I felt were grossly misguided decisions. One is picking-up a stranded male stranger on an isolated road, which from a simple common sense perspective is a major no-no. She also later-on blithely walks into her apartment even after she becomes aware that the front door has been broken into. In another scene she’s given mace and a pair of brass knuckles from her friend Stella to use for protection and Gloria is able to escape from a locked room and knock-out the bad guy with the help of these items, but then she throws them away before running out, but any logical person would hold onto them in-case they were needed again.

Chase playing a police detective was something that I just couldn’t buy into. He initially comes-off, when Gloria first meets him at a party, as a lecherous lounge lizard looking to hit on hot babes and not serious about much else. He’s also seen as being highly klutzy, so having this clownish womanizer suddenly turn into a dedicated cop doesn’t jive and seemed more like two completely different people. Brian Dennehy gives a far more realistic portrayal of a policeman and is actually funnier in his exasperated responses to Gloria’s crazy story, so he should’ve been the sole investigator and Chase could’ve been this ordinary doofus that she meets and because he has the hots for her he agrees to ‘humor her’ and help her out on the case. The story and romance could’ve remained the same, but casting Chase as a regular Joe, which he’s far better playing at, would’ve made better sense.

The story does become strained at the end with a speeding car sequence that’s more nerve-wracking than fun, though the elderly Asian couple that can speak no English and sit in the back seat of the speeding limo are amusing. The whole reason behind the crime and attempted assassination of the Pope is hooky and it would’ve been better had no explanation been given at all than explaining it away the way they do. However, the climactic sequence done during a performance of ‘The Mikado’ at the San Francisco Opera House, is terrific and a nice finish to what is otherwise perfect escapism.