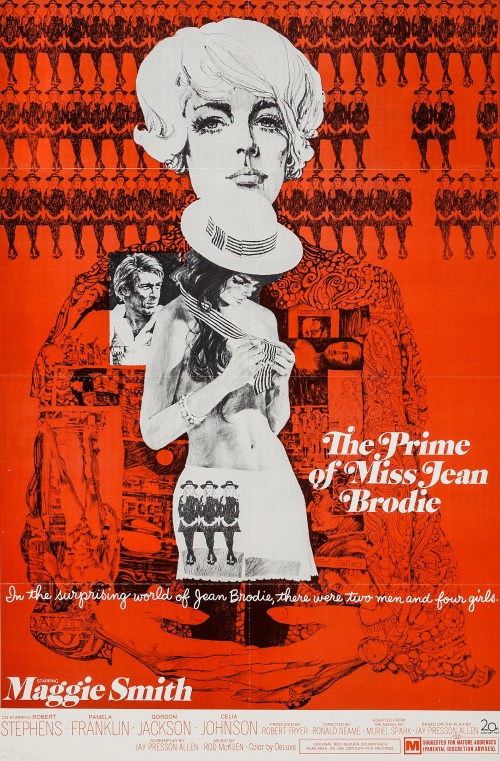 Jean Brodie (Maggie Smith) is a teacher at an all-girls school in Edinburgh, Scotland in 1932.  She routinely strays from the core curriculum and instead instills her own quirky value system, like her admiration for fascist dictators, onto her students. She views them as empty vessels there to be programmed to her liking as she routinely will say: “give me a girl at an impressionable age and she’s mine for life”. The school’s Headmistress, Miss Mackay (Celia Johnson) is aware of Brodie’s unorthodox teaching methods, but unable to do much about it, despite the repeated warnings that she gives to her, due to the fact that Brodie has tenure and been at the school longer than she. Sandy (Pamela Franklin) is one of Brodie’s students, who used to admire her teacher, but now has turned on her and comes up with a way to have her fired, which leads to a dramatic confrontation between the two.

One of the first things that struck me about the story, which is based on the play of the same name by Jay Presson Allen that was based on the novel by Muriel Spark that some feel was inspired by a teacher named Christina Kay who taught at James Gillispies School that Muriel went to as a child, is that it works against the grain of most films. In our individualistic culture the modern day movie centers around the rebel, or those that choose to work outside the system of an autocratic institution and the people that uphold those rules and enforce them are usually the villains. Here though it’s the stuffy authoritarians that ultimately become the makeshift heroes while the non-conformist gets exposed as a ‘loon’ that got too far off-base and needed a serious reeling-in.

It’s also the perfect study of someone who seeks control over others and cannot function in relationships were both sides are on equal footing. We see this not only with the way Jean openly humiliates her students by ridiculing them for even minor infractions like having their shirt sleeves rolled-up, but also in her maladjusted love life. Since she cannot have a healthy relationship with them as that would require selfless behavior from her, which she can’t give, so instead she emotionally manipulates two men (Robert Stephens, Gordon Jackson). She enjoys the attention they give her and gives them just enough incentive to keep on doing it, but never more than that. When the Jacskon character finally does get married to someone else, her sad expression isn’t about losing a person she loved, but more upset that she could no longer have this simp at her convenient disposal.

The recreation of the 1930’s girl school atmosphere was impeccable. Too many times I feel movies dealing with a bygone era don’t recreate it in an accurate way, or it gets viewed through a warped modern lens, but here I came away convinced it was accurate and this in large part could be credited to director Ronald Neame, who was alive when the story took place and therefore better able to feed-off his memory and experience. The scene where the girls all get up out of their seats and stand at attention the second the headmistress walks into the room is one of my favorite moments. To some degree it would be nice if kids today could show that kind of respect to an adult figure, but on the other hand it also reveals the dark side to extreme obedience to authority, which creates an atmosphere that allows someone like Jean to incorporate her will and beliefs onto the students without them ever questioning it.

In the end this is a terrific portrait of how teacher’s where viewed back in the day and the tremendous amount of influence they could hold over their pupils. There were no teen idols, singers, celebrities, or social media influencers back then, so the teacher was the center of most children’s lives sometimes even more so than their parents. While some things have changed the debate about what a teacher chooses to convey in the classroom and how far they should be allowed to stray from the core curriculum rages on today. No matter what side of that issue you may stand it just proves that this story is even more relevant now as it was back then.