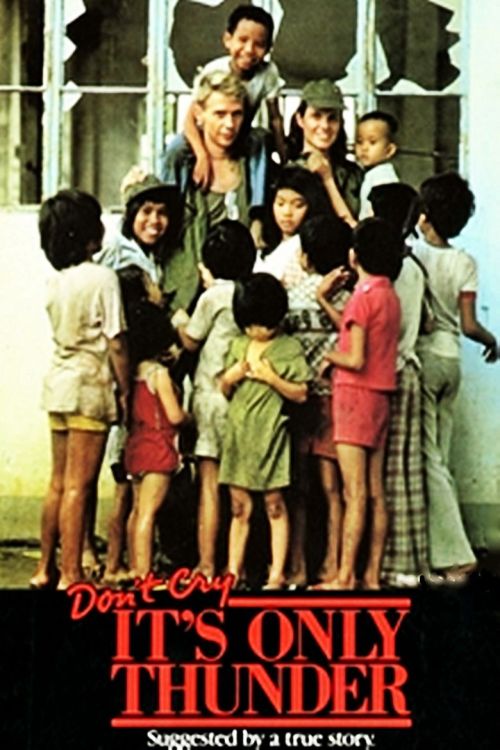 Brian (Dennis Christopher) is an army medic during the Vietnam War who’s stationed at a hospital in Saigon. Young and idealistic he initially cannot handle the death and carnage that he comes into at the clinic and feels he’s not making much of a difference especially as he sees the severely injured soldiers come-in and die with very little that they can do. He then makes a promise to one of them to look in on an orphanage and try to find a safe new location for the children and two nuns who look after them. At first Brian is not into the kids, but eventually he bonds with them especially Anh (Mai Thi Lien) a 12-year-old girl who cannot speak and who he wishes to adopt despite all the red tape that he must go through.

The film is loosely based on the actual experiences of Paul G. Hensler, who first wrote it into a novel before being commissioned to turn it into a screenplay. His motive was to show more of the humanitarian side to the war versus the battle scenes that made up so much of the other films that dealt with the Vietnam conflict. In a lot of ways it’s a refreshing change of pace and unlike with M*A*S*H, that focused on medics during the Korean War, there’s no humor, or pranks, but instead solely focuses on the serious side of taking care of the wounded and how emotionally exhausting it can become. There’s a few moments where a passing character will make a joke, I suppose as an ode to M*A*S*H, but instead of laughs from the others it’s met with eye rolls, which is how it should be as there’s certain situations where humor just isn’t going to help things and in some ways such as here just plain out-of-place.

Christopher, who’d been acting in films since he was 15, but rose to critical acclaim in Breaking Away only to make a bad career turn by starring-in the offbeat dud Fade to Black, redeems himself with his performance here. He does though look incredibly young almost like he’s only 14, but his youthful appearance helps explain his character’s sometimes naive nature and tendency to be overly idealistic and thus makes some of the things that he does, which an older more seasoned person might refrain from, more understandable.

I wasn’t as keen with Susan Saint James. She was 10 years older than Dennis, but looked more like it could’ve been 20 and thus making the eventual love scene between them come-off as forced and mechanical. I’ll give her credit she does have an effective emotional moment, but her character is too Jekyll and Hyde-like as she initially is really into helping the orphanage and even gets Brian more into it and then suddenly like a light switch doesn’t want to have anything to do with it, only to eventually to go back, kind of, to helping the kids out, which is like watching someone with a ping pong personality. If anything I really enjoyed the two Vietnamese nuns (Lisa Lu, Shere Thu Thuy) and the way they would sometimes compromise their moral beliefs for the sake of the kids.

The film manages to be gritty most of the way and despite being filmed in the Philippines still gives one an adequate feeling of the civilian experience in Vietnam during that time. However, the segment where a song gets played that was supposedly sung by the kids while we view a montage of them playing is over-the-top sentimental and even jarring as we were used to the background noise of battle and thus comes-off as sappy and out-of-place. Watching the kids having a bit of fun is fine, but we didn’t need the added music.

Brian’s insistence and almost obsession at adopting a preteen girl will be considered cringey by today’s standards. The film makes clear that his intentions are pure, I suppose this is why there was the sex scene thrown between he and Susan to alleviate any viewer concern that he wasn’t a red-blooded All-American guy who was into chicks his own age, but it still looks even in the most charitable way as kind of questionable especially since he can’t even have any conversations with her since she doesn’t speak. He contends that he’s the one guy who can help her, but how since he has shown no background in dealing with those with speech issues? The book cover of which the film is based has a picture of the real Hensler, of which Brian is supposed to represent, holding an infant girl, which I presume is who he wanted to adopt. Having the girl character being a baby like in the book instead of 12 going on 13 would’ve worked better, or having him try to adopt a group of kids to bring home with him, like 3 or 4 that was an even mix of boys and girls, but to have him get overly infatuated with just one makes it unintentionally seem likes his grooming her to being a Lolita in the making. A bratty child (Truong Minh Hai) even alludes to this at one point, which makes you wonder; did he know something the rest of us didn’t?

Overall, despite tanking at the box office, it’s an decent drama though its never been released on DVD and trying to find a print of it is difficult.  It also goes on about 15-minutes too long and loses some of its potency by the end. A perfect example of this is when the orphanage gets unexpectedly bombed without warning, which is genuinely horrific, but when another unexpected bomb goes off later the shock effect is no longer there and thus they should’ve kept it down to just one.