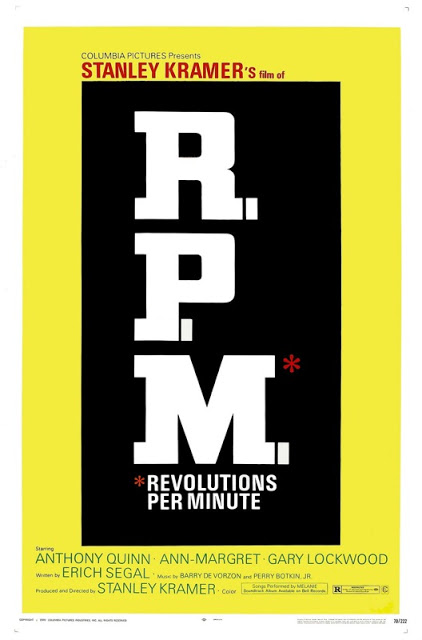 4-Word Review: Caught in the middle.

Paco Perez (Anthony Quinn) is a college professor given the position of acting university president after a group of students overtake an administration building, which forces the other president out. Paco now has the duty of negotiating with these students in order to meet their requests and have them leave the building, but their list of 12 demands are extreme and Paco cannot agree to all of them. Eventually he accepts 9 of the conditions, but Rossiter (Gary Lockwood) the head of the student movement refuses to budge unless all 12 are met, which continues the standoff until Paco feels he has no other choice but to have the police called in and the students forcibly removed.

For a film with the title of Revolutions Per Minute this is woefully lacking in action. There had already been other films dealing with the campus unrest of the day including The Strawberry Statement and Getting Straight and while neither one of those were perfect they at least had violent confrontations between the protesters and authorities, but this thing is mainly all talk. These students are also the most uninteresting ‘radicals’ that I’ve ever seen and spend most of their time just looking out the window. I would think at their age they’d be partying, doing drugs, drinking, listening to rock music, sex, and maybe even some infighting amongst themselves in between meeting with Paco, but instead it has the atmosphere of a retirement community.

Writer Erich Segal and director Stanley Kramer, who later admitted this was the least favorite of his films and the first to do poorly at the box office, were too old and out-of-touch with the young generation to effectively tackle the subject in any meaningful way. The kids are bland and the scenes with them stagnate. All of the emphasis is put on Quinn and while some of the issues that it brings out, which mainly consist at how the older generation sees things and approaches things differently, is not enough to keep it compelling despite the arguments that he has with his much younger live-in girlfriend, played by Ann-Margret, which are the only times when the movie gets quasi-lively, but even then it’s not enough to save it.

The biggest disappointment is when the police finally do invade the building. I was hoping for a big battle to make up for all the boredom that came before, but Kramer fails to deliver. He unwisely uses music during these clashes, which should not be necessary as the yelling, screaming, and other noises from the chaos would be more than enough to keep it riveting, much like in Medium Cool. He also blurs out the images, so we just see these fuzzy little dots on the screen, which I guess was his idea of being ‘artsy’, but it doesn’t allow for any emotional impact. Ultimately it becomes just another run-of-the-mill flick looking to cash-in on the screaming headlines of the day, but offers no new insight. Kramer was famous for making ‘relevant’ films that tackled difficult topics like Judgement at Nuremburg, The Defiant Ones, and Guess Who’s Coming to Dinner, and while those were a success this one was an overreach and he should’ve quit while he was ahead.