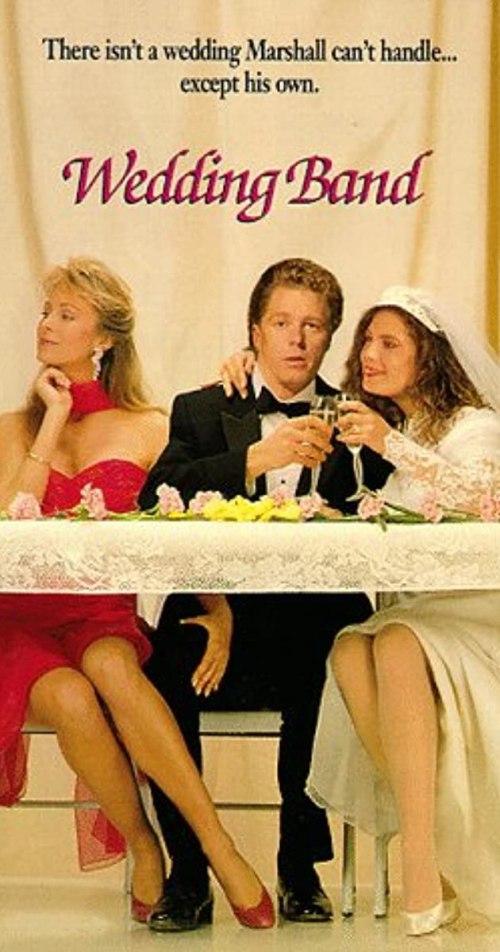 4-Word Review: He loves his job.

Marshall (William Katt) is the lead singer for a band that plays at weddings. Karla (Joyce Hyser) is a wedding planner, who has been dating Marshall for 5 years. The two finally get engaged, but now Karla wants Marshall to ‘become responsible’ by getting a ‘real job’, but Marshall loves his band so much that he doesn’t want to give it up even if it doesn’t pay that well.

Misfire comedy, written by Tino Insana who also plays the character of Hugh Bowmont, that tries hard to be a rom-com while also mixing in a playfully surreal element, but it doesn’t gel.  The problem lies with a storyline that is too basic and offers no insight or nuance. I worked as a DJ for weddings back in the 90’s and none of the experiences I or my friends went through gets examined here. In real-life there’s always concerns about getting paid, or tipped, or how much of a tip you’ll get. Or there’s the issues of dealing with a Bridezilla, or Groomzilla for that matter that insist everything must be perfect and if even one thing isn’t they refuse to pay, or demand a refund. Faulty equipment and obnoxious, drunk party guests are other headaches that just about every wedding DJ, singer, or photographer will have horror stories about and yet none of these things gets touched upon here. It’s almost like the filmmakers never worked as a wedding singer themselves, had no idea what it was really like, and just made up goofy scenarios that have no bearing in reality whatsoever.

The relationship angle comes off as quite sterile as the two don’t seem to have anything in common and you wonder what attracted them to each other in the first place. I couldn’t understand why Karla would be surprised that Marshall didn’t want to quit his job and do something that he didn’t enjoy. She was supposedly ‘really into him’, so she should’ve known about his passion for his job and if she got into a relationship with him that most likely the job would come with it. It’s clear to the viewer right away that he enjoys being a wedding singer, so after dating him for 5 years why is it not clear for her?

There are a few quirky moments like the segment dealing with a bug exterminator, but this has nothing to do with the main story and doesn’t even have either of the main characters in it. If they wanted to show part-time work that Marshall needed to do on the side to help supplement his income then great, but having a lot of drawn-out scenes dealing with what his bandmates do in their private time does not work because it’s the main characters that the viewer should be into not the minor supporting ones.

Some familiar faces who were not yet famous pop-up in bit parts. Some of these include Robert Wuhl as a waiter, David Rashe as a man who loves his DeLorean car above all else, Eddie Deezen as a would-be professional clown, and Pauly Shore as a a guy who does band rehearsals in his garage that annoy his neighbors. Cult film director Penelope Spheeris also appears as Shore’s defensive mother, but she delivers her lines in such a poor way that it’s clear she’s best behind the camera. My favorite actor out of all of them was Fran Drescher, who plays Karla’s friend and is so good, without having to try all that hard, that she should’ve played the main character as both Hyser and Katt are deadly dull, which is another reason why this already botched film doesn’t work.