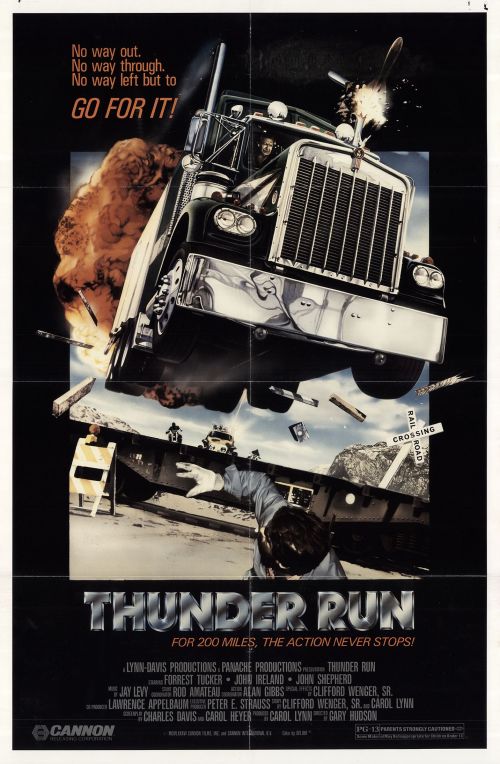 Charlie (Forrest Tucker) is a former trucker who spends his retirement working an old cobalt mine, but finds few prospects. He’s then given an offer by George (John Ireland) an old friend of his to haul some plutonium from Nevada to a top secret installation in Arizona. George warns Charlie that it could be dangerous as they’re terrorists after the cargo and willing to resort to violent means to steal it, but the $200,000 payout is too much for Charlie to refuse. With the help of his grandson Chris (John Shepherd) and his other teen friends the truck gets fitted with high tech gadgetry in order to fight off the bad guys when they attack.

The film starts out okay although it has all the signs of being a low budget direct-to-video 80’s venture complete with stock characters and generic music. The presence of Tucker, whose last movie this was, really helps. He’s the kind of actor who can give a performance that seems effortless and like he’s not acting at all just being himself and his persona is quite engaging allowing the viewer to become attached to him quite quickly and rooting him on in his challenge. There is some nifty stunt work too with my favorite moment being when a backhoe loader crushes a car that it literally runs right over and then also a trailer office. The scene has little to do with the main plot, but it’s still fun to see visually.

The film though starts to falter when it gets out onto the open-road. What should’ve been excited actually isn’t. There’s just too much high tech nonsense with rig equipped with stuff no other 18-wheeler has ever had. There’s very little intrigue at seeing the bad guys chase the truck when Tucker is able to just blow them all away with a press of a button. The truck seems almost indestructible as the villains aim a flame thrower right at the tires, which should’ve easily melted the rubber, but instead it doesn’t. The film is famous for a stunt that has the truck jumping over a train, but when it came back down onto the pavement it should’ve jostled the intricate parts of the rig in a way that would’ve most likely disabled it and the fact that the truck is able to continue on just fine starts to make the whole thing too ridiculous to be believed.

Having Tucker paired with Shepherd, who was 24 at the time, but looked more like he was only 18, is not interesting. Initially I thought this would allow the story to take advantage of the generation gap, but Shepherd is so squeaky clean and All-American that his presence allows for no nuance. I realize that in order to attract teen viewers a younger actor needed to be cast in a co-starring role, but the film would’ve been far better had Tucker been the sole driver, manning a rig that was just a regular truck without any of the techie jazz and forced to use his wits and cunning to fight off the terrorists instead of stuff dreamed up by a special effects wiz with an over active imagination.