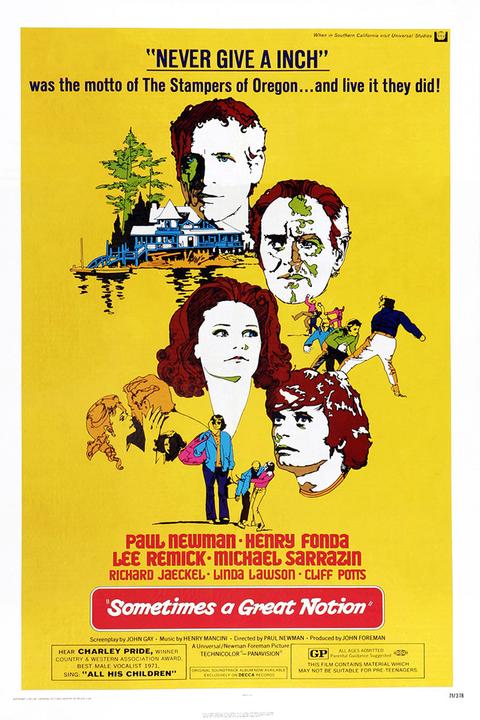 4-Word Review: Never give a inch.

The Stampers are a proud logging family who’ve run their business out of the small Oregon town of Wakonda for years, but now find that may be in jeopardy when the local union strikes against a large lumber conglomerate. The Stampers, headed by their stubborn, bull-headed father (Henry Fonda) refuse to go along with the other loggers and continue to run their business. The rest of the townspeople consider them to be traitors and get their revenge by burning their equipment and doing whatever they can to make their business fail, but despite all the obstacles and setbacks the Stampers prove to be a resilient bunch.

The story is based on the Ken Kesey novel and while the book spawned many accolades the movie pretty much fizzled and today is only remembered as being the first film ever shown on HBO when it began broadcasting on November 8, 1972. However, that doesn’t mean it doesn’t have its share of good points as I really did enjoy the vivid way it captures the logging business showing first-hand what it takes to cut down the large trees and move the timber. Everything is captured with an in-your-face style that makes you feel like you’re right there working alongside the others and all the stages of tree cutting are explored including the many potentially dangerous accidents that can occur within the blink-of-an-eye.

The film also features a few memorable scenes including a bird’s-eye view of a large barge of logs being tugged down the river, which is an impressive sight. There’s also the infamous drowning scene unique because I’m not quite sure how they were able to pull it off without the actor drowning.

The characters though are quite boring, don’t display any type of arc and instead convey a very one-dimensional cantankerous attitude all the way through, which isn’t fun. Lee Remick is the only one who shows a softer, more introspective side, but she’s not in it enough. The scene involving her in bed with Michael Sarrazin, who plays the younger brother to Paul Newman, could’ve given things a much needed spark and should not have been left on the cutting room floor.

Fonda though is an exception. I’m always amazed at how in his later years he had to take small roles in films that weren’t always A-list material, but would still steal the film away from the leading actors anyways and his answer as to why the family continues to work while clearly causing tension with the rest of the town is a gem.

The plot though gets presented in a sporadic way. So much attention gets put into the aesthetics that the story becomes largely forgotten and only trickles through at certain intervals. The perspective is a bit odd for a Hollywood film too especially for that time period where the idea was always a David vs. Goliath formula that would take it to the establishment and yet here instead of punching up it punches down. As a viewer I felt sympathy for the townspeople and their need to create a strong union to make life better for themselves, so watching this family arrogantly ignore their needs and forge on with their business seemed to be me selfish and not something that was noble or interesting.

The film’s final shot, which features Newman tying his dead father’s severed arm on top of his tugboat, with the hand of the arm giving the finger to the town’s people on shore, is quite ghoulish. There’s no explanation for how he obtained the arm, but I’d imagine it would’ve required him digging up his father’s grave and cutting the limb off, which is pretty sick and twisted and thus loses the humorous quality that was intended and becomes just plain repulsive instead.

Alternate Title: Never Give A Inch