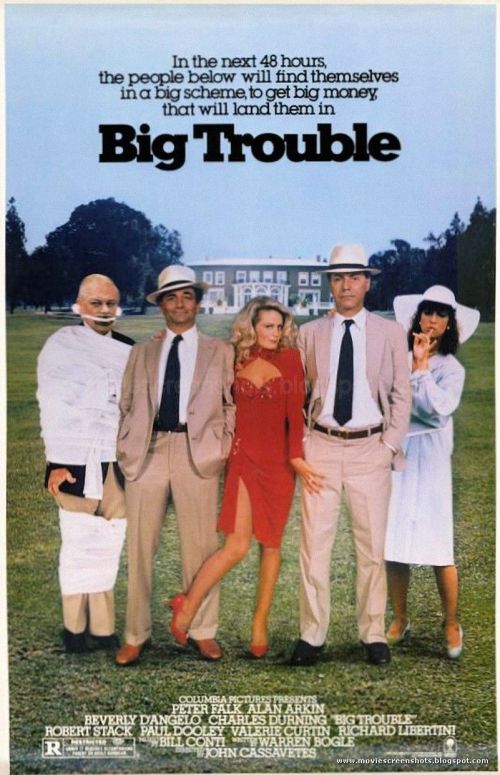 Leonard (Alan Arkin) is an insurance agent who does not have enough funds to put his three sons through Yale, which causes him a lot of stress. During a random sales call he meets Blanche (Beverly D’Angelo) who has a sick husband named Ricky (Peter Falk) who has only a week to leave. They hatch a scheme to write-up a life insurance policy that has a double indemnity clause that offers a big payout if Ricky dies by falling off a moving train. The plan starts out fine only to ultimately backfire when Leonard realizes he’s been double-crossed.

At the outset one might assume that this is a sequel to The In-Laws since it has the two stars from that film as well as the same screenwriter, though done under the pseudonym of Warren Bogle, but that’s not the case because Andrew Bergmen got the bright idea of trying to do a parody of Double Indemnity instead. This became a complete disaster for its studio Columbia Pictures because after the script was completed it was deemed a remake of the original film, which Universal Studios still held the rights to, forcing Columbia to give up the rights to Back to the Future and given to Universal as compensation who made a ton of money off of it while this film flopped badly.

A lot of the problem is that unlike in The In-Laws the two stars don’t play off of each other enough and in fact for most of the film they seem to be adversaries. The tone is also inconsistent seeming at times that it wants to be a parody/farce while at other moments it comes off more like a surreal comedy. It doesn’t help matters that John Cassavetes took over directing the production when Bergmen dropped out and his forte was more in drama with a cinema vertite approach causing many of the scenes here to go on longer than necessary while lacking a good comic pace. I also thought it was ridiculous that the plot features many twists, but then ends up telegraphing to the viewer well ahead of time that they’re coming, which takes away any surprise.

Arkin’s character is particularly problematic. Part of why he was so funny in The In-Laws is because he played this sane man thrown into an insane situation, but here he allows himself to get swept up into the nuttiness too easily until he seems almost as crazy as the rest. There’s also no way that a seasoned insurance agent, such as the one he played, would be dumb enough to think he could pull off such a poorly thought out scheme. Being an agent he would know that an autopsy would be done on the dead body and they would find that the victim had been strangled well before he fell off the train and the fact that this all occurs less than 24-hours after the policy was signed would send off massive red flags to anyone working in the industry.

While there are a few funny moments which includes Arkin trying to disguise himself as Falk and even speak in his voice as well as Arkin’s reaction when he takes a sip of Falk’s very exotic liqueur, the rest of it falls depressingly flat. The worst of it is the ending, which throws in a wild coincidence that has no bearing to the main plot nor any forewarning or connection to anything else that came before it, which helps to cement this as a big mistake that should’ve never have been given the green light.