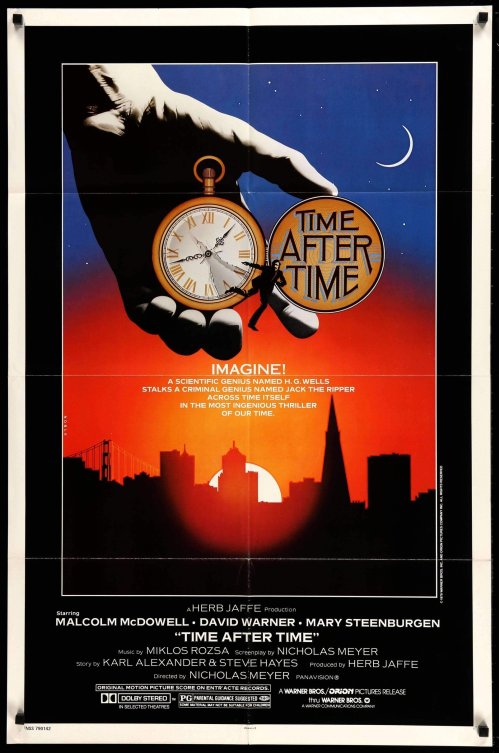 In 1893  writer H.G. Wells (Malcolm McDowell) constructs a time machine and introduces it to his skeptical guests at a dinner party that he is hosting unaware that Dr. Stevenson (David Warner) who is also attending the party is the notorious Jack the Ripper. When the police surround the home looking for Ripper he jumps into the time machine and escapes to the year 1979. Wells then quickly follows him to modern day San Francisco and tries chasing him down, but along the way he meets Amy Robbins (Mary Steenburgen) who he fall in love with.

Initially I enjoyed seeing Wells’ confusion at dealing with modern society and the technology and had the film stayed at this level the whole way it could’ve been quite entertaining, but Wells ends up adapting too quickly. I was willing to accept that he was just a smart guy who could figure things out by being very observant, but Jack ends being the same way. Jack even attends a discotheque wearing a John Travolta-like white leisure suit, until it seemed like he was always a part of the modern world, and the original time traveling spin gets unfortunately phased out.

The romantic relationship that forms between Wells and Mary comes off as forced. Having her ask him out on a date while she’s working at her job and after only talking to him for a few minutes seemed too forward and unprofessional. Does she do this to all of her customers and if so how can she hold down a job if she’s coming on to all the men that she meets and if not then why would she ask out Wells so quickly after having just met him? Having the two end up going to bed together makes Wells seem too contemporary and not like a person from the Victorian era from which he came where sexual relations outside of marriage were much more taboo.

The script is full of a lot of loose ends too. For example: Wells goes to a jeweler to trade in his jewels for US currency, but the jeweler won’t accept them unless Wells shows a valid driver’s license, which he doesn’t have. The next day he goes to a different jeweler who gives him the money without asking for the ID, but why? In between Wells goes to a church where he speaks out loud in an awkward prayer, so are we then to presume that the second jeweler gave Wells the money without requesting the ID because of divine intervention?

There’s also a moment when Jack runs out into the street and gets struck by a car and is sent away to a nearby hospital, but then returns later showing no visible bruises or scratches. There’s also no explanation for how he was able to fool the nursing staff into thinking he had died as when Wells goes to the hospital that’s the explanation he’s given.

The ending is equally screwy. It has Wells and Mary going a few days into the future only to read a newspaper article reporting Mary getting killed inside her apartment by Jack, so they return to the present and then back to the apartment where Mary then takes a nap, which seemed hard to believe knowing that Jack was coming to kill her there and she’d be too tense and nervous to ever relax enough to go to sleep. Why even go anywhere near the apartment anyways and instead just find a room at a nearby hotel? There isn’t much tension to her potential death either since all Wells would need to do is go back a few days in his time machine and she’d be as good as new.

The explanation that Mary never got killed, but instead it was really her friend, who she had invited over to dinner is problematic too because even though there wasn’t DNA testing at that time they could still identify the victim through their dental records.

The story, which was based on a 55-page treatment written by Karl Alexander, who later expanded it to a novel, which was released at the same time as the movie, has a lot of potentially interesting ideas, but it ends up taking on too much. A decision should’ve been made to focus on either the romance or Wells’s pursuit of Jack, but not both. Trying to cram two plot-lines together results in a script that’s too rushed and poorly thought out.