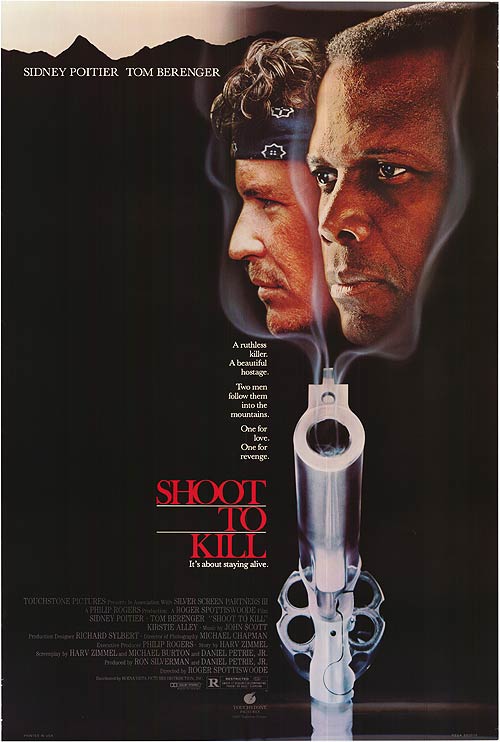 Warren Stantin (Sidney Poitier) is a veteran police officer who goes after a jewel thief when he kills his hostages while the two were negotiating for their release. Stantin feels like he failed them (the hostages) and must make restitution by personally seeing their killer brought to justice. The problem is that he doesn’t know who the killer is as he never saw his face. In an attempt to escape the authorities the killer then joins a group led by Sarah (Kristie Alley) who are hiking through the rugged forest terrain of northern Washington. Stantin joins forces with Jonathan (Tom Berenger)  an outdoorsmen who knows the area well and can lead Stantin on foot to where the hikers are as no one in that group realizes that one of them is a dangerous criminal.

The story is the inspiration of Harv Zimmel who wanted to incorporate his lifelong enthusiasm for hiking into a an exciting police story and for the most part it works. The story itself is kind of formulaic as cop thrillers go, but the vivid wilderness setting adds an extra element with a lot of hair-raising scenes including the point-of-view shots of Berenger dangling hundreds of feet in the air on a thin rope over a gulch and getting swung violently into the side of a rocky hill.

One of the coolest aspects of the film is the fact that the viewer, at least for the first half, has no idea who the killer is, which lends extra intrigue as you try to guess which one of the group members he is. In order to make it more interesting director Roger Spootiswoode cast actors who had played villains in past thrillers although I would’ve done the opposite by hiring actors who didn’t seem like killers at all and therefore making the ultimate reveal even more surprising and it’s a shame that the killer’s identity couldn’t have been kept a secret until the very end.

Poitier, who had spent the previous decade working behind-the-scenes as a director, is excellent in his first acting role in 11 years. He was 60 when he did this, but you’d never know it and he gets a few comical moments here too. It’s also nice that his skin color never comes into play as most of his other film roles always made his race a center issue. Berenger offers adequate support, but I was actually much more impressed with Alley who comes off as tougher and more resourceful than all of the other men.

There’s very little to complain about although one of my quibbles is that we never get to see Stantin’s personal life. Most cop films will always show a brief glimpse into a policeman’s home life in order to make him more ‘human’ or multi-dimensional. Here we see briefly Poitier talking on the phone with someone, supposedly his wife/girlfriend, but it would’ve been nice to have had a scene  showing the face of his significant other.

The film also has way too much music that lacks distinction and gets played over just about every scene. The story is exciting enough and there’s no need for a booming score to accentuate what we’re already caught up in. Since the majority of the pic takes place in the outdoors it’s best to allow the natural ambiance to work as the background sound and adding in anything above that comes off as heavy-handed.

Overall though the film is slick and exciting that starts strong and never lets up and includes a very unique final shootout that takes place underwater.