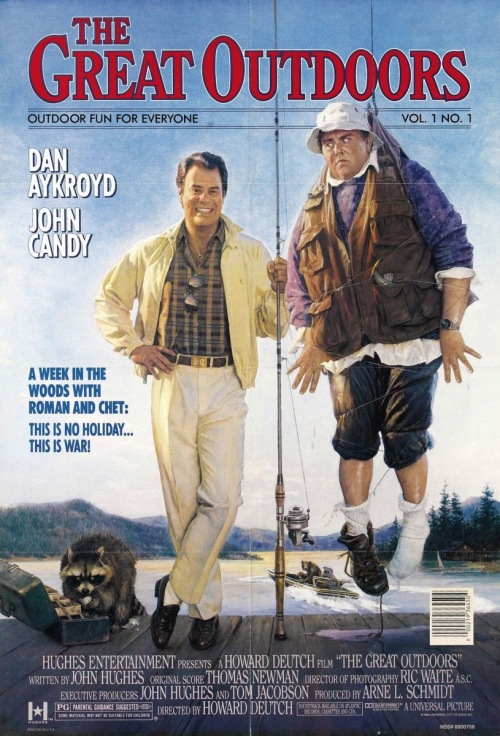 Chet (John Candy) decides to take his wife (Stephanie Faracy) and two kids (Chris Young, Ian Michael Giatti) on a well deserved family outing up to a lake resort town in Wisconsin. Unfortunately their fun excursion  gets crashed by their obnoxious friend Roman (Dan Aykroyd) and his wife Kate (Annette Bening) who along with their two creepy twin daughters (Hilary Gordon, Rebecca Gordon) proceed to turn the pleasant vacation into a nightmare.

Calling this John Hughes script paper thin is an understatement and it reminded me of an interview I once read where Hughes bragged that he could write his screenplays in a matter of only a day or two although with this one I’m surprised it took even that long. Not only is the premise devoid of any original ideas, but it seemed more like material for the Griswold family and I was confused why it wasn’t just made as part of the Vacation series although I preferred Candy over Chevy Chase as he’s much more likable without the sneering sarcasm, and his presence here helps make it at least modestly enjoyable.

The comedy also avoids becoming too farcical or lewd, which was nice, and manages to keep things semi-believable to what might occur to a regular family in the woods including my favorite part where the two men try to kill a bat that has gotten into the cabin. The setting, which was filmed on-location in Lake Bass, California is scenic and the woodsy cabin, built specifically for the film on a studio backlot, is impressive because you would never know the difference.

However, the animosity between the two characters, which is supposedly the heart of the humor, is not played-up enough or as half as much as I was expecting. In many ways it seemed almost like it was Candy who was more the obnoxious one particularly when he tells a scary story that gets everyone upset. The scene where he puts a candy bar on the hood of his car to attract a bear makes him look really stupid, and something that should’ve been done instead by the supposedly dopey second-banana character like Aykroyd.

The kids, especially the twin girls who seemed spookier than the twins in The Shining, are annoying and I thought it was weird that they are played-off as creepy for the majority of the film only to then near the end have the viewer expected to suddenly start caring for them when they get trapped in a cave.  As for the two boys they’re dull and transparent and the scenes dealing with the romance that the oldest one has with one of the teen waitresses (Lucy Deakins) are extremely formulaic and unnecessary and almost like it were put in simply to pad the runtime.

The running gag dealing with the talking raccoons is childish and the one dealing with a man (Britt Leach) constantly getting struck by lightning is completely ridiculous.  The story is nothing more than a procession of gags that lacks momentum or pace. The laughs are sporadic and subside after the 45-minute mark making the final half a chore to sit through and that includes the climactic bear attack, which is forced and over-the-top.