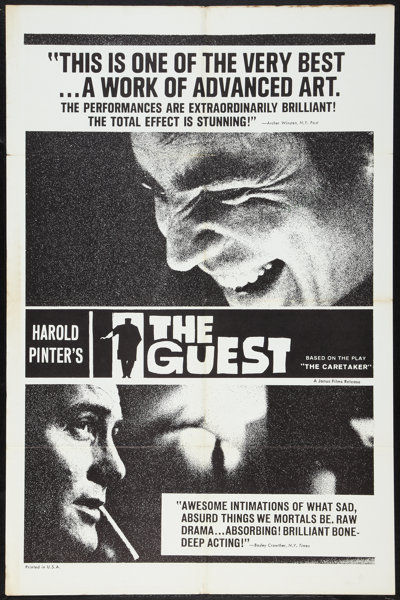 Based on the Harold Pinter play the story centers around Aston (Robert Shaw) who suffers from an undisclosed mental illness and lives alone in a cramped, cluttered room of an abandoned home that his brother Mick (Alan Bates) is trying to renovate. Mac Davies (Donald Pleasence) is a homeless man that Aston invites to stay with him, but Mac proves to be a difficult roommate and when Aston asks him to leave Mac refuses and instead tries connive with Mick to have Aston thrown out instead.

From a purely technical standpoint this is a brilliant film as Clive Donner’s direction perfectly captures the claustrophobic setting. It can be hard to recreate a truly cluttered interior, but this room really comes off looking like a storage closet with so many items crowded into it that you wonder how the performers were even able to move around or how the camera crew could fit in to film it. You eventually lose touch with this being a movie at all, but instead start to feel like you’re right in there with the characters as the camera creates an incredible intimacy with the people on the screen until it’s like they’re breathing right on you.

The performances are impressive and the one thing that keeps the viewer captivated as there is very little action otherwise. All three starred in the stage production and basically did this for free as the budget was so low that they couldn’t be paid upfront and were promised a percentage of the profits if the film went into the black. Shaw is particularly interesting as he has played so many dominating characters in the past that watching him portray someone who is shy and unassuming and still do it with equal effectiveness is a testament to his talents while Pleasence, who wears heavy make-up to make him look much older than he really was, is almost unrecognizable.

My only complaint is that not enough happens. I’ve seen and enjoyed many of Pinter’s other plays that were turned into films and although this one is well crafted it still lacks the necessary payoff. I kept waiting for that great dramatic moment that seems from the very beginning to be just bubbling underneath the surface, but it never materializes. I wanted more of an arch that the characters and material seemed ripe for and to have it just end the way it began with not much occurring in between is a real disappointment. Again, the performance and camerawork keep you captivated, but it all adds up to being much ado about nothing and the story’s ultimate message/point being quite murky.